Football Tactics Board: The 4-3-3 Formation explained

Welcome to another installment of the Football Tactics Board, part of the Football Coach series here. This time around we will examine one of football's golden children: the 4-3-3 formation.

The 4 3 3 formation is a descendant of the 'metodo' 2 5 3 formation, developed by Italian manager Vittorio Pozzi in the 30s. With it, Pozzi drove Italy to consecutive World Cups in 1934 and 38. The 4-3-3 developed when there arose a necessity for the two side midfielders to be dropped back to defence for greater defensive stability.

The formation caught up even with the stubborn 4-2-4 Brazilians in '62 and Ajax in the early 70s.

Rinus Michels and Johan Cruyff must have felt like they were sitting on a gold mine, because from it developed Total Football, and then Tiki-Taka. In fact, they loved it so much they evangelically propagated it wherever they went - just as Pep Guardiola is doing nowadays.

What is the idea behind it?

One of the formation’s main strengths is the appliance of total control of the midfield by means of a trio of technically gifted midfielders. The natural development of this idea of control of midfield is to offensively overwhelm the opposition. This is achieved by means of four players who are attacking from the sides, two creators who are backed by a dedicated defensive midfielder and a clear forward – all in all seven players could join the attack at any given time making it extremely tricky to defend against. This is done by means of triangles which are a very effective way of out-passing and pressurising the opposition. 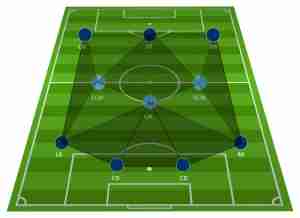 What types of players are needed for the respective positions?

The 4-3-3 has evolved into one of the most complicated and elaborate systems in football. It requires players to have sufficient tactical know-how and quick minds to be able to adapt to the changing circumstances this system brings - not all teams have that.

The formation relies on a single centre forward who is pinned down by a variety of responsibilities. He must be good at holding ball while his wide and midfield teammates make runs around him. This position is usually suited for big and strong players who have great passing and shooting abilities, but are also capable of reading the game very well. The centre forward is one who usually uncharacteristically self-less in this formation.

For successful appliance of the 4-3-3 formation, the presence of high-quality midfield-three is a must. Of those three, one is a specialist while the other two are complete players but with slightly different duties. One is a box-to-box player while the other is usually technically gifted and an excellent dribbler with an extraordinary reading of the game. Both are the creators. The one remaining midfielder sits back and covers for them. Once again, great reading of the game is required which contributes to accurate positioning to break up the play and win back control of the ball.

The peculiarity of back-four in this system hides in the duties of the full-backs. As the most overworked players on the pitch, their responsibilities include incessantly rushing down the sides in support of attack and defence. This is why it is extremely important for them to be tactically and positionally acute.

This formation relies on the skill of the players, and often it is very difficult to oppose it should world-class players cover most of the positions. Technically, the formation is heavily reliant on pin-point tactical accuracy - discipline in other words. This is especially true when the ball is lost because the attacking players leave a lot of space behind them.

The formation is vulnerable to counter-attacks as the spaces can be exploited by quick players. 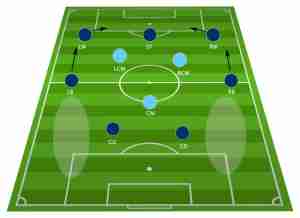 Another way to beat the system is place four players in a diamond formation in central midfield in bid to gain advantage in numbers. 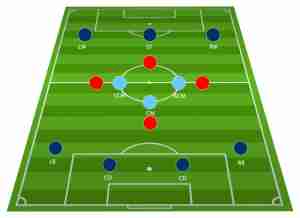 The 4-3-3 is like a painting. You need a good painter if it is to be good.  History has witnessed most of football’s great feats occurring under the structure of this system because it was often applied by managers to suit the quality of the players at their disposal.

Reinus Michels revolutionized Ajax in early 70s, effectively laying the grounds for future use of 4-3-3. They called it Total Football. Ajax went on to dominate for almost a decade, winning the European Cup for three successive years.

Cruyff would later set the foundations of modern tiki-taka at Barcelona in the mid-90s. The tradition was then taken up by Pep Guardiola who broke down the 4-3-3 into a 4-2-1-3 with Xavi and Iniesta at the heart of it and Lionel Messi in a free role.

The Dutch national team also mirrored Barcelona’s progression of tactics but to a less successful degree. The Oranges dominated the mid and late-70s but often stumbled in the final stages of big competitions, mainly due to what came to be known as the German football machine.

Although the 4-3-3 has proven quite successful as it is, it has undergone some masterstrokes here and there. For example, the 4-3-1-2 is a slightly narrower set up than its mother formation while the 4-1-2-3 is the one Pep Guardiola used during his Barcelona success.

Former Juventus defender Leonardo Bonucci shocked many when he decided to move to rivals AC Milan this summer. The veteran centre-back's move to the Rossoneri eve...