Often the essence of football hides not in the number of goals scored but how they were scored. In this feature, we delve into the tactical beauty of the game through our attempt at explaining  one of the oldest but rarely-used tactics in football – the 4-2-4 formation.

The 4-2-4 formation originated in the early 1950s in Brazil and Hungary, but it wasn’t until the late 50s that the system was perfected by the Brazilians. Palmeiras and Santos are the two Brazilian clubs credited with using the 4-2-4 successfully for the first time in club football. The 1970 World Cup victory by Brazil seemed to boost the popularity of this formation temporarily, but the glaring weaknesses, once revealed, led to its replacement by more balanced formations like the 4-3-3.

The 4-2-4 formation is fundamentally suited to reap the maximum dividends off counter-attacks. Its forward advantage remains its sole strength with teams possessing the ability to take the opposition by surprise and score goals with as many as four men in the front.

The strategy is simple – when the opposition attacks, their full backs are taken out of position, leaving the forwards of the defending team unmarked. As soon as possession changes feet, the team with 4-2-4 attacks with swift passing thus outnumbering the opposition in their own half and poaching a goal on the counter-attack.

The system recognizes four players in the front line - two strikers playing centrally close to each other, and two wingers playing high up. It is a prerequisite for wingers to have that burst of speed that allows them to get into position and deliver to the target man whenever opportunity arises. They must be good at crossing and have the ability to read the movement of the oppositional defenders well.

The center forwards are required to create space for themselves and to possess enough stamina to press the center backs throughout the entire duration of the game. It is important for them to have fantastic finishing abilities, since chances are usually limited with this formation, and the players need to make most of whatever they get in order to win matches.

Players with high stamina are the key to the midfield in the 4-2-4 as they hold a ton of responsibilities, including winning the ball back, creating chances with loose balls, and falling back to assist the defence. Midfielders like N'Golo Kante are ideal for this position.

The defenders are expected to be good at aerial play since winning and distributing headers become immensely significant during attacks from the opposition. The full backs are needed to prioritize tackling and coordination with the center backs instead of accelerating down the flanks.

It is not without reason that the 4-2-4 is rarely used nowadays. The formation relies too much on attack and defence, thereby exposing the midfield and making the whole side unbalanced in the process. The two central midfielders can be outnumbered by a 3-man midfield – as in a 4-3-3 – where the extra midfielder enjoys possession and effectively controls the direction and pace of the game. 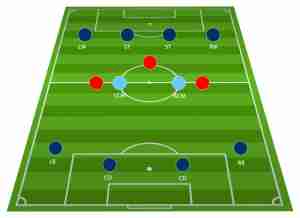 Moreover, the enormous gaps left in the flanks invite constant pressure by the opposition full-backs and wingers. This particularly becomes a headache when the opposition is strong in counter-attacking play. Most of the bigger teams allocate high value to midfield control and are hence not too eager to play the 4-2-4 where the midfield is compromised in favor of the front line. 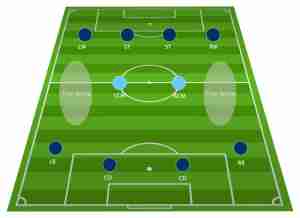 Cohesion also appears to be a problem, especially along the flanks. The 4-2-4 tactic dictates that the wingers will rush forward the moment the team has possession, which leaves a wide stretch of grass between them and the full backs. Since the full backs are not attack-minded, it becomes a genuine problem to feed the front line bypassing the midfielders. Overlapping with the wingers almost never occurs.

Successful examples of the 4-2-4 application

The 1970 World Cup winning Brazilian team – often touted as the greatest ever squad to have played in the World Cups – is probably the most significant example of a side using the 4-2-4 with astonishing success. The tactical requirements of the 4-2-4 strategy were in harmony with the attacking mindset and extraordinary abilities of Pele, Garincha and company.

More recently, Antonio Conte has been known to introduce the 4-2-4 in Serie B football while managing Bari, and Siena. Both teams enjoyed decent success under this system, earning promotion to Serie A. It is often argued that Conte used this setup at Juventus as well, but the man himself has refused to admit this time and again, saying his team was more of a 4-4-2 variation.

After taking charge of the proceedings at Stamford Bridge, Conte began Chelsea’s 2016 season with the 4-2-4, but soon learnt his mistake after succumbing to defeats against Liverpool and Arsenal. He admitted that the Blues were lacking in balance – a fact that is emphasized by Chelsea’s inability to keep clean sheets during that period.

Not too many variations of the 4-2-4 are known to exist. Being one of the oldest formations in the game, it gave rise to the more stable 4-4-2 and the 4-2-2-2 later on. Several variations of the 4-4-2 have since been used by managers across the world.

MORE: Take a look at our analysis of the 4-3-3 formation.

If you enjoyed this article, let us know by subscribing to our notification system.

Please note that for the foreseeable future Sittingbourne will be playing home games at Woodstock Park’s ground. About Bourne Park After years of uncertainty, Sittingbourne now have a...