The emergence of the 4-2-3-1 formation on the footballing radar has been sudden and game-changing. In spite of being a flexible system that is difficult to understand and master, this set up has taken the football world by storm with players and managers across the globe opting for it. As we attempt to analyze and comprehend the nuances of the formation, we also appreciate the reason behind its popularity in modern days.

Former Real Sociedad coach Juanma Lillo is generally credited for introducing the 4-2-3-1 formation into the game. It became an instant hit with numerous Spanish teams adopting the style in the 1990s before it spread throughout the world in the early years of the new millennium.

Numerous sides – Liverpool under Rafael Benitez, Bayern Munich under Jupp Heynckes – have used it successfully. In modern times, this formation has been put on display by the Belgian, French, Dutch, German, and even Brazilian national teams.

The main points in the 4-2-3-1 are absorbing pressure, regaining possession quickly, and snapping into attack mode with astonishing force. The two defensive midfielders – also known as ‘double pivots’ – are essential to the system as they ensure that space left in front of the defence is catered for at all times. Once possession in won, they push forward along with the full backs, and the wingers try to get inside to assist the striker and the No. 10. If possession is lost, the wide distribution of players across the pitch ensures that the ball is regained as early as possible without the back line being broken. This is usually made possible by players pressing in the midfield region in order to outnumber the opposition.

The striker is required to be high on physical attributes, since he needs to hold off defenders and create chances for himself and his teammates. He must be a typical center forward who is tall and good at heading. The formation ensures he won’t lack support, but he needs to be solid enough to convert those chances.

The No. 10 is the quintessential ‘playmaker’ in the team, capable of creative football just behind the striker. The two wider players shoulder the duty of leading attacks along the flanks and cutting in to help the striker when necessary. The formation may often change to 4-3-3 when the team enjoys possession. The two central defensive midfielders provide the platform on which attacks are created after regaining possession. The two must have precise positional sense and must complement each other perfectly. One of the two players is usually entrusted with the job of clearing attacks through tackling, while the other is more attack-oriented, and is the one to launch attacks through quick passing. These two often swap roles in order to avoid predictability and confuse the opposition.

The central defenders have duties similar to those in other formations with a back four. Their primary job is to clear balls and repel attacks through tackles, heading and marking. They may often create passing triangles with the central defensive midfielders when position is regained. The full backs, in contrast, are expected to be swift and capable of clearing attacks by opposition wingers as well as launch wide attacks themselves.

The 4-2-3-1 is an extremely flexible system, and it’s not at all easy to break into the system and exploit its weaknesses. The central point of attack in this formation focuses on the attack-minded central midfielder being supplied passes from the surrounding players.

While it isn’t easy to outnumber a five-man midfield, it is possible (via formations like 3-5-2) to maintain high pressure through zonal and man marking, and alienate the lone striker in the process. 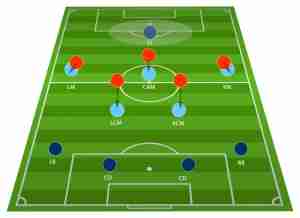 Once the supply of balls to the striker is cut off, pressure on the system increases, and the players are inclined to commit errors. It is important to capitalize on these errors and convert chances as much as possible, since the 4-2-3-1 is set up in a way to regain the ball quickly.

During his Liverpool days, Benitez used Javier Mascherano and Xabi Alonso as the two central defensive midfielders, and Steven Gerrard as the playmaker in advanced position. Alonso’s defensive discipline and range of passing made him an exemplary player in that role. Gerrard, acting just behind Fernando Torres, enjoyed the duty of supplying balls to the latter and dropping back when the ball was lost.

The Spanish, French, and German sides have been known to use this system on several platforms, sometimes with slight variations. The Brazilian 4-2-3-1 is mildly different to the conventional set up since it looks more like the 4-2-4 of the 1970s with two wingers working high up the pitch and one of the forwards dropping back and working behind the ‘center forward’.

Variations of the 4-2-3-1 can be presented by deploying traditional wingers, wide midfielders or inverted wingers. The crux of the formation, however, continues to lie in the double ‘pivot’ guarding the front of the back-line.

The word Thamesmead normally drives fear into the heart of South East Londoners.  The town was seen as innovative when it was constructed in the late Sixties on the old Royal Arsenal site...