Welcome to the Football tactics board. This time around we take a look at the 4-2-2-2 formation, also called ‘the Magic Rectangle’ or ‘Magic Boxes’ for reasons we are about to explore.

The 4-2-2-2 was first put to use by Albert Batteux, and was responsible for the domination of Stade de Reims in the 1950s. The formation found fruitful soil in South America, in Chile, Columbia, Ecuador and Brazil, but its first major use on the big international scene was by Michael Hidalgo in the France national side during the 1982 World Cup.

The tradition was taken up by Vanderlei Luxemburgo who utilised it with moderate success during his years at Real Madrid. Manuel Pellegrini used it when he was at Villarreal and later at Manchester City.

This is achieved by utilizing two defensive midfielders to protect the back-four, practically giving the front four the freedom to attack with the support of the full-backs. The two midfielders further up the pitch play wider but also cut inside to support the two attackers which allows for the wing-backs on either side to overlap, adding another dimension to attack.

The idea is to overload the attacking line with no less than six players. The wings are relatively vulnerable here but opponent plays there are seen as collateral and capable of doing limited damage as they need to move centre-wise to score.

Due to the fluidity of the system, the strikers need not be specialists but they need to have excellent passing ability. They need to be capable of playing in midfield too. Someone in the mould of Wayne Rooney or Dennis Bergkamp will do wonders in this formation. This is because one of the two forwards up front will need to drop back on attack, allowing for the attacking midfielders to overlap as well as supporting the main striker.

The two attacking midfielders have multi-functional responsibilities and for that reason the need to be all around good midfielders – good technical ability, passing and relatively tireless. This is because on attack they have the choice to run on the wings or cut inside to support the strikers, but on defending they need to track back, either to the wings where the system is vulnerable or to their defensive backs in bid to overwhelm the opposition with superior numbers.

The defensive midfielders are the only specialists the system requires. Their main responsibility is to provide cover for the defense. What is crucial here is that they have great passing ability; preferably long-ball adroitness too as it is down to them to compensate for the system’s weakness between defense and attack.

The wing-backs are under enormous pressure in this system. They have to run forwards and overlap with the attacking midfielders, seeking for the free space their teammates leave behind. But they also have to be constantly aware of what’s going on behind them and should track back to provide wide cover for the two central defenders. They should posses bags of stamina and great crossing abilities.

Since this formation focuses on attacks from the centre, therein lies the key to beating it, as paradoxically as it sounds. The strength of the system is its fluidity to convert into other formations quickly, but the wide attacking midfielders leave a huge gaping hole right in the middle between defense and attack.

One way to beat it is to field five men in midfield in bid to gain advantage in numbers and run the triangles around the two defensive midfielders. 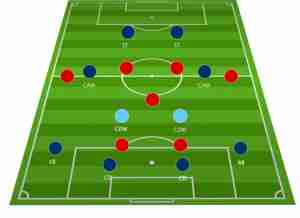 Another way is to overload the wings. The wing-backs in the 4-2-2-2 are probably to most overworked players on the pitch and by fielding two wingers on top of two supporting backs to face them could push them to breaking point.

Manuel Pellegrini’s application of the system has driven two of his teams to success. The Chilean was responsible for Villarreal reaching the Champions League semi-final in 2006 by adopting the 4-2-2-2.

He later drove Manchester City to their first title in over 50 years with Yaya Toure and Fernando as the defensive heart of his midfield and Sergio Aguero as his support striker.

Roberto Mancini later took on the 4-2-2-2 tradition, bringing in Mario Balotteli as Aguero’s front-line partner and replacing Fernando with Gareth Barry with great success. The Italian drove City to another title in 2013 with a victory of 6-1 against rivals United remaining as the crown gem of this campaign.

The flexibility of the system is what makes it highly variable. It can transform into several other systems with a mere substitute, or the two wide attacking midfielders could be instructed to move the more backward position by default, making it a 4-4-2.

Or one of the front two could drop back to add balance into midfield and make it a 4-2-3-1. The possibilities with the Magic Rectangle are endless.