Portrait of a Legend: Didier Drogba

After having helped Ivory Coast qualify for the World Cup in Germany In 2006, Didier Drogba appeared on national television surrounded by his teammates, fell to his knees and pleaded the warring factions in his country to lay down their weapons after five years of civil strife. Within a week, a ceasefire had been called. Within a year, the war had ended.

Such was the impact Drogba exercised on people in Ivory Coast. His portraits adorn brittle walls and billboards round every corner. Word of his arrival spreads quickly and people amass to cheer for him. People name their children on him.

Drogba is a national superstar, but he doesn’t see it that way. He came from humble roots of a bare-footed childhood, playing football with plastic trophy-bottles full of candy in Abidjan, Ivory Coast. That was so until he left for France to live with his uncle Michel Goba when he was five years old.

‘Being uprooted–however willingly–leaves its mark on a person.’ Drogba wrote later in his autobiography. ‘When that person is a five-year-old boy, who leaves behind everything he has ever known, his mother, his father, his family, his home, this cannot but shape him.’

His first uprooting would lead into a sequence of others in what would turn out to be a nomadic life. Deep down the need for a stable home would persist, and also a dream of becoming a professional footballer.

Drogba was lucky to have an uncle who played as a striker for local clubs in France. Goba taught young Drogba how to jump and position himself. Drogba shadowed his uncle wherever his career took him and playing in local amateur youth clubs in his free time. But if Goba was an avid footballer, Drogba’s father never considered football to be a proper profession. In his eyes, the son had to focus on school and forget about football.

Squeezed between his father’s expectations and his love for football, Drogba took a year-long break. It was when he was 20 when he received his first proper opportunity when Le Mans promoted him to their first team. His performances there would catch the eye of no other than France’s biggest club: PSG. In 2002, they approached Drogba with a lucrative deal which included £700 a month and eight pairs of Nike boots. For Drogba who had to save for months to buy boots to play with, it wasan offer madein heaven. But the deal soon took a downturn when PSG’s representatives learned about his injury-proneness. They told young Drogba to wait, left the room and never returned. Drogba waited for hours. He vowed to never play for them. 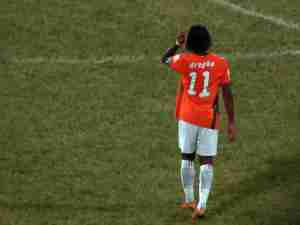 But Drogba was too good to remain unnoticed. Soon after, League One club Guingamp offered him a way into professional football. He gladly signed it and spent the next 18 months there, scoring 20 goals in 45 appearances. He received his first Ivory Coast call-up then and came second in African Player of the Year.

By then word had spread to Marsellie who gladly coughed up £4 million for his services. For Drogba this was it. He had cherished Marsellie since he was a child, and there he was on the grass at Stade Velodrome. He was 24 then, butforthefirsttime he knew he had made it as a pro. From the bare-footed kid playing on the African dust, Drogba stood under the blinding lights in line with his teammates as the Champions League anthem played out.

By then niggling injuries had forced him to hire his own army of personal physiotherapists. Results showed on the pitch. Drogba’s powerful physique allowed him to shield the ball and shuffle for space in the box to use the heading skills he had learned from his uncle. But he was yet to learn that money speaks in football. When Mourinho took the Chelsea reins he had brought a list with him and Drogba’s name had a tick next to it. The two had first met when Marsellie played Porto in the Champions League. Impressed, Mourinho had had pulled Drogba to the side in the tunnel: ‘One day, if I can afford you, I will sign you.’ Well, now he could.

It took considerable convincing from Mourinho and billionaire owner Roman Abramovich for Drogba to leave his Marsellie dream. In Drogba’s eyes, he had achieved his most sacred dream of becoming professional footballer and was playing for his childhood-crush club. The temptation to play under Mourinho who Drogba remembered fondly after their brief exchange earlier was strong. Money also played a factor. There was no looking back. Drogba moved to Chelsea in 2004. 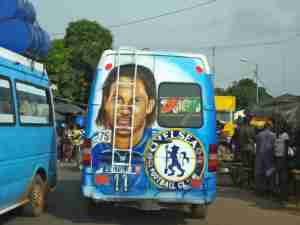 It is at The Blues where he would become a deadly 30+ machine that most Premier League defenders undoubtedly still have nightmares about. Forthat, he had togo through a rough patch first. As strong as he was, Drogba didn’t do himself any favours when he thumped to the ground at the slightest of touches. It was like watching Robocop do ballet: not what he was built to do. Diver, cheater–the labels were sticky. He didn't help it too. He was once asked whether he dived and Drogba, whose English was still shaky, answered: ‘Sometimes, I dive.’

It must have been hard for him to wake up to those three words screaming from the front page of every newspaper in the next morning. He was only mid-way through his second season, but his future at Chelsea already looked bleak enough for him to consider quitting.

If he could take recluse in anything it must have been in the joy of scoring and winning and he didthat exquisitely well. Chelsea strolled to the title that season with 12 points clear of their nearest rival and Drogba helped with 16 goals of his own. Fromthereon, the decision to stay changed his life as a footballer. He had one more weapon at his disposal: he had a knack of scoring in important games too.

He played his part in the Champions League final against Manchester United when he received a red card in extra time–‘a mistake’ he remembers. But he later revealed it was him hitting the post and losing the final he regretted more.

No matter. He redeemed himself three years later when he scored a header against Bayern Munich to level the score in the Champions League final and then converted his penalty to gift Chelsea their first European triumph. He scored in four FA Cup finals, helping Chelsea triumph in all of them. 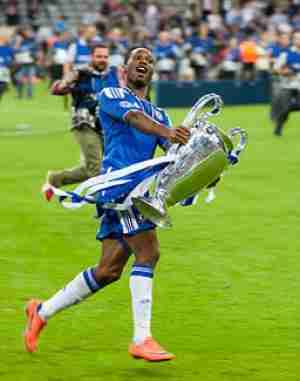 Drogba spent eight glorious years at Chelsea–by far his biggest spell at any club. No wonder, it must have felt like a second home–second only to Ivory Coast. It was place beckoning for him to return some day.

And, of course, he did. When he travelled with his new club Galatasay to play at Stamford Bridge for a Champions League Round of 16 tie, he took his time to greet every Chelsea player even after a 2-0 defeat. It must’ve moved something in Mourinho because two months later Drogba returned to Chelsea for another year.

“He’s someone who made me believe in myself, in my ability, even when I came back to Chelsea second time round.” Drogba later wrote about his relationship with Mourinho. “Even though the team was younger when I joined in 2004, I thought ‘I’m going to show him that I can do it.’ Jose always brought that feeling in me. That’s why we had a unique relationship.”

If his initial years at The Blues were marked with criticism, his last year was one of acknowledgement and acceptance. Drogba had worked his way into Chelsea folklore with the brute force of his feet and head. 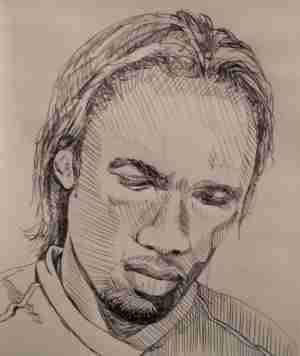 It was a touching and symbolic when Drogba was carried away by his teammates in his last match just as he had carried Chelsea in his last eight years there–a fitting ending with, perhaps, one more stroke left. “Go and come back.” Mourinho told him in the dressing room later. And even though, after leaving Chelsea, Drogba continued to live a nomadic life, he never left in heart Ivory Coast and Chelsea. It was the two places that gave him his roots.

It is revealing how Drogba reached back to his roots after rising to the highest echelons of football.

Football gave him a home, but it also gave him a platform to make a difference and a purpose. He opened charities and visited hospitals and talked to people. The boy that played allthoseyears ago underthe Ivorian sun hadverymuch become themanthatwantedto help those less fortunate in him. That sincerity in him built the bridge between Drogba and Didier.

“I get women coming up and saying, ‘I’ve just had a son, and I called him Drogba.’” he wrote in his autobiography.

“Not Didier but Drogba. That’s crazy, but I now understand and accept how much impact I have had just by scoring goals.”

About Longmead Stadium Tonbridge Angels moved to Longmead Stadium in 1980 after protracted negotiations had dragged on for three years after plans were drawn up by the Council to sell of...