Mohamed Salah has gone from strength to strength since moving to Liverpool  from AS Roma in the summer. The Egyptian star has taken the Premier League by storm with 18 goals and three assists to his name so far. The scary thing is we are just seeing the tip of the iceberg.

His chemistry with fellow forward Sadio Mane has been so electric that it has neutralised the absence of last season's star Philippe Coutinho who has been out treating injuries for a big chunk of the current campaign.

While at FC Basel, the Egyptian dealt a massive blow to Chelsea's aspirations in the Champions League when he bagged the winner in the famous 1-2 victory at Stamford Bridge in 2014.

This performance put him on the radar of the European elite, with two Premier League rivals emerging as main contenders for his signature: Chelsea and Liverpool. Chelsea won the battle then, but Salah has never hidden the fact that he symphatises with Liverpool. There were other factors influencing his decision to move to Chelsea too: mainly Jose Mourinho’s influence and Liverpool’s inability to offer him regular Champions League football.

Salah would go on to make his debut for Chelsea soon after, but securing a more regular first-team spot would be an entirely different matter. 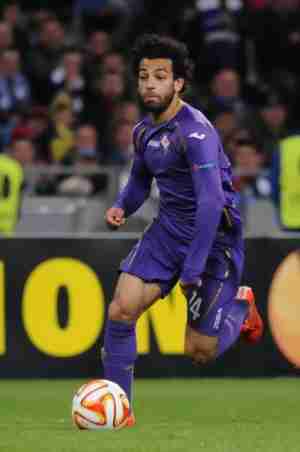 With the likes of Eden Hazard, Demba Ba, Samuel Eto’o, William and Oscar, the Egyptian found himself stuck on the bench for most of the time and was eventually shipped out on loan spells with Fiorentina and Roma.

This led to a permanent move to Roma in 2016, where he teamed up with the likes of Daniel De Rossi and Gervinho. The trio were largely responsible for Roma issuing a title challenge to Juventus that year and reaching the Champions League Round of 16 where they were eliminated by Real Madrid.

Having moved to Liverpool a year earlier, Klopp's revolution at Anfield was in bad need of a hard-working and pacy winger such as Salah. The marriage between club and player would happen a year later, in 2017.

Meanwhile, Chelsea had undergone a revolution of its own.

Mourinho left the club in a somewhat controversial manner in 2015 - only a few months after winning the title. According to stories, this was partly due to conspiracy among the players in the dressing room with Hazard and Fabregas accused of backstabbing the Portuguese Manager.

Through a Guus Hiddink transition, Antonio Conte was hired to take Chelsea forward in 2016. Under Conte, Chelsea saw a tactical revolution that led to the Premier League title.

Back to present day

Salah is almost scoring at will presently while the Blues are in desperate need of goal-scoring prowess, especially with the recent injury of Alvaro Morata. Substitute Michy Batshuayi has also been inconsistent in front of goal this term following the departure of star forward Diego Costa to Athletic Madrid in the summer.

It's safe to say, the Egyptian star would have been a great addition to any of the top sides in Europe. It beguiles he mind to think about a possible trio of him, Alvaro Morata and Eden Hazard. How many goals is that?

But Conte has no right to complain about the consequences of times before he was Chelsea manger. Arguably, he has the same kind of  quality in Willian and Pedro Rodriquez, who still get Chelsea firing as the Blues remain in third spot ahead of Liverpool in the current campaign.

Arguably, Salah would have given the Blues an attacking edge, yes, but Conte and his side still have plenty of firepower. Batshuayi is not completely useless as he still comes up with goals when least expected - he scored a brace against Watford and the decider against Athletico Madrid after coming on as a substitute.

This gives the champions the leverage to march on irrespective of the departure of the high-flying Egyptian.

There is no doubt that, as things stand, Salah would definitely be an improvement to Chelsea. But in the underused Willian, Conte has a viable option and that somehow serves to alleviate the regret of losing the currently best scorer in the league.

More: Willian insists he is happy at Stamford Bridge amidst Man Utd links

This was supposed to be a happy report.  The sun was shining, in fact so much so that it was the hottest October day on record. Lewes were trying to extend their 100% home record and abov...