Conte could replace Batshuayi with Benteke or Vardy

Chelsea boss Antonio Conte is reportedly running out of patience for Michy Batshuayi as the striker is yet to score his first Premier League goal this campaign.

Conte was left hugely disappointed on Saturday as the Blues succumbed to their third defeat this season against Crystal Palace with Batshuayi failing to produce the goods in the absence of injured Alvaro Morata. And now the Chelsea boss is believed to be on the lookout for a new attacking partner for Morata.

The Blues have already identified Christian Benteke, Jamie Vardy and Red Star Belgrade striker Richmond Boakye as possible replacements. The Metro reports that the Blues are planning to send scouts to observe the Ghanaian forward in the Serbian club’s clash with Arsenal tomorrow.

But it is believed Conte would opt for players with more Premier League experience. The Italian is a long-term admirer of Benteke, but the tall forward has had his share of troubles this season, having been ruled out for six weeks due to damage to his knee. 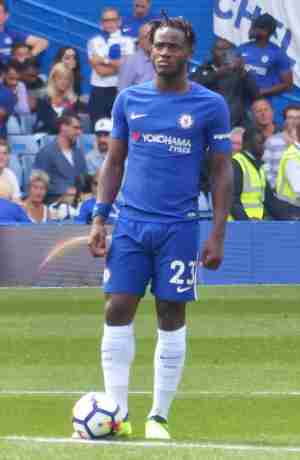 Batshuayi joined Chelsea from Marseille last season. He scored a hat-trick in Chelsea’s 5-1 victory over Nottingham Forest and bagged a late winner against Atletico Madrid in the Champions League earlier this month. But his Premier League performance has been completely overshadowed by new-arrival Morata, who already has 12 goals out of 22 matches.

Conte had to suffer several transfer set-backs this summer which left Chelsea’s squad dangerously thin and vulnerable to injuries. And it seems the Italian manager has already succumbed to the increasing possibility of a failed title-defence bid.

With the winter transfer window fast-approaching, it is believed the Chelsea board will use everything at their disposal to please the Italian and convince him to stay in London. This could make January a very busy month for the Blues.

About Leslie Fields Leslie Field is a relatively basic ground with one small stand sitting within the main club house structure with three rows of plastic seats.  On the opposite side of...