This is one of those games where the 3-4-3 Arsene Wenger has been counting on since the FA Cup semi-final last season might not be the best possible option. 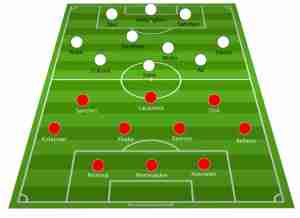 The problem for the Gunners stems from the fact that should Wenger field Xhaka and Ramsey, they would have to play against three: Harry Winks, Delle Ali and Cristian Eriksen. It’s doesn’t sound like an easy task.

With Sead Kolasinac and Hector Bellerin engaged out wide, the Arsenal defensive trio could risk being stretched when engaging in the battle for the centre. This could leave plenty of space for Harry Kane and the speedster Son to settle in and do a variety of damage from.

To solve this problem, Wenger would be safe to field a different formation. The key to the three points will be the battle for the midfield, so either field three to match Pochettino’s selection or the current due will need to be extra vigilant and mobile to deal with the potential passing triangles. Since Xhaka is not known for his mobility, the responsibility will have to fall on Ramsey and, potentially, the front trio to cover in midfield.

Mesut Ozil is not particularly tenacious when defending and that’s another minus in this current setting. Ramsey would have to be extra vigilant and discipline in bid to stay and help Xhaka keep free space in midfield to a minimum. Sanchez and Ozil will have to track back and help in applying pressure too.

It will come to this. Eriksen is in terrific form, having bagged a hat-trick for Denmark to beat Ireland and qualify for the World Cup on Tuesday. Xhaka in the meantime played the full 90 minutes in Switzerland’s goalless draw with Northern Ireland.

The Dane will be hard but not impossible to contain. Xhaka will have to keep an Athena on Eriksen at all times and should be careful not to give the ball away himself. The Swiss should also be encouraged by the potential cover of Laurent Koscielny who will be playing right behind him. Both should work together to deal with Eriksen while Mertesacker covers for the space they leave behind.

This is tough to call. The Belgian defender is considered as one of the best defenders in the Premier League by some. Hard to argue, since he has fitted quite well into Pochettino’s back-three, outplaying Alderweilder regularly for the centre spot at the back.

But faced with Lacazette, Vertonghen will have to make some sacrifices, notably his adventurous spirit which pushes him to roam forward and contribute to attacks. The French striker has hit the ground running since arriving at the Emirates from Lyon and has scored six goals in the last 11 games.

The veteran Arsenal defender finds his sweetest spot in defence sandwiched between Koscielny and Monreal – and this is Kane’s territory. The German may be slow, but with adequate cover, he can pose a formidable challenge to currently the best English striker.

Much of this outcome will be dependent on the battle for the midfield. Should Kane find himself between Mertesacker and Peter Cech, he will hardly forgive and forget.

Aaron Ramsey will have to get used to the feeling of being overworked for this game. He is the Arsenal player on whom the whole outcome of the game might depend. Apart from covering for his midfield partner, Xhaka, Ramsey will have to play Cerberus to England hope Delle Ali. And that’s not an easy task.

Ali is a match-winner. He is coming back from a knee injury, having bagged two goals in Spurs’ dismantling of Real Madrid earlier this month, and should he find his mojo on matchday, he will be very difficult to stop.

Earnest Hemingway once wrote: For sale: Baby shoes, never worn. Packs a punch, doesn’t it? The story he packed inside this sentence is worth writing a book. This is not to say mor...