Arsenal: Top 10 Defenders of All Time

Defenders are often the quiet and responsible workers. They have to sit back and curb impulses to rush forward and be flashy. It takes special discipline to be a defender. It’s not everyone’s cup of tea. Arsenal have been fortunate to have them in flocks.

These are the club’s best defenders in history: 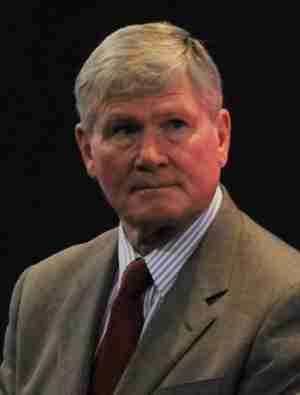 His long and illustrious career started way back in 1967 when he joined the club as an apprentice. He had good sporting examples to look up to in Frank McLintock and Peter Storey and soon he was playing alongside them, getting the double in 1970.

His extraordinary tenacity and consistency took him beyond what others could teach him and not long after the departure of Alan Ball, Rice donned the captain’s armband.

The Irishman helped the Gunners reach five FA Cup finals, winning two of them. He played over 400 games in 13 years at Highbury.

The umbilical cord was cut, temporarily, when he moved to Watford in 1980. Four years later he returned to the club, spending 28 more years there as a coach until his retirement in 2012. 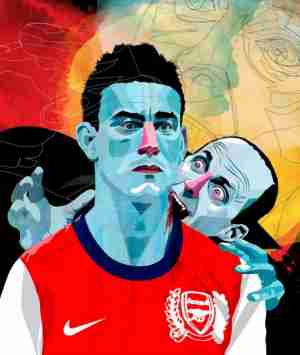 Koscielny is a living example of Wenger’s keen sense for unearthing gems. When he arrived from Llorient for £10 million in 2010, he had little to brag about, not that he ever does.

His first year was a difficult one. Unadjusted to the Premier League, Koscielny made mistakes, his biggest one in the 2-1 defeat against Birmingham in the FA Cup final of 2011. But since then he’s worked his way to becoming irreplaceable at the back, forming standout partnerships with Germans Per Mertesacker and Shkodran Mustafi recently.

With Mertesacker, Koscielny achieved the joint-best defensive record midway through the Premier League season of 2013/14, and even though the club headed the table for most of it, they finished fourth.

The Frenchman continues to play for Arsenal and is considered one of the best in the world. 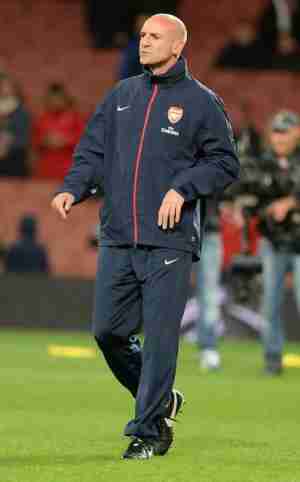 Watching him speak for Arsenal TV, it becomes clear Bould is a man’s man. His calm demeanour speaks of quiet and deep undercurrents of strength, respect and humility. Bould guided many youngsters at the Arsenal Youth Academy where he worked for 11 years after his retirement. He waived equal influence as a player. The hard-face defender was a rock in defence and part of the “famous four” back-line of the 90s.

He joined Arsenal in 1988 and made his way to being a key man in the following seasons, winning several accolades with the club. When Arsene Wenger arrived in 1996, Bould’s advancing age led to speculations he had nothing left to give.

Wenger saw things differently as he continued to rely on him for two more years. Shrugging off competition from Martin Keown, Bould played a crucial role in the double-winning side of 1998. He made 287 appearances for the club as his performances earned him the trust of everyone at Arsenal.

He’s worked with Arsenal for over 28 years and now serves as Wenger’s right-hand man. 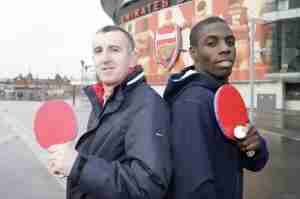 If a perfect left-back existed, Nigel Winterburn came close to fitting the description. His intellect and speed cemented his place in the Famous Back Four while his lightning runs forward carried constant threat to the opposition. But Winterburn was also a good long-range shooter with great ball control, and pin-point crossing, something that helped him rack up more than one assist in his career.

When he started, his way to the left-back position met strong resistance from England star Kenny Sansom, but after brief time at right-back, his chance came. He grabbed hold of it and never let it go.

Dixon was technical right-back, possessing an ambidextrous first touch and boasting a well-developed positioning and reading of the game.

While Dixon established himself as a stable defender, boasting a close to telepathic relationship with the other defenders, his attacking side remained overlooked until Wenger changed to a more offensive formation. His crosses from the right and cutting in posed multi-layered threats for oppositional defenders while his long range shooting often made them wonder who to cover - Winterburn or him.

Dixon played a key role in Arsenal’s success in 1998. He played four more years, fighting off challenges of Oleg Luzhny and Lauren, and winning two doubles.

His Arsenal career spanned over 15 years until 2002. 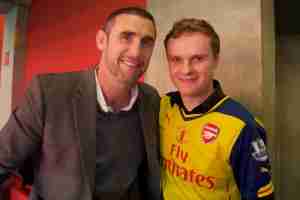 Keown’s first affair with Arsenal was short-lived, from 1985 to 1986. After spells at Aston Villa and Everton, he returned to Arsenal in 1993.  Things were different this time. George Graham had taken over and Keown had built valuable experience from his stints. The new manager’s defensive tactics accommodated Keown well as he formed a fluid partnership with team captain Adams, helping the club win two league titles.

When Wenger inherited Graham’s empire of toughness and tweaked it into a more offensive and fluid one, Keown remained a trusty solid defender. He made many starts and was crucial for the 1998 double. He fought off challenges from Mathew Upson and Pascal Cygan to contribute to the league title of 2002.

By then his joints had stiffened from the years. Keown dug deep to contribute to the Invincible season of 2004, but soon after gave way to a rising Kolo Toure.

He played 449 matches for the Gunners. 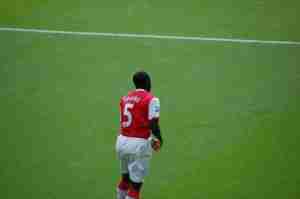 Ray Parlour shared a great inside story about how Wenger signed Kolo Toure. On his trail for Arsenal, Toure faced Thierry Henry and Dennis Bergkamp on the pitch. Before long, he had hard-tackled Henry.

Then in a moment of overcommitment he didn’t notice Wenger standing on the pitch and took him for a ride on the sledge too. That had done it. The Boss was so impressed by Ivoirian’s passion he limped to the offices to sign him the spot. It turned out to be a masterstroke.

Toure played 225 matches in seven years for Arsenal and was an inseparable part of the Invincible squad of 2004.

He provided a much needed backbone after key figures Adams and Keown retired. 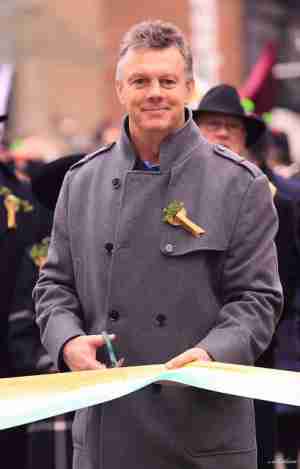 The longest-serving Gunner with 722 matches, David O’Leary occupies No.14 on the all-time Greatest Arsenal players list. But he didn’t get so high on appearances only.

O’Leary oozed class. He graced the back line with his gentle yet commanding demeanour, slender yet powerful physique, and his quickness for his six-foot-high frame.

In 1975, Arsenal’s battle for survival forced them to draw on resources from the Youth Academy. O’Leary was only 17 then, but he shared the responsibilities at the back and helped his club stay in the First Division. By the time George Graham arrived in 1986, O’Leary had turned from a young prospect to club captain.

But his age had advanced.

With Tony Adams and later Steve Bould emerging the Irish defender found less and less playing time and in 1993 he moved to play out his career at Leeds. But not before winning a double in 1993 and the titles of 1989 and 91.

Fear is a word you cannot find in Campbell’s dictionary. A youth product of Tottenham Hotspur, he did not shy away from moving to Arsenal on a free transfer in 2001, after having spent nine years on the other side. He never looked back.

Starting alongside Adams or Keown, he won the double in his first season with the Gunners. Wenger was so impressed by his displays he branded him ‘indestructible’ and made him a first-starter for the next three years. Campbell did not disappoint. He got a Team of the Year spot for the three consecutive years playing a crucial role in the 2003/4 49-game undefeated run.

When Injuries and personal troubles blighted his football, Campbell stood on his own to face them. Before scoring the only goal in the Champions League 2-1 loss to Barcelona in 2006, he fled to Brussels to reflect on his personal life letting no one at the club know. But upon return he led the best defence in the Champions League with a whopping record of 10 matches without a conceded goal.

Campbell played 146 matches over five years for the Gunners and was one of the few who Wenger called on to play for the club again after he had left.

Wenger knew what he had when he came to Arsenal. He had five Englishmen who squinted their eyes trying to understand his heavily accented English, boozed too much and clowned about in the dressing room. He knew he had the best defenders in the Premier League.

Tony Adams’s commanding presence formed the beating heart of this defensive wall of five. He was the orchestrator, leader and a figure of inspiration.

He captained Arsenal for 16 years and scored goals when required.

Adams possessed an extraordinary sense of positioning and great timing in his tackles; this, and the fact, that he and Keown claimed the air for their own. In fact, he was such a formidable defender that strikers chose the path of the least resistance by seeking to go around him.  Asked of which strikers he found most difficult, Adams said: “Those who wouldn’t fight me.”

But he was also an alcoholic. His problems with booze started in the mid 80s. Multiplying incidents among which a car crash and several fights forced Adams to attend to his addiction. His career as a footballer was on the line. Adams never gave up and won the battle, but he couldn’t have done it without Wenger’s new dietary practices and lifestyle changes.

Guardiola sticks to his guns almost fanatically and most of the time he annoyingly succeeds. He won a truck-load of trophies in Catalonia and Germany. But when he fails, the trolls around...