Arsenal: Does the formation change mean Wenger surrendered his values?

The irony is strong when Zlatan Ibrahimovic receives a knee injury threatening to end his career when he  has boasted all throughout to have had complete control over it. It is also strong when Arsene Wenger’s sudden break from a 20-year tactical habit strips Pep Guardiola – one of the most successful managers - of his only chance for a trophy this year. The difference between the two cases is that while Zlatan remains unchanged in his desire to overcome hurdles while Wenger opts for a more uncharacteristic approach.

But what does it mean? Does it really mean Wenger capitulated to the crumbling external pressure or that he’s seen the light?

“We needed the confidence.” he told reporters after Arsenal’s victory over Manchester City in the FA Cup semifinal. The new system, 3-4-3, emulates Contes’ at Chelsea. It allows for structure and security at the back. That’s the main point of it. Even the attacking options are heavily reliant on the two wing-backs who are, ultimately, defensive players. It was Wenger's way of re-building confidence.

Build from the back is what Wenger opted for in his last two games. What he did was he hit an initially wrong-sounding note, which might as well be the missing link between two scales. It's like when you hear a tune with a naively childish vibe: it gets boring after a while. But squeeze in a ‘dark’ note which seems out of place, and the world opens.

The system is counter-intuitive to the ideals that Wenger has set for Arsenal: fluid attacking football – the frame he has been proud of for so many years. Could it be surrender? Is it some kind of PR stunt? Or could Wenger become pragmatic only in extreme situations?

Extreme solution but hardly unjustified. The threat of failing to defend a 20-year Top Four run looms near. The Gunners have never been dispatched so ruthlessly from the Champions League before.

It was Albert Einstein who said ‘Problems cannot be solved by the same level of thinking which created them.’ Under the light of this, Wenger seems to have scrapped idealism in favour of common sense. 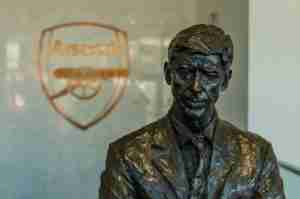 But would we be able to say the same had Arsenal lost their two games in which they used the 3-4-3 system? Probably not.

The thing is: Arsenal under Wenger has become oxymoron: chasing beauty but producing boredom.

It is too early to judge what this change means for Wenger. His career has not always been bound to results on the pitch as in the case of most managers. In a way, he’s had the privilege to remain relatively untouched by the reality of modern day football. So it would be fair to say the change may be seen as positive only if the right results come along. Only when results meet his romanticism.

Only then we could say it worked. But it didn’t. Instead, he changed, at least for a couple of games.

But in those games, Wenger outsmarted his Premier League managerial colleagues. He played a game of chess with them and beat them with a surprising opening.

What we know for certain is a pinch of fear is eating Arsenal: its manager, players, supporters and perhaps even the board. The scenes after the Middlesbrough victory spoke for themselves: the relief and joy of beating a club struggling to survive.

It’s too early to draw conclusions. But what we now know is Wenger and the club seem to have taken steps to shake free of its decade-long spell and have responded to the fans and their environment. If that is surrender for Wenger, I’d choose that any day of the year over watching same old Arsenal.