Share
Tweet
Share
Pins
Share
Like
About Capershotts Capershotts is definitely a work in progress.  The club have grown in stature and position over the past few seasons and that means due to the ground grading work,  alterations need to be made all the time which does give the ground a slight unfinished look.  However, surrounded on three sides by trees you would be hard to image one of the busiest roads in Europe passing a few yards close by.  There is a small (but growing) Maine stand (called such as the seats came from Maine Road!) and a covered terrace behind the goal.  Apart from that it is simple standing.  The pitch used to slope significantly and you can see by what extent on the height of the path around the pitch.  On the far side from the Maine Stand you can get an excellent view above the dugouts due to this situation.  Floodlights came from Walthamstow Park Avenue, and the club are always looking for a few bits and bobs from other grounds. The clubhouse is on the far side of the car park, and fans simply give a nod and a wink to the turnstile operator as they leave and come back in at half time.  There is a tea bar behind the terrace at one end.  Built for joy rather than comfort. How to get to Capershotts A very easy ground to find by car.  Simply exit the M25 at junction 26 and then take the 2nd exit if you are coming Anti-clockwise around the M25 into A121 Honey Lane, or 3rd exit if you are coming around the other way.  At the next roundabout take the 3rd exit into Sewardstone Road and pass over the M25.  The ground is the first right BEFORE the cemetary.  If you pass the Nissan garage you have gone too far.  Parking is free of charge.  Nearest train is Waltham Cross where you can catch a bus to the ground from the bus station opposite the station exit. How to get a ticket for Capershotts With a capacity of 3,500 and a record crowd of less than 500, getting in on the day is never a problem at Capershotts.  Prices are Adults £8, Children just £1 – absolute bargain for Ryman’s football and something the club are very proud of. Our last visit – Waltham Abbey 0 Aveley 2 – March 2010 The great thing about the snow and ice we have been plagued with in England this winter is that when games are postponed, they tend to end up being shoe horned in during the midweek towards the end of the season.  And when they fall on a day when I am in the UK it is too hard to miss…… 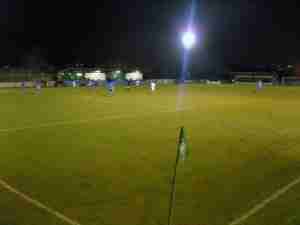 But Tuesday night is normally a CMF girls night out and so I feel obliged that as I am away for work so often I really should let her go and discuss all the finer things in life such as “Would boobs like Jordan’s help in a car crash as air bags”, “How many Mulberry handbags count as an obsession” and “how wonderful my husband was for Valentine’s day”.  But with a will and a fair wind if I went to something localish I could still get back in time for her to make last orders. So at 6.30pm I picked the girls up from the Nanny, and headed north through the Blackwall Tunnel, up the M11 and down the hill on the M25 to one of the easiest grounds in the Ryman’s league to find – Waltham Abbey FC – turn right once you cross the M25 (not literally as that may get quite messy) and follow the entrance road before the cemetery. Waltham Abbey are one of the smaller teams in the Ryman’s Premier.  Promoted last season from the Northern division after a play off win on penalties against Concord Rangers from Canvey Island back in May.  This is the first time they have played at this level, the highest in their history, and whilst the club are enjoying the increased attention, results hadn’t been great.  A few weeks ago relegation looked a certainty but recent results had seen the club climb up a few places and give themselves a shout in terms of survival.  A real six pointer away at Margate on Saturday had seen the Abbotts return with all three points, and now with the visit of Aveley round around the M25 (clockwise) there was an opportunity to climb even further away from the drop zone. 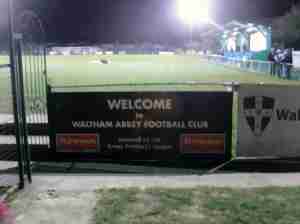 Waltham Abbey is probably more notable for the reputed grave of Harold II, the last Anglo-Saxon King of England, brought here after his death at the Battle of Hastings.  The town takes its name from the Abbey itself.  A substantial part of Waltham Abbey survives from the Middle Ages, and it now used as the parish church. In addition there are a few other remains – the former Gatehouse, a vaulted passage and Harold’s Bridge all in the care of English Heritage.  Enough culture for one paragraph, lets get back to the football. The club were formed in 1944, and under a number of names, played in leagues such as the London Spartans League and the Essex Senior League.  In 2005/06 the club finished runners up to Burnham Ramblers, they were promoted to the Rymans League One North.  After two seasons of consolidated of finishing 10th and 14th they entered the 2008/09 season with some confidence, which eventually saw them finish in 4th place and qualify for the play offs.  Billy Holland was the hero for the home side as his penalty took the Abbotts into unchartered territory. Confidence in the squad was high and this was echoed by striker Ricci Crace, who had recently rejoined the club in an interview he gave for NonLeaguenews24.com:- “Staying up is definitely do-able.  Apart from the top five or six teams, anyone can beat anyone in this league, so we have as much chance as the rest of staying up” 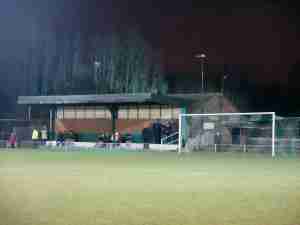 I wasn’t expecting the San Siro when I arrived.  After all the club’s record attendance could fit into our conference room at work, and their average was just over one hundred.  But what I did find was hospitality.  People proud of the club they had built and genuinely pleased to welcome a “new fan”.  Honorary Secretary, Programme Editor and generally Mr Waltham Abbey Derek Bird had been trying to slot in an article or two in the matchday prorgamme for a while, but the weather had thwarted him.  He gave Lolly and me a potted history of the club and the ground and some of the ambitious plans they have.  The club have come a long way in a short period of time, and whilst some visiting fans may be dismissive (Dartford’s hordes will be visiting next month), steady progress and living within their means are the key words here.  With so many fixtures to fit in before the end of the season, essential work on the ground simply cannot be completed.   I am not going to start my rant here about the fixture pile up on clubs, but lets just say it makes people like Derek’s job almost impossible. 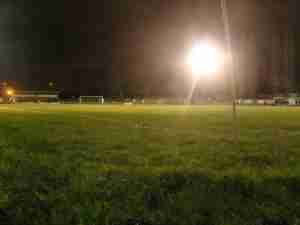 I love football at this level.  Why?  Because everyone involved cares.  Everyone is in this for the love of the game.  Whether it is the fan who has paid is £8 (cheapest in the league btw), the players, the managers, the officials and the referees.  Sure the standard of play may not be up to the level you see on TV but I would much rather be at Capershotts on a Tuesday night watching the Rymans League rather than sitting at home watching Sky show Sunderland v Bolton Wanderers.  I was disappointed not to hear the famous “Captain Pugwash” theme when the teams ran out, and Derek promised to berate the ground announcer for his lapse. Waltham came into the game with the poisoned chalice award of “Ryman’s Team of the Month for February” after their excellent recent form.  Aveley had also been on a bit of a roll too, with three wins in the last four.  We had seen them last week against Canvey Island and I had been impressed with their strength in midfield, and from the first minute that was clearly their strength again.  They made all the early running and if it wasn’t for a couple of good saves from Harry Ricketts in the home goal the deadlock would have been broken earlier than the 27th minute.  And what a decent goal it was too.  An Aveley corner is headed clear but falls to full back Ryan Doyle who volleyed the ball into the net from around 25 yards. 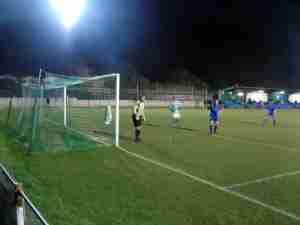 While we are on the subject of nets, have you read Danny Last’s Football Guilty Pleasures yet?  If not read it here.  He talks at length about nets, and remembers the classics at the Dell which were so shallow that the ball often pinged back into play quicker than it went in.  Well the nets at Waltham are cavernous.  You could have a party in these ones.  Rumours are the Horsham keeper is still lost in there somewhere, trying to find the ball from last week.  And balls?  The Yellow Ball, so discussed now on the BBC forums was in favour again.  I asked Derek about this and he said that it theory it should be in play from 1st weekend of November to last weekend of February, but with the cold weather it was still around tonight.  He then told me a little secret, which I promise to tell you dear reader if you promise not to tell anyone else.  Next weekend (20th March) to celebrate Comic Relief, the Rymans League games will be played using, wait for it…..Red Balls!  Red, orange, yellow and white all in one season!  I also noticed this morning that this weekend all games in the Premier League, Spanish La Liga and Italian Serie A will use a one offNike Red Ball. Referees often get a back press on my blog, but Mr Flanagan did a good job.  There was some passion and commitment on display and it often resulted in a couple of late challenges but on the whole he did a good job, calming things down when he needed to and ignoring the clamours from the respective benches for the decisions to go their way.  Half time came and a cup of tea was in order.  And if there is one thing to bring the neutral to Waltham it is the quality of the tea – top draw indeed. 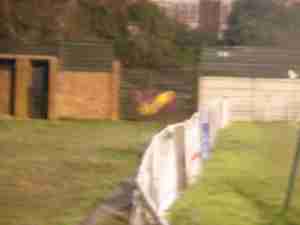 The second half was similar to the first.  Waltham huffed and puffed but they could not get anything past Ollie Morris-Sanders (a Sandhurst name if ever I saw one) in the Aveley goal.  Lolly had a whale of a time fetching the ball on nine occasions.  Good old Wolfie would have died of excitement at such a level of activity.  The second goal was always going to come, and it was our old friend from last week Sherwin Stanley who duly obliged in the 67th minute, putting the game out of reach of the home team, and sending them back into the relegation zone thanks to other results from around the league. With a minute to go we headed for the exit to avoid the car park chaos that dogs all football grounds, even at this level and we were back in TBIR towers before Arsenal had scored their fourth.  Full marks to Waltham Abbey for not forgetting where they have come from and what football means at this level.
Share
Tweet
Share
Pins
Share
Like