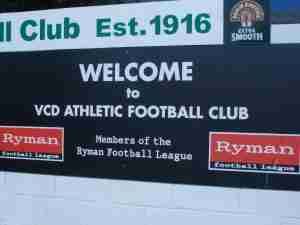 Level four in the non-league pyramid is the highest Vickers have ever played.  Their Old Road ground was first used in 1916 and was the sports ground of the original ammunitions company of the same name.  Very few changes were made to the ground until progress through the Kent leagues became more rapid.  After a groundshare with Thamesmead Town in the late 1990’s whilst permission was granted for the needed ground improvements, the club moved back to their home in 2006.The ground is basic but has so much character.  Surrounded on two sides by green sports fields and with a picnic area as you enter the ground and walk down a windy path.  There is a small stand on either side of the pitch and it can be summed up with the words neat and tidy.  It is hard to imagine over 13,000 once cramming in here for a game against Maidstone United nearly one hundred years ago.How to get to Oakwood

For those coming by car then the easiest way to find the ground is to exit the A2 at the Black Prince/Bexley junction.  Follow signs for Crayford either turning right at the roundabout if you exited the A2 London bound, or straight on if you were Dartford bound.  Follow this road, Bourne Road, until it gets to a T-junction with London Road.  Go straight over into Orchard Hill and follow this up and around to the right.  At the next junction, turn left into Chapel Hill and follow uphill.  At the end turn left into Old Road and the ground is 200 yards on your right hand side.  There is a small car park at the ground, otherwise it is street parking.The nearest station is Crayford which is on the London Charing Cross to Dartford line.  It is a 10-15 minute walk to the ground.  Exit station and at end of road turn left down hill.  At roundabout turn left and continue into Crayford High Street.  Follow this road for its whole length as it goes up hill and bends to left, passing the One Bell pub on the way.  This road then becomes Old Road and the ground is down here on the right.Getting a ticket for Oakwood 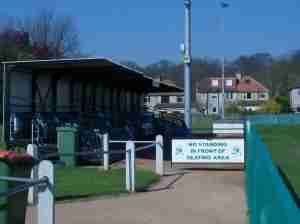 Whilst the ground is small, it is more than ample for the gates that VCD get at the Rymans North level.  If they drew a bigger team then it may be possible that tickets would be needed.  So for now simply turn up on the day and enjoy the Kent countryside.  Admission is £9 for adults and £1 for concessions. Our last visit – July 2011Imagine you were given a task to do.  You were given a clear deadline and despite the fact that you would incur considerable cost in complying, you set about the job in hand. And then imagine how you would feel if part way through the task, with everything on track the goalposts were moved, making it impossible to achieve.  The penalty for not hitting the new deadline? Demotion.

Now take a look at the ground above.  Idyllic isn’t it.  This is Oakwood, home of Vickers Crayford Dartford Athletic.  This was taken a month before a decision was made to expel VCD Athletic from the Ryman League structure.  Their offence?  Well see that pinkish path around the edge of the pitch?  The one that is about 1metre wide?  Well that wasn’t deemed enough.  It needed to be two metres wide.  The club were on course to complete this work by the original stated deadline, but then someone at the league decided to bring that deadline forward for reasons unknown.  The club couldn’t meet that, and despite finishing in their inaugural season in the Ryman League in 8th place, the club were relegated.  Sound harsh?  Indeed.  Especially as their average crowd in that first season was just 93 people, making them the 330th best supported team in England.  As you can see from above, it wouldn’t be hard to fit 93 people in the two stands or randomly around the pitch, but hey-ho these are the same people who have stopped Whitehawk playing at the Withdean Stadium, used by Brighton & Hove Albion for many seasons in levels up to the Championship because it didn’t meet their requirements. 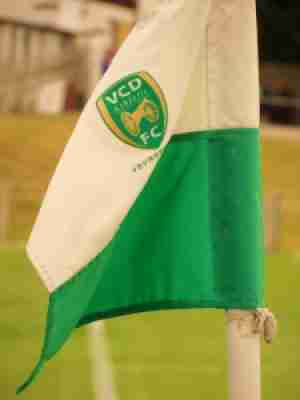 After such a high, the crash down had a major impact on the club.  Manager Paul Foley left to join fellow Kent Premier League side Chatham Town, taking most of the first team squad with him. VCD are quite a unique club.  They were one of a small number formed during the Great War in 1916 as a works team for the armaments factory owned by Vickers.  Up until 2009 they played in the Kent Leagues, finding success in the local cup competitions.  Then Foley was appointed in 2007 and within two years had led the club into the Ryman League for the first time.VCD Athletic 1 Cray Wanderers 2 – The Oakwood – Saturday 23rd July 2011After the delights of watching the Kentish Men, I was back off up the A2 to watch some Men of Kent (or vice versa – I can never remember which way around it is). This in theory should have been an imbalanced content on paper. The teams are separated by two divisions these days and Cray Wanderers enjoyed their finest ever campaign last year and at one point were as high as second in the Ryman Premier League thanks in no part to the prolific form of striker Laurent Hamici. 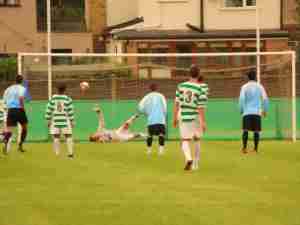 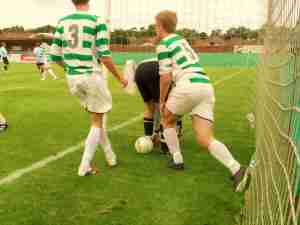 WELCOME BACK TO THE DARK DAYS OF FOOTBALL – Boreham Wood FC

1st May 2010 should go down as the most memorable date in the history for Boreham Wood FC for the reason they finally won promotion to step 2 of the non-league football pyramid.  Unfortun...