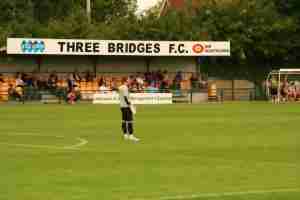 There are few better grounds in the Sussex County League than Three Bridges’s Jubilee Fields.  Located next to the main road, but surrounded by trees on three sides to give a real rural feel.  The club have invested in a decent sized club house with a big bar, a well appointed tea hut, serving mugs of hot drinks and the changing facilities.  On the opposite side of the pitch is a small covered stand and there is also an even smaller one next to the clubhouse that sticks out like a sore thumb. The rest of the ground is just standing behind a new fence but you are close enough to the action not to mind. How to get to Jubilee Fields 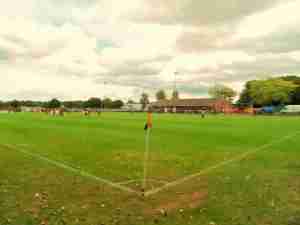 Leave the M23 at Junction 10 heading towards Crawley on the A2011 (Crawley Avenue). At the roundabout take the first left heading towards Three Bridges Train Station (Hazelwick Avenue). Pass Tesco on your left and head straight over the roundabout (second exit). As you approach the traffic lights remain in the right hand side lane. After turning right in to Haslett Avenue at these lights move immediately in to the right turn lane at the next set of lights. Turn right at these lights in to Three Bridges Road. Follow the road round to the left then turn left after one hundred yards in to Jubilee Walk (directly opposite the Plough Pub). Follow the road to the end and turn right (still Jubille Walk) and head straight on where the entrance is.  There is plenty of free parking in the ground, and you can even watch the game from your car! The nearest station is Three Bridges which is one stop south of Gatwick Airport.  Head out of the station and up until the main road.  Turn left onto Haslett Avenue and then use instructions as above.  It is no more than a five minute walk. Admission to Jubilee Fields Admission this season is just £6 and that includes a free parking space next to the pitch and a programme. Our last visit – August 2011 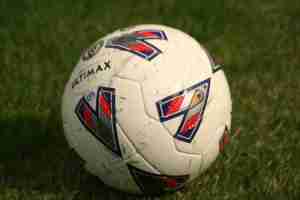 Ever since the Isthmian League eventually got around to publishing the fixtures for the season everyone had been looking forward to this one.  Technically this was Lewes’s local derby.  The Dripping Pan to Horsham’s Goring Mead ground was less than a third of a mile shorter than their traditional rivalry with Hastings United and their Pilot Field ground. An added bonus was the game scheduled for Bank Holiday Monday.  A day just made for football.  And beer. And with Horsham starting off like a train, scoring goals for fun, this was going to be a test for the Rooks. Now here is a fact that I believe is true.  Despite asking all and sundry nobody can give me a definitive answer.  So if I am wrong, please correct me.  Here goes. 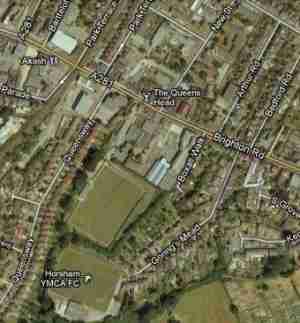 Horsham had two football grounds, which were the closest located in the Football pyramid in the whole of Great Britain.  There – I step back in awe of the amazement in your eyes.  Yes, we all know that the two Dundee teams are located on the same road, and the two teams in Nottingham are separated by the River Trent.  There is also the strange situation with Northwich Victoria and Witton Albion, who built almost identical new grounds less than 250 yards apart, and today we have the grounds at Bedford and Totton. But these grounds were the closest of the lot. Alas the original Horsham ground is no more, consigned to the history books and a car park for a set of flats today. Three seasons ago Horsham FC were in a bit of a financial pickle so agreed to groundshare over the back fence with Horsham YMCA who at the time were in the Ryman League South.  Whilst the long-term plans are still to build a ground of their own, average attendances in the Ryman Premier of 260 mean there seems little financial sense to move, and of course they can groundshare not only with YMCA but also with the Horsham Organ society. But first we had a trailer, an Hors dourves, a warm up event.  The good old Sussex League had realised that men (and some women) like nothing better on a Bank Holiday than seeing a game or two of football.  So why schedule your games at 3pm when other bigger teams are playing when you could stagger your kick offs and get those fans trying to avoid a trip to B&Q or Ikea. It is a win-win situation.  The county league club gets a boost in attendance, as well as in bar takings and us football-deprived fans get to see a bonus game, and of course a few bonus beers.  The only question we had was which club would benefit from our patronage. There was only one real option for us.  With very few direct trains from Brighton and London Bridge to Horsham, we had to factor in a change at Three Bridges (aka east Crawley). And lo and behold, Three Bridges FC were at home literally just over the road.  Game over.  Job done. Let’s talk about value as well for a minute. As we drove into the ground at Jubilee Way in Three Bridges we were asked to pay £6.  Six Pounds! for that sum we got entry, a car parking spot next to the pitch and a programme.  Six pounds wouldn’t even buy you a programme at Wembley, a burger at Arsenal or a pair of special Manchester City shoelaces at whatever that place is called now. And tea – in real mugs.  None of this “we need to take the caps off the bottles sir just in case you fill it with urine and throw it at the ref” stuff. The teams were written up on a whiteboard which immediately saw the groundhoppers (I have said it before and I will say it again I AM NOT A GROUND HOPPER!) furiously scribble down the players names in their notebooks. Three Bridges 2 Hassocks 0 –  Jubilee Field – Monday 29th August 2011 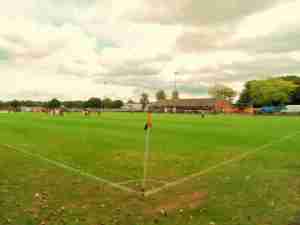 Three Bridges have a tough time these days.  Ask most people where it actually is and you will get blank faces, yet it is one of the most important railway junctions in the South of England.  Technically it is a suburb of Crawley, which of course is now home to a Football League side.  A side that haven’t exactly won many friends in the past few years. It was going to be interesting with Crawley Town without a game on Bank Holiday Monday, how many would come and support their other local team.  Three Bridges average attendance is less than 120; Crawley Town’s 2,500 (not that there are any glory hunters but is was 60% less the previous year).  The official attendance of 117 suggests that they couldn’t be arsed…shame, real shame. 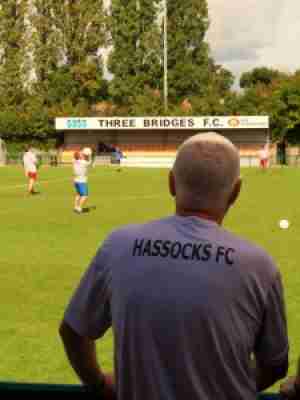 Three Bridges FC were one of the founder members of the Sussex League and have never risen out of the County scene.  Visitors Hassocks were in the same boat however do have a small claim to fame themselves, having been a benefactor of the generosity of Matthew Harding, who essentially started the Chelsea revolution before being tragically killed in a helicopter accident in 1996.  Two of his sons played for the club and today there is an annual junior cup held every year in his honour. As for the game itself?  A thoroughly enjoyable two nil win for the home side.  A first half full of action an incident which saw Three Bridges hit the bar with a shot that bounced so high up into the air the keeper had time to change his gloves before catching it, and Hassocks thinking they had a penalty, with the home keeper starting the walk to the dressing room for the nailed on red card only to see a linesman’s flag up for offside. The drama didn’t stop at half time either when Deaksy won another raffle.  He has a habit of doing this, and he has kitted out his flat with the prizes he has won in the past.  Today, it was a box of shortbread.  Not just any shortbread – a box of Sainsbury’s Taste the Difference shortbread.  What more could you want with your cup of tea. Full time (more pictures from Three Bridges can be found here)
Share
Tweet
Share
Pins
Share
Like

I can already hear the objections to my next sentence. Twenty years is a long time in life. No, it isn't? To those who have fallen over the deadly edge of life of 35-40, 20 years mi...