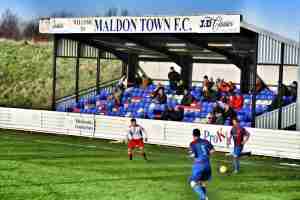 On a wintery midweek night, the Wallace Binder is hard to love, but come here in daylight and when the mood is more temperate and it is a nice little non league ground perfect for the level the club are at.  One small stand sits across the halfway line whilst at one end there is a small newer stand of a few rows of seats.  Apart from that it is standing along side of pitch.  On the club house side there is a small covered section that forms part of the strange tunnel/dug out structure. The club house is very good for a club at this level, with two big screens and plenty of chilled Spitfire. How to find the Wallace Binder Ground From either direction off the A12, exit junction 18 signposed A414 to Maldon. Take the 3rd exit off roundabout onto Maldon Road / A414 and follow through the pretty village of Denbury. Eventually you will reach a main roundabout, take 1st exit, still signposed Maldon and A414. At the next roundabout, where Morrisons is located take the third exit into Limebrook Way. Follow this over 1st round about and then at the next one take 2nd exit into Park Drive. The ground is then on your left hand side. There is ample free parking at the ground, or next door in the leisure centre car park. The nearest train station is at Hatfield Peverel, which is a around 5 miles away and would require a cab to reach Maldon. Admission to the Wallace Binder Ground It is £8 for Adults, Concessions £5.  Programmes (£2) can be bought on the turnstiles.  Once inside you can access the club bar. Our last visit – January 2013 Headlines should tell a story, but be cunningly cryptic to entice the reader in for more.  Today I had so much to play with, especially as the result was a foregone conclusion.  But this is the game we all love so much for its unpredictability so I had to rethink.  Therefore before we start I thought I would explain what my title actually means:- 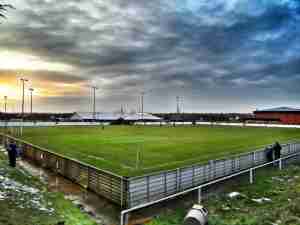 “Maldon and Tiptree” – home team “Assalted” – not a misspelling but a pun on the fact that Maldon is famous for its sea salt production “by” – preposition meaning near to or through a medium “Jammy” – a pun on the fact that Tiptree is globally famous for its jam still manufactured today by J Wilkins & Sons “Motormen” – nickname of the away team Redbridge FC So there we have the full explanation, you can read on. With the cold snap giving way to rapid melting, for what seems like the millionth weekend in a row, the Non League football calendar was decimated once again.  Many games hadn’t even made it to Saturday and by lunchtime my options were being decreased by the minute.  However, my first option (after Lewes’s inevitable postponement away to snowy Wingate & Finchley) was still on, and on without a pitch inspection planned.  I was off to the deepest corner of Essex to the home of salt and jam.  Welcome to Maldon and Tiptree. The two towns aren’t really next to each other.  In fact Maldon and Heybridge are neighbours, divided by Chelmer and Blackwater Navigation, one of the closest rivalries in the Isthmian league.  But Maldon Town and Tiptree United decided to join forces instead back in 2009 through the vision of the Tiptree Chairman who saw an opportunity to be THE premier footballing team in the South-Western Chelmsford area.  Who said football chairman were power-hungry meglomaniacs? 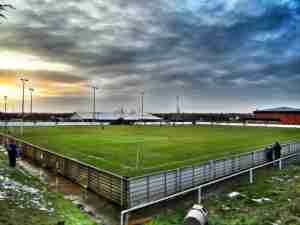 After seasons of mid-table performances in the Isthmian league, this year saw the start of something special.  The Blues started the season with a bang of gigantic proportions.  After draws in two of their first three league games, they went on a winning run of fourteen consecutive Ryman League matches.  Their run was only ended in the Boxing Day derby at Heybridge when they suffered their first defeat of the season, and indeed was the first time they had failed to score a goal in ninety minutes.  The league title still seemed all but wrapped up.  And then for some unknown reason they took the effect of the defeat into the New Year.  An unconvincing 3-0 win away at bottom of the table Ilford was followed up by a nil nil draw to Waltham Abbey, the first points the team had dropped at home all season.  Surely lightning wouldn’t strike twice with the visit of Redbridge, themselves desperately trying to stay out of the relegation zone?  The stats suggested a banker home win.  Maldon & Tiptree were a mere 47 points above their visitors, with a goal difference of 90 between the two. In the run up to the game, Maldon & Tiptree had strengthened their squad with the signing of Lee Boylan.  Anyone who knows anything about Non League football will know the name.  Lee started off at West Ham, playing in the same youth team squad as Rio Ferdinand and Frank Lampard.  I remember seeing him terrorise Liverpool in the 1996 Youth Cup final at Anfield which included the likes of Michael Owen, Jamie Carragher and Steven Gerrard for the home side.  Once released by West Ham he gravitated to the local non leagues, scoring goals for fun including 148 in 178 games for Canvey Island.  Whilst coming to the end of a “what might have been” career, he was a great addition for the club and his goals would undoubtedly help them get back on track. On the other side of the pitch would be a player who was an even bigger name in non league scoring circles.  Redbridge’s manager these days is none other than Steve Portway, a man who was one of the most feared strikers in the non leagues back in the 1980’s and 1990’s.  We were lucky to interview Steve a few years ago about his record-breaking scoring at Gravesend & Northfleet (read all about it here, as Emeli Sandé would say) but he still hadn’t hung his boots up just yet as in recent weeks he had been called upon to play, even starting in the game a few weeks ago against Waltham Forest despite the fact he was now 50 years old.  Now that is what Non League football is all about! 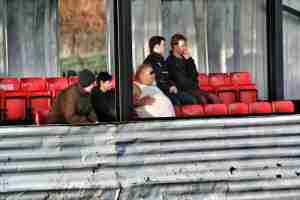 I arrived early, just in case any snow moving was required, but it seems all the hard work had been done so I headed for the bar.  ITV were showing the Stoke City v Man City game live.  It had also been on BBC 5 Live and Talksport, complete overkill but something that we have come to expect these days.  I mean there was only a small matter of Non League v Premier League in two other FA Cup ties.  I took up a place at the bar and was soon joined by a chap in a vest and shorts.  Whilst it was warm in the bar, I felt he may have been under dressed for the occasion.  Of course, he was probably going to stay in the bar whilst the game went on, or slip into a large onesie?  Nope, at 2.55pm he wandered outside as he was, into the freezing afternoon and took his season in the stand. Welcome to Essex. Maldon & Tiptree 2 Redbridge 2 – Wallace Binder Ground – Saturday 26th January 2013 As the final whistle blew the Redbridge players celebrated as if they had won the cup.  This was a massive shock in terms of league position and even current form.  Whilst the home side had “wobbled” recently, they had still won 3 of their last 5 games, whilst Redbridge had managed just one win and had been thumped 11-0 at Heybridge a few weeks previous.  The away side could also only name 3 substitutes and confidence in the first half seemed to have taken the wrong turning off the A12.  But from somewhere they hauled themselves back from 2-0 down with fifteen minutes to play.  Yes, they had a slice of luck, but the home side also needed a fair portion themselves to stop Redbridge taking all three points in the end. Maldon & Tiptree started as you would have expected in this game.  They wanted to win the game as early as possible.  They battered Redbridge in the opening exchanges, creating chance upon chance for Boylan but a combination of inspired goalkeeping and the linesman’s flag kept him out.  In the first period they hit the woodwork three times, and Redbridge took every advantage to slow the game down.  Somehow the game was scoreless at half time. 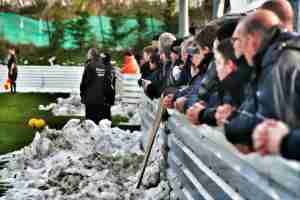 After some liquid refreshment at half time and a communal laugh at Harry Redknapp’s performance at Loftus Road, it was time for the second period.  Surely Maldon and Tiptree would now exert their superiority?  Yes, they would, although it took a controversal decision to see them take the lead.  Lee Boylan’s header was ruled to have crossed the line by a linesman.  I had been joined by Ipswich Town fan Alasdair Ross and we were pretty much level with the goal line but it didn’t look in to us.  Apparently these things even themselves up at the end of the season which is one of the biggest load of bollocks spoken in football, along with “it’s harder to play against 10 men than 11”, and “2-0 is the most dangerous scoreline in football”.  I mean, a two goal advantage, dangerous? Whatever next. Maldon increased their lead when that man Boylan made no mistake after a neat through ball and it appeared that Redbridge’s spirit was broken.  But out of nothing with just ten minutes to play Jacob Cleaver slotted home from close range after a cross from the left wasn’t cleared.  Game on?  Surely not.  Maldon & Tiptree still looked in control and with the daylight vanishing over the lowlands of the Essex savannah they prepared themselves for one last assault to bury the game.  A backpass to keeper Joe Wright was to be launched upfield, but the ball hit a divot just as he went to kick it and it appeared to bend like a banana (it may have hit a defender bit from our distant appearance) behind him and Cleaver who had chased the ball down slotted the ball into the net.  Two-nil had indeed been the most dangerous scoreline in football for Maldon.  It could have been worse as in injury time as Cleaver nearly had a hatrick, seeing his effort tipped onto the post. 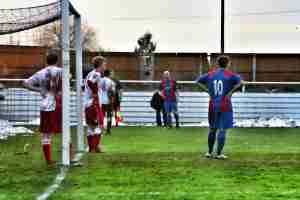 So you can understand the jubilation at full time.  They came into the game with a depleted squad, already written off by everyone, fell two goals behind with just 15 minutes to play against the runaway leaders.  But spirit, resolve and a slice of luck saw them come away with a point.  Don’t you bloody love football? I am sure the Maldon & Tiptree wobbles will be righted soon.  They had a strong looking team, and with the addition of Boylan, they will score bundles of goals.  I fully expect to see a revisit here next year when Lewes are playing.  Perhaps it could be in the Summer or Spring though when it’s not so cold, or the thawing slush doesn’t leave your feet soaking wet.  But then again, what on earth will Mr.Vest and Shorts be wearing then?  I shudder to think.
Share
Tweet
Share
Pins
Share
Like

Red Star Belgrade striker Richmond Boakye has revealed that he would love to join Chelsea should manager Antonio Conte assure him of a starting spot. Chelsea sent scouts to wat...