Share
Tweet
Share
Pins
Share
Like
er Division where they have played ever since.  The original Moorlands club were formed in 1989 and can claim the Central Midlands Supreme League title to their name – surely a higher honour than any Premier League title? And what about a word on the visitors?  Friar Lane and Epworth were another club formed through a merger back in 2004 and play in the Midland Football Alliance.  Their 55 mile trip up from Aylestone would have also been full of hopes and promises, aiming to match their best ever achievement of a place in the 2nd qualifying round of the competition. Railway based gags had been Twittered around all week before we arrived at the ground with most of the UK under a heavy rain cloud.  But him upstairs must have known this was a special day for these two clubs as the sun shone from the moment we pulled up in the car park to the time when we left some two hours later. Lincoln Moorlands Railway FC 3 Friar Lane and Epworth 1 – Moorlands Sports and Social Club – Saturday 14th August 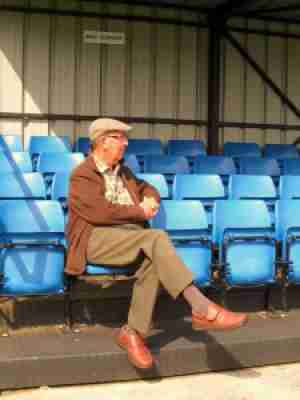 Any team that plays in claret and blue gets my vote and so it was an easy decision to “follow” Lincoln.  The ground looked fantastic in the sunshine – a mixture of the old and the new – and that applied to the facilities and the fans.  On one side a very old green stand with a few rows of seating sat mysteriously 3 or 4 metres from the side of the pitch, whilst on the other side a new stand was divided into Away support and Home support and directors – a blatant attempt to alienate the away team if ever I saw one. Friar Lane need not have worried as their one fan never gave up his seat or the display of choreographed support all afternoon. You could see the Friar Lane tactics from the first minute.  Hit the ball long and then hope when the ball came back, the keeper who was the size of a mini-bus (not quite in the Neil Shipperley or Darren Caskey “Size of a bus” category) would simply block the goal. 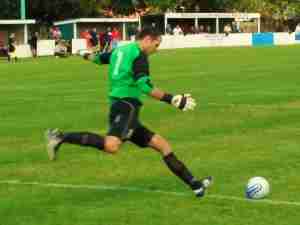 It worked for the first half an hour before he managed to get in the way of his own defenders from a corner and Lincoln’s Josh Cotton (no relation to Dot so we understand) scored the opening goal. Taking a child to football means you have to be prepared for them to pick up bad langauge. Lolly has been coming to games for the past seven years and knows them all but yesterday she questioned the word that seemed to be uttered every few minutes by the players.  When I say questioned she simply gave me a quizzical look.  This means I have to give a “Daddy translation”.  The word she had constantly heard was “Fook”.   I explained it was a northern variation on another word, and just to confirm understanding she said, so if I said “book instead of buck I would get it”. Yep – she is learning fast. We had a wander as you should always do at non-league grounds, having a chat with a couple of the locals, who seemed very proud of their modest club.  Lolly devised a new game which we will be taking to Waddington’s this week – Ladybird Grand Prix, where ladybirds race round a track made of sticks.  The key to a good race is to pick a female ladybird and numerous males as the former makes a run for it, and the latter simply chase her like some insect Benny Hill sketch.  Surely one of them could remember they had wings? 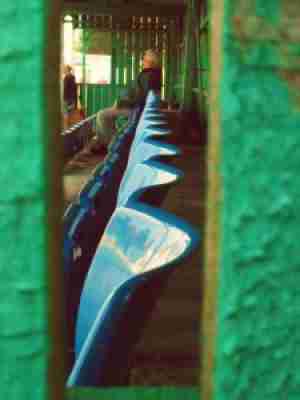 Anyway I digress.  Lincoln scored a second just before half time as friar Lane seemed to struggle to deal with set pieces and despite some half hearted shouts for offside, they trudged off into the newest building in the ground for their cup of tea. Both teams came out fired up for the second half.  A Lincoln goal would kill the game, but likewise a Friar Lane reply would make it very interesting. Apart from the sole Tifosi in the away section and a couple of blokes with Friar Lane and Epworth ties on there wasn’t many people backing the away team, but it was good to see that they had brought a long a mascot and decked him out in a Chelsea kit to support them and perhaps motivate them to think of Wembley. 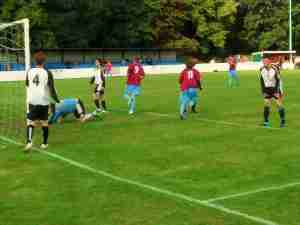 But it was the home team who scored a third with fifteen minutes to go after a break down the right hand side was neatly turned in by Lincoln’s Peter Crouch-a-like Ben Good (in terms of height and not the fact he was jetting off to spend£10,000 a night on Spanish Hookers – allegedly).  Game over surely?  Friar Lane didn’t give up and got a consolation goal with ten minutes to go when a cross from the left was hammered into the net by the  Friar Lane right sided midfielder Lyndon Seal. A very interesting last ten minutes then ensued with Lincoln deciding attack was the best for of defence and could have had a penalty when Sean Cann seemed to be felled by Elliott Shilliam in the Friar Lane goal.  The referee took one look at his rather portly linesman who was yards behind play and gave a goal kick and issued a yellow card for diving.  Quite why Shilliam then started berating the official for his “lack of fitness” in keeping up with play is beyond me considering the goalkeeper was so voluptuous himself. 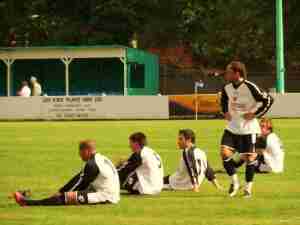 Full time and 3-1 to the home side and as the draw had already been made for the Preliminary Round they knew they would be heading to Glapwell of the Northern Premier League Division One South.  For Friar Lane and Epworth the heartache of knowing that a trip to Wembley would have to wait another season was all to clear for the crowd of 61 to see.  Still there is always next year. More pictures from a great afternoon out can be found on our Flickr stream here.
Share
Tweet
Share
Pins
Share
Like

Liverpool manager Jurgen Klopp has revealed that even football giants such as Barcelona and Real Madrid would struggle to win the Premier League. Klopp, who won the Bundesliga title in t...