Share
Tweet
Share
Pins
Share
Like
About the Dripping Pan – Capacity 3,000 (600 Seats) Thanks to Lewes FC for providing the following information on the ground: Lewes’ uniquely named ground ‘The Dripping Pan’, had previously been used by Lewes Priory Cricket Club which continues to play in the fields behind the ground, though the arena itself had been used by the people of Lewes as a centre of recreation as far back as records exist.  The original purpose of the ground is unclear, although local legend suggests that it was part of a salt making industry run by monks from the adjacent Cluniac Priory. The spoil from the excavation forms the mount behind the ground and both appear in the very earliest maps of Lewes from 1745. The ground may merely be the excavation pit for the mount itself, which has been suggested as the original ‘temporary’ motte and bailey fortress constructed by William the Conqueror’s close ally, William de Warenne, before he developed Lewes Castle on higher ground. An archaeological survey during construction of the new terrace failed to reveal any further insights into either the purpose or the age of the banks. In recent years, the grass banks which used to provide a natural amphitheatre have been replaced by concrete as the club looked to secure ground grading standards. In 2003 the Philcox Stand was opened behind the west goal and three years later, the 500 seat Rookery Stand replaced the old wooden South Stand which ran virtually the length of the pitch on top of the grass bank.  Last season the Terry Parris open terrace was built at the Ham Lane end, despite the protests of some local residents who opposed the destruction of a section of historic flint wall to make way for emergency access and a turnstile A “B” grading was secured in April 2008 and work continues on the rest of the ground to ensure it gets the required “A” grade certificate by April 2009.

How to get to the Dripping Pan The ground is located very close to the station – in fact I do not think I have visited a ground that is closer. If train is your arrival mechanism come out of the station, turn left and after 50 yards turn left at the roundabout and the ground is straight ahead of you. If you are driving and coming via the A27 from Brighton then take the first Lewes turn off. When you reach the crossroads where Lewes prison is, turn right and follow road down hill. When you reach small roundabout turn left into Southover High Street and follow until you see the ground straight ahead. There is a small pay and display at the stadium, and one the other side of the station. 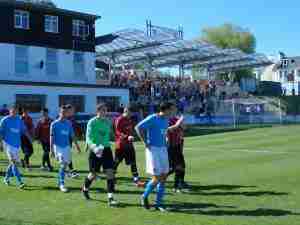 How to get a ticket for the Dripping Pan Crowds are disappointingly low at the stadium and there is no need to book tickets in advance for virtually every game. If you are here to see the local derby with Eastbourne Borough then it would be advisable to purchase in advance by calling the club on 01273 472100. Tickets are £12 for Adults and £8 for Children and this allows you to either stand or sit in the main stand. Our Last Visit – April 2010 v Dorchester Town 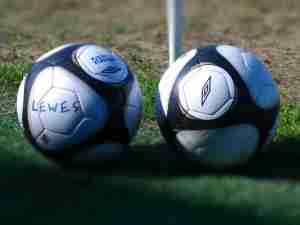 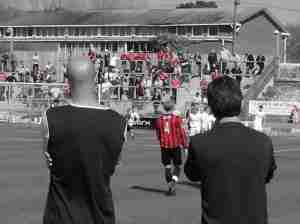 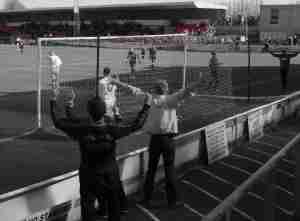 Two became three in 53rd minute when Gradwell scored from close range and five minutes later Breach’s towering header from a corner made it four.  The Lewes Lunatic Fringe went understandably wild at this point as news also filtered through that Chelmsford had taken the lead against Worcester. A final solo effort from Sigere recorded Lewes’s biggest score since a 5-0 win at Bognor Regis in August 2008.  All of this meant that a win against Bath City on Tuesday would keep Lewes in the Blue Square South for another season.  A draw and it may come down to goal difference, but a defeat would mean a few squeaky bottoms next week as Lewes headed off to the sleepy suburbs of Hampton for the final game and an end of season Beach Party.  Let’s just hope that it’s not just the tide that ends up going out. More photos from the game can be found here. Lewes 1 Hampton & Richmond Borough 0 – 7th November 2009 Bonfire night in East Sussex is not the same as any other place in the world. Lewes, one of the biggest town’s in Sussex is famous for a number of things. It was the site for England’s biggest avalanche when in 1836 snow from the white chalk cliffs rolled down the hill and killed 8 people. It also suffered an earthquake in 1864 measuring 3.1 on the Richter scale. It is the home of Harvey’s beer, the staple diet of any local and my favourite Friday lunchtime tipple at the Market Porter. And finally, for its bonfire celebrations. Their celebrations are not like anything else seen in the country and it is full of history (see here for more details) is far to complex for my little brain to get around. 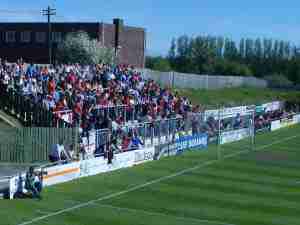 But I was not here for the fireworks fun. I was taking part in an exchange trip – similar to one you used to do in 4th year French apart from I knew I wasn’t getting some thieving little chap who wanted to steal my porn or shag my goldfish. This exchange was a football exchange par excellence…You see Mr Last (EFW fame) had agreed to sponsor the matchball for the Lewes game versus Hampton & Richmond and invited myself and Cynical Dave along for the ride. And in return I was taking Mr Last to his first Premier League game for a decade the following day for West Ham’s game with Everton. Lewes and West Ham had had similar seasons, struggling to fulfil their potential and spending too much time in the relegation zone of their respective leagues. Was this to be the weekend when it all changed? Well at this point I will hand you over to Danny who takes up the story of the weekend…..
Share
Tweet
Share
Pins
Share
Like

About the Gallagher Stadium After an absence of 24 years, Maidstone United finally returned home in July 2012 to the brand new 2,226 capacity Gallagher Stadium.  It is a fantastic new bu...