Ground Name: A-Line Arena (but still known to many fans as Rockingham Road) Capacity: 6,264 (Seated 1,747) Address: Kettering, Northants, NN16 9AW Main Telephone No: 01536 483028 Fax No: 01536 412273 Team Nickname: Poppies Pitch Size: 110 x 70 yards Year Ground Opened: 1897 Home Kit Colours: Red & Black Official Web Site: www.ketteringtownfc.com About the A-Line Arena A proper football ground whose traditional looking floodlights can be seen for miles around. A fairly open ground that has open terracing at either end. Both are small terraces, however the home terrace the Cowper Street End is larger than the Rockingham Road End Terrace, which is allocated to away supporters. A number of houses can be seen behind the home end (some of which get a free view of the game), whilst the away end has a number of trees situated behind it. On one side is the large Main Stand. It is a large cantilever stand that is covered and all seated. This stand extends for just over half the pitch in length. Unusually, rather than the stand straddling the half way line, it is located towards the Rockingham Road End of the ground. To the other side of the stand is the Club House and in the corner with the Cowper Street End, there are the two storey club offices that overlook the ground. Opposite the Main Stand is the partly covered (to the rear) Britannia Road Terrace. Again this is a small terrace, that has a small TV gantry perched on the front of its roof and a fair number of supporting pillars. The ground has some interesting looking floodlights, that at one time must have been arranged as the letter ‘K” – again another first in Britain. How to get to the A-Line Arena If you are driving to Rockingham Road then the easiest way to get there is to leave the A14 at Junction 7 and take the A43 signposted Corby/Kettering. At the first roundabout turn right onto the A6003 towards Kettering and the ground is located down this road on the left. There is limited parking at the ground, but plenty of street parking is to be found. If you are coming by train then Kettering is served on a regular basis on trains from St Pancreas and Nottingham via Leicester. To get to the ground from the station you can either get a taxi which will be around £5 or you can walk. Carry on up the hill from the station and simply keep following this road past Morrison’s and the Co-Op. It should take you no more than 20 minutes. How to get a ticket for the A-Line Arena Apart from the odd FA Cup game such as the tie against Fulham this season, sell outs are unheard of. Whilst tickets can be purchased in advance, there is no issue in turning up on the day and paying on the door. For most games a ticket for the main stand is £15 (£16 for “local” games versus Rushden, Cambridge, Stevenage and Oxford) and £4 for concessions, where as a terrace place is £13 and £4 respectively.

About Our Last Trip – Kettering Town 0 Eastbourne Borough 1 – 14th March 2009 A little birdy tells me that sometime in the next month Manchester United will announce the world most lucrative shirt sponsorship deal in the history of football. Since AIG announced they would not be renewing their deal in January 2009, the list of companies wanting to be associated with the world’s biggest football club has been a mystery that Scooby Doo would have been hard pushed to solve. Some say T-Mobile had thrown in their hat, others say that Bwin are very keen on adding the Red Devils into their band of superbrands with AC Milan and Real Madrid. This season alone the six major leagues in Europe earnt over £350m in shirt sponsorship yet these clubs would be nowhere if it wasn’t for a small club in the middle of Northamptonshire. The superstars of modern football who earn some of their megabucks from these huge deals should every year send a magnum of champagne to Kettering Town, for it was them under the guidance of Derek Dougan who brokered the first ever shirt sponsorship deal back in 1976. During the seventies football revenue came solely from the central pool, with a little bit of perimeter boards. Dougan was a forward thinker and saw an opportunity to bring some more money in for the club. He did a deal with local company Kettering Tyres, and for their Southern League game against Bath City the team ran onto the pitch sporting the words “Kettering Tyres” (See left) on their chests. The stuffy old FA went mad and ordered the club to remove the blatent advertising. Dougan simply removed the world Tyres but left a large “T”, claiming it stood for Town. The FA still insisted this was illegal and threatened the club with a £1,000 fine and they relented. However, just over a year later the Football Association changed the rules and opened the door to shirt sponsorship as we know it today. 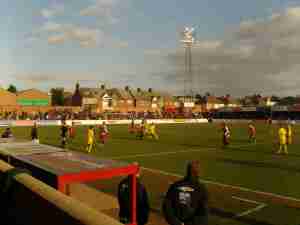 The club’s formative years were spent in the leagues around the Midlands and Southern Leagues, and they actually came lose to being elected into the Football League in 1974 under the guidance of Ron Atkinson. Due to their high profile in the regional leagues they were asked to become a founder member of the Alliance Premier League in 1979, and were runners up at this level 1981. After a couple of brief spells back in the Southern Leagues they were promoted in 2002 back to the Conference, albeit into the newly formed Northern division. In 2005 the club were taken over by Imraan Ladak who promptly appointed a frail Paul Gascoigne as manager. The England legend lasted just over a month before he left in uncertain circumstances with the club. Under a series of new managers the club began to climb the table and 12 months after losing a play off to Farsley Celtic they were promoted at the end of 2008 as Conference North champions. This season under Mark Cooper the club have made huge steps forward, benefiting from some of the changes made whilst in the lower divisions (such as going full time). They have spent most of the season in the top ten although they have constantly had games in hand on their rivals. In fact coming into this game they were in 9th place in the league but had six games in hand on second place Cambridge United and trailing them by just thirteen points. Whilst many pundits would always say it is better to have points in the bag, the games in hand are being used as a rallying call by the club to try and move up the league and to get into the play offs. Two consecutive promotions at this level is almost unheard of, but as they have proved in the past, Kettering Town are no stranger to breaking with tradition. As a final footnote to the rise of the club and coming in a full circle, they signed their most recent sponsorship deal in 2007 with Palestine Aid, the aid organisation that tries to raise awareness of the humanitarian issues the Palestinians face. It was rumoured that the club’s adoption of this charity cost them TV revenue when ITV opted to show the FA Cup 4th round game between Hartlepool United and West Ham instead of the Kettering Town versus Fulham one for fear of offending some viewers. 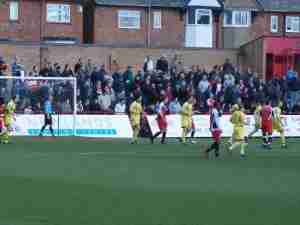 The visitors, Eastbourne Borough had also moved up a division this season and sat very comfortably in 13th place, safe from relegation but too far away from a play off spot. I had seen them a few weeks ago (see I Do like to be beside the seaside post) and was impressed with the way they played. This was going to be a real test for them as their away form had been excellent of late, especially as they had recently taken West Ham youngster Jack Jeffrey on loan for the rest of the season. Lolly and I headed off straight after swimming lessons (her not me I should add) and parked up outside the ground in a less more than 90 minutes later. One of the easier stadiums to find, just off the A43 and by getting there an hour before kick off we had managed to bag one of the few free on street parking spaces next to the ground. As we had skipped lunch we headed into the Wimpey, next to the main stand, to relive some dark days of my young by consuming a Big Bender – come on you all remember them! Back into the 21st century we headed into the ground, taking a seat in the strange Main Stand that only ran for two thirds of the length of the ground. The rest of the stadium was standard non-league fayre with two low terraces and a cover “cowshed” terrace on the opposite side to us which was where the more vocal Kettering fans were located. Bolted onto the top of this stand was a small open box, branded McDonalds making it in our view the smallest branch in the world. Two names stood out on the Kettering teamsheet. Firstly, the man with the huge throw ins (see Game of the Day for more details), Exodus Geohaghon was back in the centre of defence meaning an aerial bombardment was on the cards for the Eastbourne defenders, and secondly a certain Jason Lee was on the subs bench. Surely not THE Jason Lee, the one man joke that propelled Baddiel and Skinner through a whole series of Fantasy Football in the mid 1990’s due to his comical hair – yep one and the same. He certainly looked quite mean and in remarkably good shape. What a perfect foil he would be for these throw ins if Kettering were training at any point…… 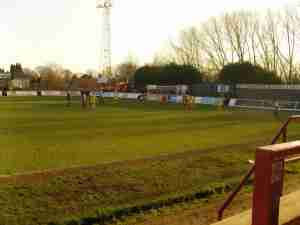 Normally I talk at length about the game, picking up on the talking points of the game and analysing them in depth. However, I can quite honestly say that during the first seventy five minutes of the game there was nothing to mention. It wasn’t that it was dull, it was simply that the strong wind made any football very difficult. In the first half there was no one single chance on goal. The 100 or so Eastbourne fans took refuge in the snack bar at the back of the terrace, taking solace in their chips with mushy peas. The only real taking point was the number of balls that were sailing over the perimeter walls of the ground, causing the rather large steward a few trips to shed a calorie or two. Despite having the throw on weapon, Kettering kept it under wraps throughout the whole game. The one turning point came in the 77th minute when Eastbourne threw on subsitute Nathan Crabb, brother of Matt Crabb who had been the most industrious player on show. The two brothers cannot weigh more than twenty stone between them and it was amazing that they managed to stand with the strong wind blowing in their faces. However it was Matt Crabb’s surging run that unlocked the defence and he threaded the bal through to his brother, who after getting a lucky deflection off the defender, put the ball into the net for the only goal of the game. The game ended much as it had taken place with more huffing and puffing. Kettering’s promotion push had come off the rails temporarily. This was their fourth home game in eleven games, and with two more in the next sisx days it is understandable that tiredness was starting to affect the team. On another day with more clement weather it may have been a different story, but for today it would have to be a case of the Big Bender – best forgotten.