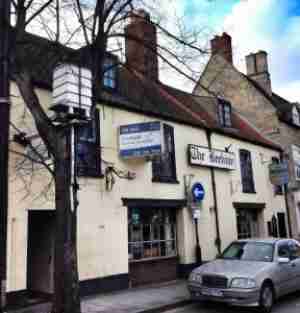 I could have been watching thousands of pissed-up German fans singing, chanting and waving stuff around in unison.  I could have been watching the Dresden fans trying to take on the finest German riot police.  I could have been wolfing down bockwurst, brautwurst, bierwurst and the odd knackwurst.  I could have been indulging in Hefeweizen, Helles and a cheeky Dunkle.  But who really wants that when, and I quote the oracle that is Wikipedia about Grantham:- “Grantham has the country’s only ‘living’ public house sign: a beehive of South African bees situated outside since 1830” Grantham is also notable for having the first female police officers in the United Kingdom, notably Edith Smith in 1914, and producing the first running diesel engine in 1892, and the UK’s first tractor in 1896.  Take that the EFW turncoats! I can see you seething with jealously from here. But I am focusing on the positives.  I’m in the English sunshine, with Northern Steve enjoying a game at a new ground.  Yes, it may be an athletics stadium, and the crowd may be a bit on the thin side but I am doing what I love most, well almost.  And if I really am bitter and twisted about not being in Germany I can have a wander down Sankt Augustin Way, named after Grantham’s twin town in Germany and feel marginally better. When I looked into the history of The Gingerbreads they seemed to major on one event.  Yes they once finished 2nd in the Southern League and could have applied to promotion to the Football League, back in the day when it was all done via a wink and a nod, and yes two years ago they won the Northern Premier League South Division but ask anyone about what they may know about Grantham Town and they will almost probably maybe say “Isn’t that where Martin O’Neill started his managerial career?”. Yes, indeed. 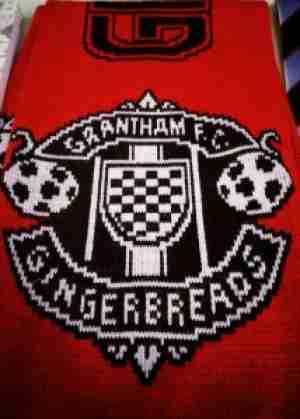 But let’s look back at that golden period at the start of the 1970’s.  Successive promotions through the Midland and Southern League North saw them take their place in the Southern Premier Division in 1973.  An impressive FA Cup run that saw them beat Kettering Town, Hillingdon Borough and Rochdale saw the Gingerbread’s host Middlesborough, then as now in the second tier of English football in the 3rd Round of the cup.  A crowd of over 6,500 in their old London Road stadium saw them bravely go down 2-0 but the gate receipts allowed them to kick on in the Southern League and they finished runners-up to Dartford but decided not to apply for a place in the football league. O’Neill joined the club in 1987 after retiring from playing in 1984 and managed them for two Southern League (Midland) seasons before heading to Shepshed Charterhouse.  Few who saw his team or management style would have ever anticipated that he would go on to manage at the highest level. But that was then, and this is now. Unlikely to be relegated, unable to be promoted or make the play-offs, there is a danger that their season would fizzle out in the April gloom. It’s not often that Northern Steve and I get the opportunity to have an afternoon out without our respective wonderful ladies so I am sure it would be the best game ever…and at no point would my mind be wandering eastwards to the land of beer and brautwurst. Honest. Grantham Town 2 Frickley Athletic 1 – South Kesteven Sports Stadium – Saturday 5th April 2014 For the best part of the first hour of this game I didn’t actually make any notes.  It wasn’t the best of halves, with both teams struggling with a bobbly pitch and the difficulties that come with playing in a “multi-sport arena”.  Frickley looked the brighter side but neither set of fans had anything to shout about.  Things livened up at half time, with the very smart bar rammed full of away fans singing songs about their love of Grantham’s favourite daughter, Margaret Thatcher and accompanying every Sky Sports half time score with a oooh or an ahhhh.  In fact I was quite happy to stay in the bar drinking a couple of pints of Hophead and watching the Grand National rather than emerging for the second half.  We looked longingly at the score at Chorley versus Droylsden and wished we were there, with the home side already seven (SEVEN!) goals to the good. 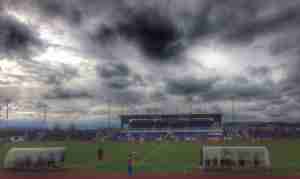 But sense prevailed eventually and we emerged for the final twenty minutes.  Whilst Frickley were dominating play, they needed a win.  Other scores were putting relegation pressure back on the The Blues (playing in yellow – after all the clash of colours with a team in red was just too much) but with eight minutes to go a ball was played over the top and Hinsley ran onto the ball and smashed it home. The good mood of the away fans lasted just four minutes.  A corner to the far post was driven back across the goal and Lister stuck out a foot and diverted it into the net.  If that was harsh for Frickley then injury time brought heartbreak as a free-kick from the left hand touchline was met at the far post where Michael Towey headed home to give the spoils to the home side. It hadn’t quite been up there with the atmosphere at Energie Cottbus versus Dynamo Dresden, nor had my pint of Hophead been served by a buxom young lady in a dirndl. My sad face was plain for Northern Steve to see.  “Cheer up lad…we have a night out in Lincoln to look forward to.  I mean who in their right mind would rather be in Leipzig?”…..
Share
Tweet
Share
Pins
Share
Like

The Premier League has seen plenty of Italian managers before but none like the winner of the award Globe Soccer Best Coach for 2013, Antonio Conte. With enviable tactical knowledge and i...