Share
Tweet
Share
Pins
Share
Like
About the Erith Stadium The stadium is essentially an athletics track owned by the local council and part of a leisure complex that includes a gym and a swimming pool.  Spectators only have access to one part of the ground, a small bank of seats with a cover across the middle of them.  You can also view the game from the bar, albeit losing one touchline due to the stand roof or on the balcony outside. How to get to the Erith Stadium From the M25 you need to take the exit immediately before/after the toll booths depending on what direction you are coming from (before for Kent, after for Essex).  Take the A206 University way westbound and simply stay in this road, going over a series of roundabouts until you reach the roundabout with the A2000.  Take the 4th exit s/p Erith and carry straight on over a roundabout until you reach a set of traffic lights with McDonalds on your right.  Carry straight on here and at next roundabout turn left into Bexley Road. Take first left into Victoria Road and then left at the end into Avenue Road.  The entrance to the stadium is on your right hand side.  There is free parking in the sports centre. If you are coming from the A2 then exit at the Black Prince interchange and head northwards up the hill s/p Bexleyheath.  Carry straight on at the traffic lights for Bexleyheath and continue into Erith Road.  Pass the bus garage on your right and continue until you reach Northumberland Heath.  Take the next right after Nat West into Avenue Road.  Continue until the end and turn right into the stadium car park. The nearest station is Erith which is a 10 minute walk away.  Come out of station and turn right along dual carriage way.  Cross road at roundabout and then as directions from M25 into Bexley Road. Admission to the Erith Stadium £6 for Adults, under 16’s are free.  A very good programme is also available for £1 at the turnstile. Our last visit – April 2011 Monday nights are my nights in the Fuller household.  Tuesday is when CMF goes out and ends up coming home with (male) strippers thongs and empty bottles of Lambrini in her pocket.  Wednesday is dancing/football training for the Little Fullers and Thursday is entertaining my parents.  So Monday, as long as I am not in the land of the Danes means I can do what I want…within reason.  There are actually very few games a) in London or South East and b) in the Non Leagues played on a Monday night so I am normally limited as to being able to sneak away for a game. Seven days ago I was experiencing the amazing atmosphere at the Råsunda in Stockholm for the Djurgården v AIK derby….and tonight I was heading to…..Erith.

Erith has got bad press.  Well, actually very little press at all.  It sits just to the north and west of Dartford, close to the Thames Estuary and surrounded by commuter suburbs and DIY warehouses.  It is famous for, well being simply there.  No, I tell I lie – it does have the longest pier on the River Thames, and was once the home of Edward Butler, the man who came up with the Butler Petrol Cycle, now established as the world’s first ever petrol driven vehicle. In terms of football the town actually can lay claim to two teams.  Erith & Belvedere actually played in the town until 1997 when fire and then a B & Q gutted their ground at Park View so now they play a few miles away at Welling United’s Park View.  And then there is Erith Town, The Dockers.  Both sides play in the Kent Premier League, and the derby is up there with Arsenal v Spurs, Millwall v West Ham and Waltham Abbey v Waltham Forest.  Sixty five people saw the first fixture between the two clubs earlier in the season and their meeting on the final day of the season will undoubtably set the bragging rights for the summer after Town’s 3-0 win in September. Erith Town were formed in 1959 as a Sunday League side, converting to the Spartan League in 1991.  This is actually the highest level to the club have played at and have ambitions to go further.  Unfortunately their current ground may be the restricting factor.  They currently play at the Erith Stadium, which is basic but functional.  I am sure they will have to jump through significant hoops at prohibitive costs to just be told they could move up to the Ryman League (and then in the case of VCD be told it was all in vain anyway).  The ground has actually hosted an International match when in February 2006 England women’s under 21 team took on their US counterparts.

The visitors were Corinthian.  Now I bet 99% of football fans would think I was referring to Corinthian Casuals, or simply have no idea where the club are based.  But I do.  And I know because I grew up sneaking into the ground and the surrounding area.  The club are based on a converted farm, called Gay Dawn in a tiny little village called Fawkham in Kent.  Now two things you should know about Fawkham.  Firstly it is about half a mile from Brands Hatch, and secondly one of Europe’s best known nudist colonies is based here.  Eureka was the source of teenage wonder.  We used to sneak up there and stand on our bikes to view the comings and goings of the naked people frolicking around.  I still find it amusing that on their website it says “All the local taxi drivers know where Eureka is”.  I bet they do, as too do all local teenage boys. Corinthian once had ambitions to be the revolutionaries of the non leagues.  Corinthian FC was founded in 1972 by Ron Billings to provide football in a safe environment, whilst teaching the players the principles that he believed to be important in sport.  The motto was simply “pro omnium beneficio”- for the benefit of all, but on the pitch the principles were simple; “Hard, but fair”. Losing wasn’t considered before the game, but if the result went against them then the team were taught to take it graciously. For the first ten years of the club’s existence they welcomed such teams as Tottenham Hotspur, Charlton Athletic and Norwich City amongst other league teams as well as county and district representative sides as opposition. During the 1980s with the arrival of an experienced football manager, Tony Sitford, they progressed from youth football into competitive men’s football playing in the Southern League, at the time a level 7 league in the English football league system. This level of football by a totally amateur club made them unique, but caused problems in the long run in attracting new players. In their first season in the league they finished a creditable fifth, but subsequent seasons saw them slide down the table until they finished bottom and were relegated to the Kent League in 1991.  But today they are back and hopes are that they can climb the leagues again. As luck would have it the sunshine of the previous few days gave way to rain just as I arrived in Erith.  All very nice for a game in the open air with little in the way of cover.  But who really minds.  After all in four weeks I will be craving a game or two so it was time to shut up and enjoy the delights of the Safety Net Kent Premier League. Erith Town 3 Corinthian 3 – Erith Stadium – Monday 11th April 2011 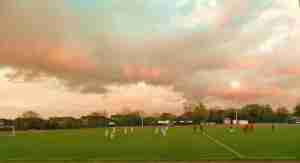 Sometimes good games just come along and bite you on the arse when you least expect them to and this was one of those.  Six goals including a goal in injury time that was goalkeeper assisted helped keep my wandering eyes from marvellous cloud formations.  You see I can spend hours watching clouds, not through any weird fortune-telling reason, and the first half of this game had plenty of Nimbo Cumulous action going on in the sky whilst there was plenty of goalmouth action on the ground. A couple of observations.  Firstly, despite admission being a bargain £6 (and the programme a £1 read was one of the best in terms of facts and stats I have seen at any level this season) you could actually just stand outside the ground and watch the whole game through the wire fence.  Secondly, the linesman (either Mr Packman or Mr Head) had the brightest coloured hair I have ever seen. And finally I knew 12% of the crowd.   That would be quite a feat at West Ham (average 35,000 attendance, 12% = 4,200), or even Lewes (average 700, 12% = 84) but in a crowd of 45 people, knowing five people there was not that impressive. 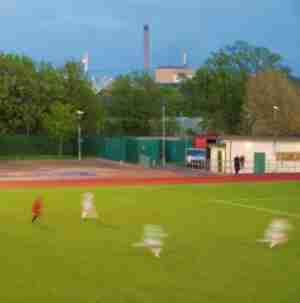 The game itself was open, competitive and actually quite a high standard. I watched the first half from the elevated vantage point above the stand, also known as the bar.  Corinthian took an early lead when Lee Barnett curled the ball into the top corner from outside the penalty area, a goal worthy of a greater venue.  Their lead lasted long enough for the colour of the ball to change from orange, to white and back to orange again before Lee Burgess calmly scored from the penalty spot. The whole crowd descended on the bar at half time and Vinnycame up to share my vantage point for the second half. We only seem to bump into each other on strange Monday night games in athletics stadiums.  Corinthian started the second half strongly and scored two swift goals thanks to a double from George Benner, the second a sublime move involving more flicks than a Ronaldo Coca-Cola Soccer Skills demonstration. With then minutes to go you expected Corinthian to shut the game out but they let The Dockers back in when Alex Tisse poked home unmarked.  Then with injury time almost up Erith had a final corner.  Up came keeper Tim Roberts and caused enough of a distraction for Joe Foster to head home and save the game and the day for the home team. £6 for 6 goals is a good return on investment in anyones book.  I called CMF and told her to crack open the Strongbow and  “start up the Quattro”, ready for a late night session with Gene Hunt.  Monday’s are the new Fridays in my book
Share
Tweet
Share
Pins
Share
Like