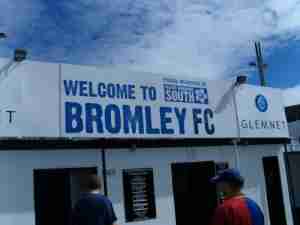 About The Courage Stadium Everyone knows the ground as Hayes Lane, despite it carrying the name of the brewers and it has been home to the club since 1938 when they moved from just down the road. It is a great non-league venue with a small main stand (with a fantastic bar at the top including a viewing area of the pitch) that sits around 4 foot above the playing surface. The stand was rebuilt in 1993 after fire destroyed the old one and it was named the John Fiorini Stand after xxxx. Opposite this is an excellent terrace that offers great views of the game, and behind each goal there are covered stands – one at the Norman Park end has benches which offer surprisingly good views. There is also a second bar next to the main stand where you can, shock horror, buy beer and drink it whilst watching the game! How to get to The Courage Stadium The ground is a fifteen minute walk from Bromley South station. Simply head right out of the station, cross the road and walk down Westmoreland Road, taking the first left into Hayes Road and following this all the way down to Hayes Lane where the ground is opposite you. Alternatively a number of buses run past the ground including the 314 from Eltham, 146 from Bromley Town centre and 119 from Croydon. Getting a ticket for the Courage Stadium Simple £10 for Adults and £4 for Concessions, paying on the door. The club do deals for families as well, offering free entrance for more than one child. Our last visit – September 2010 Life must have been swimmingly for South Park FC up until Trey Parker and Matt Stone shared a beer in a bar in Colorado in the mid 1990′ and came up with the characters Stan, Kyle, Eric and Kenny who became the worldwide cult TV series South Park.  Overnight the club and its fans became the butt of jokes about chocolate salty balls and Mr Hankey.  The Barmy Army, as the club are also known as could do nothing but to ride out the storm in Crawley & District Leagues. However, things started to change on the pitch.  The club were promoted in 2006 to the Combined Counties Football League, step six in the pyramid and thus allowing them to enter the national competitions for the first time.  Last season they made their debut in the FA Vase, losing in the second round to Shoreham.  This year it was the turn of the FA Cup. In early August they played Greenwich Borough in Bromley, beating them 2-1.  In round two they thrashed Horsham YMCA of the Isthmian League 4-0 setting up their biggest game in their history against Isthmian League Premier Division team Cray Wanderers. 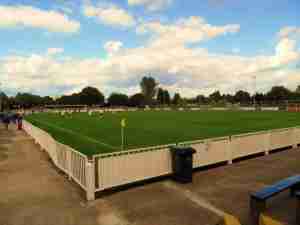 For me this would be a second FA Cup game in twenty four hours – a rare privilege in the Fuller household, but as I had been on childcare duty all day yesterday, I had earnt Husband of the year award (other candidates were John Terry, Wayne Rooney and Tiger Woods) and was allowed to hop on the bus for this one.  Let me rephrase that – hop on the bus.  Yes, we were going to do our bit for the environment by sitting on a dirty old bus as it idled in traffic.  Route 314 runs literally from TBIR towers to Hayes Lane, home of Bromley FC and tenants Cray Wanderers.  And to make the trip even better we were going to meet up with FA Cup experts The Real FA Cup team, who had taken the healthy option with a cycle down from their vast estate in South London.  If this game would be anything like South Park’s victory against Greenwich Borough in the Extra Preliminary Round then we would be in for a treat, especially if there was a repeat of the “drinking alcohol from plastic glasses”. 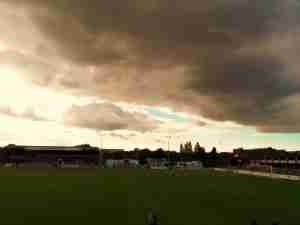 Now Cray Wanderers – that is a story! Formed in 1860 by workers who were building the London to Kent coast railway in the St Mary’s Cray/Orpington area, and thus making them one of the oldest football clubs in the world.  But answer me this?  If they were the second oldest club (behind Sheffield FC) in England, who did they play?  And why form a club if you cannot play against anyone?  Not that it matters today – the club are still going strong 150 years later, holding their own in the Rymans Premier League which is the highest level they have played at.  As a mark of respect to their history the club are wearing a very fetching Brown and Amber kit for the season. Cray Wanderers 1 South Park 0 – Hayes Lane Stadium – Sunday 12th September 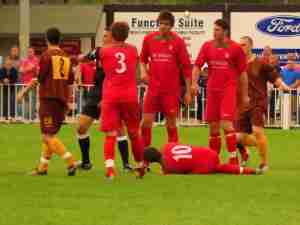 For the second time in 24 hours the game was decided by a late goal and a contraversial sending off decision.  However, this time it was the home team who won the game with a man less after Chris Saunders was sent off on 15 minutes for a challenge that could at best be described as competitive.  A more experienced referee would have issued a yellow, but swayed by a vocal away following saw a red card being brandished by referee Pickard. South Park came to frustrate and even with a man advantage they rarely ventured forward until the last fifteen minutes.  It was left to Cray to try and break the deadlock, but more often than not their final ball was easily dealt with by an organised South Park defence. 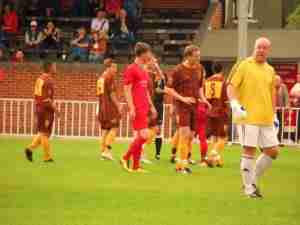 Star of the show had to be South Park keeper.  For those of you who haven’t seen ex-West Ham hard man Julian Dicks (now manager of Grays Athletic) for awhile then here was his doppleganger.  Dicks himself once went in goal for West Ham, in the days before 3 million substitutes were allowed when Ludo Miklosko was sent off away at Everton.  Such was his performance on the night that he won the Sky Man of the Match award despite the Hammers 3-0 defeat. Time and time again he spread his ample frame to stop the ball with any part of his body as Cray were frustrated to say the least.  ITV Sport who were here to record this for their season long coverage would be making comparisons I am sure with Joe Hart and Ben Foster, although Gillingham fans may remember Jim Stannard better. The best chance of the half fell to Hamici who saw his header loop over the keeper, bounce of a post and straight back into his arms.  Charmed I am sure! 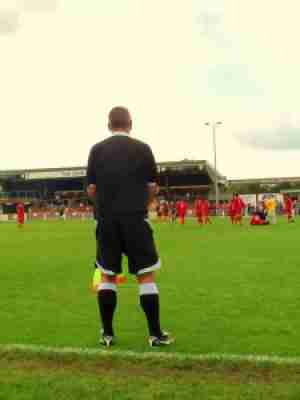 The second half started with a discussion between ourselves and our good chums at TheRealFACup on the state of English cricket, as we watched the game next door unfold.  The team batting first managed a huge 279 for 1 (and that one wicket fell with the score on 250) from just 38 overs.  To be truthful there was little in the way of action on the football pitch to keep our interest levels up and if Paddy or Fred (or even that lad Broke) would have come along, I would have put Lolly’s pocket money on a draw.  Cray Wanderers’ Sawyer had the best chance of the half when for once keeper Wastell was woefully out of position but he headed well over from just 6 yards.  As if to refocus their cause South Park should have taken the lead themselves as a smart move down the left saw the ball roll across the six yard line only for South Park’s Parker kicked thin air. As the game entered time added on the odds on a winner increased greater than Avram Grant lasting until Christmas at Upton Park.  South Park, unsurprisingly were playing for the draw, enjoying their biggest day out ever in the South London sunshine.  They had frustrated Cray Wanderers, rarely troubling them apart from the 10 minute blitz on the home team’s goal late on in the game. 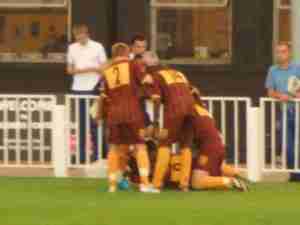 However, with the last attack of the game the ball fell to Laurent Hamici just inside the area and he was able to turn and slot the ball home, setting up a plum home tie in the next round with Ebbsfleet United.  Perhaps by then the cricket next door may have just reached 50! So the headline writers will have to put away their South Park encyclopedias for another year.  They came, they fought and they went home deservedly very proud of their cup run this year.  And for me, well a 314 home and a few days off before we turned our attention back to the Allsvenskan in Sweden where we would be seeing perhaps the Championship decider. For more photos from our day out in the sunshine click  here.

Arsenal are through to the FA Cup quarter-finals following a comfortable 2-0 win over non-league club Sutton United yesterday. The result hardly nullified the embarrassing defeat at the A...