Share
Tweet
Share
Pins
Share
Like
About Oaklands Park A more than adequate ground for County League standard with a small covered stand opposite a nice newish club house.  Two further terraces also give protection from the elements.  There is a bar in the clubhouse. How to get to Oaklands Park The ground is located just on the Chichester Ring Road, near the Northgate roundabout.  From the A27 follow the A285 into the city centre, When you get to the Northgate roundabout follow it around until you see signs for the Tennis Club and Pay and Display car park.  Drive through this and there is free parking at the ground. From the train station it is a fifteen minutes through the city centre, following first South Street and then North Street until you get to the Northgate Roundabout.  The ground is on the otherside of the roundabout. Admission to Oaklands Park Admission to Oaklands Park is £5 for Adults and £1 for Concessions. About our last visit – April 2013 I cannot read or say the words Bognor Regis with a small titter sneaking out of my mouth. You see I was a seventies child, raised on TV shows such as Dads Army, On the Buses and of course Are You Being Served? Even today I can think of no better way to relax in the evenings than a large glass of Chateauneuf du Pape and slipping on a DVD of the crazy antics of Grace Brothers. After all, who wouldn’t want to hear tales of Mrs. Slocombe’s pussy late at night? The TV show has been featured in the news briefly this week as the actor Frank Thornton, who played the role of Captain Peacock, had passed away, meaning that the whole of the original cast were no longer with us. 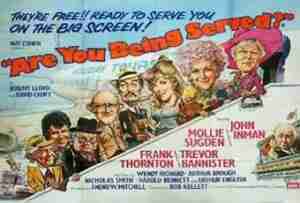 The series ran for years, including a film in 1977 supposedly set in Spain, and featuring Andrew Sachs as a clueless Spanish hotel employee – as if that sort of character would ever work! Anyway, back on topic, the reason I laugh is because of a line in the film where Mr.Grainger needs to use the toilet on the airplane and its suggested he does it over Bognor to gain revenge for a holiday ruined by the British weather when he was younger. Little things please little minds, as Katie Price would undoubtedly say. So Bank Holiday Monday and the second Sussex derby in 48 hours. Unfortunately Saturday’s defeat against Hastings United had seen a big black cloud descend on the Dripping Pan.  We needed a big boost, something akin to what the first meeting of the Rooks and the Rocks delivered at Christmas.  The game on Boxing Day at The Pan, played in God-awful conditions the like of which we haven’t seen for at least a week saw The Rooks take all 3 points. Since then, wins have been scarce but this was all about the bragging rights between East and West Sussex. The game in December had attracted a Ryman Premier League high of 883 fans, although few who were there will remember much more than the incessant rain and the bonkers away fans who stood on the open Jungle cheering their team on. Three months later and the weather has hardly changed. Snow had fallen virtually every day in March so the 1 April would be a perfect day for a visit to the seaside, and what better place that Bognor, a town that was awarded its “Regis” (by appointment to the King) in 1929 although many commentators believe his reaction to the suggestion by an aid was to say “Bugger Bognor”. 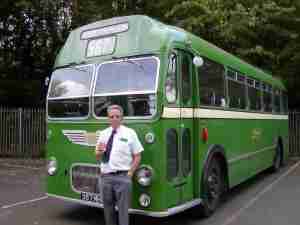 Taking the British 70’s Sitcom to another level, the Lewes fans would be making their way along the A27 on Clive’s, one of the club’s directors, old bus.  Not that Clive is a modern day Stan Butler (secretly I think he wants to be a Blakey), but what better way to travel to the seaside than on an old-fashion Charabang!  Bottles of Milk Stout were loaded on board with tongue sandwiches all round for the trip westwards.  Who wouldn’t want to travel in style?  Well, Danny Last and I for ones but that is because we had another agenda. Can I just say at this point that I think the Sussex League are a great bunch of chaps. They realise us football fans who love nothing more on our public holidays than a game or two, so they stipulate that all of their games kick off at 11am on Bank Holidays. If the pubs were open, I’d raise a glass to their good health….So before we headed along to the home of The Rocks, we had a small matter of a visit to The Lashmar, home of East Preston for the local derby against Worthing United. Whilst located some 275 miles south of Preston, Lancashire, it is still east by a few  degrees and those they are able to use the name East Preston. The club are certainly on the up and are pushing for promotion to the Ryman League off the back of a league and cup double last season, which wasn’t without some contraversey (Club Sec Kev pissed on my chips at this point by telling me they couldn’t go up due to ground grading issues).  In fact this game was seen as a grudge match as last season East Preston “nicked” the management team led by Dominic Di Paola from the visitors Worthing United.  This season with just a few games to go East Preston sat in third place in the Sussex County League One, just four points behind leaders Peacehaven but with two games in hand.  In David Pleat speak, the league was certain to go down to the wire. East Preston is no more than a village, with a population of just under 6,000 including a certain Desmond Lynam.  Of course Des would be at the game – he loves football and it was on his doorstep. Heck, I’m sure that Lashmar was even in his back garden.  Danny was so sure that Des would be there that he brought his photo of him and the Dishy One he took back in the day. 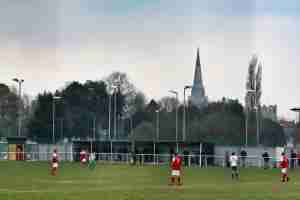 So 1st April…April Fools Day.  I was 10 miles outside of Littlehampton when Danny called me. “Game off Stu, Worthing can’t raise a team”.  Yeah right…April Fools Day and all that. But it appeared the joke was real.  Worthing United, bottom of the Sussex League, could not even muster 7 players.  So much for pre-planning.  We could of course just admitted defeat but there is no clause for that in the EFW/TBIR handbook.  So twenty minutes later we eventually found Chichester City’s Oaklands Way ground after first finding a sports centre, some train sidings (the floodlights fooled us),  a mobile phone mast and finally a pub (well, that was the Plan C anyway). It didn’t seem to be the biggest gig in town.  In fact the 34 people I counted watching included two dogs and a tennis player who kept popping in to retrieve his overhit balls.  Kenny Kegg, the artist formally known as Kenny Legg, would have been in his element.  The oldest linesman in the world who had a cup of tea on the side of the pitch, probably prepared by his wife who also made him wear his gloves; the oldest group of Chichester City ultras; two chair/table sets bolted down to the floor – the type you see in your local Wimpy. Chichester City 0 Arundel 0 – Oaklands Park – Monday 1st April 2013 Back in 2010 the then manager of Chichester CIty Mark Pulton was in the dugout for a cup match against Redhill.  Obviously unimpressed with what he was seeing, the Chairman called Pulton and fired him during the game.  If the chairman was watching today, he must have been tempted to press the button on a game where had to wait until the 92nd minute for any moment that is worthy of reporting in a game that was played in freezing cold conditions, on a very bobbly pitch, but two teams who would have probably agreed to a draw before the game and got an extra two hours in bed. But then, an Arundel player skipped around the keeper, was hauled down and the visitors had a penalty. 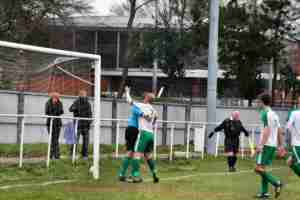 The penalty kick was entrusted to a player called “Chippy”…when he took the ball an Arundel fan next to me groaned.  It appears Chippy wasn’t known for his humours quips, his trade as a carpenter or his ability to play Liam Brady-esque cross field balls but rather his love of fried potato objects.  Chippy ran up, side-footed it and the keeper turned it around the post.  Full time whistle blown, onwards and upwards. I’d never been to Bognor and it looked relatively pleasant as we drove along the seafront.  Our destination was a Weatherspoons pub.  We were going to spend our Bank Holiday in a Weatherspoons at the English seaside.  How had my life come to this? Any depressive state was soon lifted as a pint of Ionis Coffee Porter and a foot-long hot dog was placed in front of me.  Life couldn’t get any better, well until 5pm that was for sure! 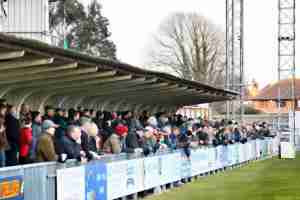 We made our way to Nywood Lane, home of the Rocks.  One of the best non league grounds you can ever ask to visit.  The club house is a cavernous affair fit to grace any ground and the Lewes fans who had come in their numbers were hoping that this wouldn’t be a weekend horribillis after the defeat to Hastings.  The fate of the Rooks was still in our hands with Wingate & Finchley below in the table, having played a game more.  Simple really, just make sure we match their results.  Our season had come down to spending 90 minutes looking at nonleaguelive.comrather than what was happening on the pitch.  That is not how the season should pan out.
Share
Tweet
Share
Pins
Share
Like

Former Arsenal striker Ian Wright has suggested that it would be better for Alexis Sanchez to leave Arsenal following the Gunners' failure to challenge for trophies, BBC reports. Wright,...