Share
Tweet
Share
Pins
Share
Like
The ground is named after their late benefactor, Lord Camrose.  It has a capacity of 4,000 although the record attendance is 5,085 for a game versus Wycombe Wanderers in the FA Cup 1st Round in November 1997.  The ground has just one seated area, the Main Stand (capacity 650), which is located on the south-east side of the pitch. The opposite side of the pitch has a covered terraced area, although the cover is set quite away back from the pitch.  At the north end of the ground is a covered terrace whilst the opposite end is open to the elements.  The club house is behind this stand and if you do decide to go in their at half time you need your ticket to re-enter the ground. How to get to the Camrose Ground Exit at Junction 7 – (A30) follow dual carriageway to mini roundabout – over roundabout. Up to a large roundabout take the 2nd exit into Western Way and the ground car park is 50 yards on the right. Entrance to the ground is via 2 turnstiles opposite the Social Club. The car park at the ground (£1 charge) gets full fairly early, if you arrive within 20 mins of kick-off we suggest you try the Retail Park public car park (free) opposite the ground. Basingstoke Station is based next to the town centre, about 1.5 miles from the Camrose. It is easily accessible from London Waterloo, Reading and Southampton. A taxi fare should be about £5. How to get a ticket for the Camrose Ground 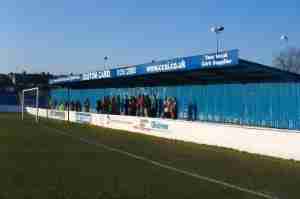 All Tickets Pay at the Gate on the Day. No Need To Book.  The matchday ticket includes entrance to the Clubhouse on that day for all First Team, Reserve and Youth Team (Saturday or Evening) Matches. On a matchday Saturday this would apply up to 7.00pm, after which time non-members would need to be signed in by a club member.  Ticket prices are £10, under 16’s £3.  There is a £1 charge to transfer to the main stand. Our last visit – March 2010 – Basingstoke Town 1 Lewes 1 Question: Which Blue Square team is the only one to have a twice winner of the European Cup amongst their midst? Question: For which club did Mitchell Bryant score six goals for in February 2010? Question: Where did the first goal scored by a goalkeeper in the FA Cup happen? If you answered Leeds United, Nottingham Forest or Reading to any of the above you are wrong.  Because all three answers are Basingstoke Town.  Yep, the newest of the new towns in Hampshire have more than a couple of claims to fame. 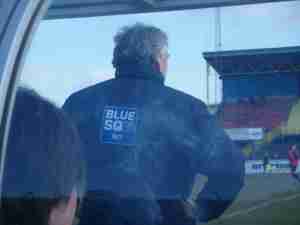 They are managed by Frank(ie) Gray who broke into the Leeds United team under Don Revie in 1972 and went on to make nearly 200 appearances for them alongside his brother, Eddie.  Now here is a great big of bonus trivia for you.  In the 2009 film The Damned United, the role of Eddie Gray was played by his son Stuart Gray…and who played Frankie Gray?  Answer at end of this blog post.  Then Cloughie came along, and was suitably impressed that he shipped young Frankie over to the City Ground when he moved there and the young full back ended up playing in two European Cup Finals for Forest (he also played in the 1976 one for Leeds, making him the first British player to play in one for two separate teams). Gray ended up at Basingstoke after spells along the M3 corridor with Woking and Farnborough Town in 2008 with an aim to try and take the club one step further.  They have been in the Blue Square South since its inception in 2004, having spent most of the previous decade in the Isthmian Premier League.  Dull and boring some may say?  Not at all.  Let’s look at three games in particular. 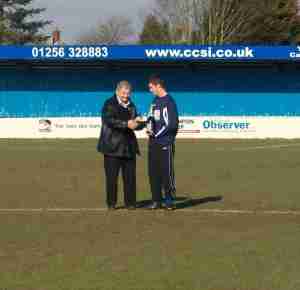 Weymouth 0 Basingstoke Town 6 -February 2010 A Valentines Day massacre (overused cliche I know) for sure at the Wessex as loanee striker from Reading Mitchell Bryant scored all six goals for the away side.   Bryant scored a hatrick in each half to become the only player in Non-League Conference history to complete a double hat rick and the first I can remember since good old Frankie Bunn scored six for Oldham Athletic in the League Cup “back in the day”. So embarrassed were the home team by their performance that the deemed the following game free entry for all home fans. Heybridge Swifts 3 Basingstoke Town 9 – 1998/99 A normal Isthmian League game in deepest darkest Essex saw Basingstoke trail 3-1 and down to ten men early in the second half before they found some magical pixie dust from somewhere.  Thirty minutes later they had scored 8 to pull off a truly remarkable result. Basingstoke Town 2 Dagenham & Redbridge 2 – October 2001 In the FA Cup qualifying rounds, Basingstoke were leading into injury time to Conference leaders Dagenham & Redbridge.  With the last throw of the dice Dagenham sent up their keeper, Tony Roberts up into the penalty area and he scored with a 25 yard volley. A feat that made FA Cup history. It was with recreating this moment that we set off at lunch time on Saturday 6th March for the biggest EFW/TBIR away day of the season.  Danny, Deaks, Cynical Dave, Lolly and were all up for this – the deal breaker being the £5 admission charge announced by the club – a saving of £5, or in simple speak a pint and a half free for watching a football match.  Obviously we would be there supporting Lewes, although based on their amazing ability to pull a draw out of the mouth of a victory last week against Worcester when they surrendered a 3-0 lead with just 20 minutes to go, but hope seemed to have faded and we were consoling ourselves that Aveley on a Monday night in the Championship Manager cup next season wasn’t such a bad thing (oh yes it is – read blog post from 2nd March 2010 below). So after a drive around the roundabouts in the town centre we pulled up at the ground just before 1.30pm to take in the big match atmosphere.  Basingstoke is not the most aesthetically pleasing town you will come across, and from memory of my time here at Cable & Wireless (or Mercury as it was in those heady early 90’s) I cannot remember too many nights out here.  Conversations turned to the orange ball debate, and when it can and should be used.  I threw in the point that it was used in the 1973 FA Cup final, memorable for the fact Bob Stokoes Sunderland beat Leeds.  Danny ventured the point that he used to know someone who owned a cat called Stokoe.  I tried to top it with the fact that my manager at the said role at Cable & Wireless was a certain Ken Knighton, who previously had actually been a player under Stokoe at Sunderland (he later managed them as well.  Wow top that I said….and Danny did by pointing out that the Basingstoke mascot, a large dragon was peering in the window.  His name, of course, had to be Stokie. 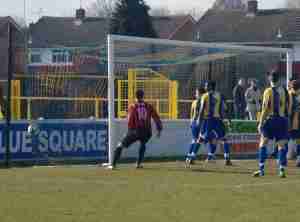 We marched the few steps across the car park, paid our £5 (and £1 for Lolly) and were in position in time for Joe Keehan to head home in the 3rd minute from Lewes’s very first visit into the home team’s penalty box.  I captured the moment on my trusty Samsung, much to the chagrin of the official Lewes snapper James.  The LLF immediately called for a withdrawal of a striker in favour of an extra defender to preserve the lead.  News filtered through of a goal at Upton Park, and as if to further justify my decision to turn my back on the circus for the afternoon, Kevin Davies scored the opener. Most of the remainder of the half was spent with the ball at the far end.  The normally safe-as-houses Rikki Banks in the Lewes goal was having a bit of a tough half, hardly helped by the strong sun in his eyes, but he nearly gifted Basingstoke two goals in a David James style performance.  Basingstoke were ruing the unavailability of Mitchell Bryant, who had won the player of the month competition for February, and had been replaced by the “larger than life” Jahson (with an “H”) Downes who looked like he had been across the road for his pre-match warm up.  In fact I do not think I have ever seen a ground so surrounded by junk food.  McDonalds and Pizza Hut literally overlooked the stadium, with Pizza Express doubling up as a car park at the far end. 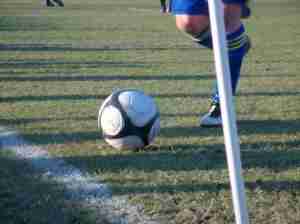 With the half winding down Deaks served up the even better news that West Ham were now 2-0 down at the Circus.  Fantastic news!  I held off telling Lolly for a few minutes as she was on one of her picture wanders (she is allowed to walk around the ground taking irrelevant pictures for those who don’t know her).  Deaks then pulled a great spot out of the bag – “Isn’t that Shaun Udal?” and sure enough, playing footie with his son was the ex-England cricketer Udal.  1-0 to Deaks I think. Half time came with Lewes still 1-0 up and we headed back to the club house for some refreshment just in time for Jeff Stelling to tell me that West Ham were “simply dreadful”.  Thanks Jeff – and how were Hartlepool getting on eh? (they were actually winning 2-0).  Danny managed to snap Mr Udal with the EFW logo and all were happy….for just four minutes, as that was all it took for Basingstoke’s Jide Ogunbote to level the scores. 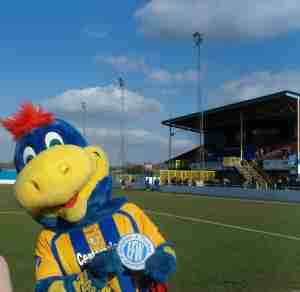 The rest of the half was dominated by one man.  The referee.  Mr Wes Linden.  Two words Mr Linden – “you’re shit”.  Time after time he ended up angering fans, players and managers alike with his bizarre decisions.  Take the incident when a Lewes midfielder was caught late after a ball out wide.  In full view of the ref the Basingstoke player kicked out at the Lewes player.  Referee waved play on, then stopped it as he realised that an incident could escalate.  So what did he do?  He booked the Lewes player. I thought enough was enough so went to have a word with the Lino.  And did he want to know?  Did he f  He simply ignored me, even when I said he had dropped the £10 that had obviously been given to him as a “sweetener”.  With the game entering injury time another flash point arose.  This time 18 players got involved and both linesmen were on the pitch ready.  Basingstoke’s number 6 started to walk towards the dressing rooms, sure that he was to be red carded not only for his lunge but his reaction to the Lewes players, yet again the referee saw no reason to issue a card at all.  On an afternoon when FIFA stated that the “door to goal line technology had been firmly closed” perhaps they should invest in referee watch to rid the game of such incompetence. 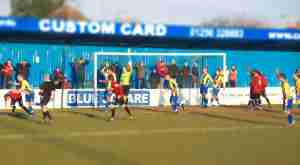 And so the game ended all square.  Lewes really needed the win to try and claw their way out of trouble.  Results elsewhere meant that it was a point gained, but at this stage three was the order of the day.  The TBIR taxi was required to take the LLF back to the station, taking in the highlights of Basingstoke in just 30 seconds, and we were back at TBIR Towers just over an hour later.  Was a 1-1 draw in the Blue Square South better than an afternoon at the circus? As Matthew Kelly once said – You Bet! Answer to the question was…Nobody…Nobody played the role of Frankie Gray in the film The Damned United as he wasn’t featured.
Share
Tweet
Share
Pins
Share
Like