Sudbury play their home games at the King’s Marsh Stadium in the Ballingdon area of Sudbury, previously home to Sudbury Wanderers. Since June 2010, due to a sponsorship deal, the ground is officially titled The MEL Group Stadium. At the time of A.F.C. Sudbury’s formation the ground consisted of two pitches, a training area, clubhouse, floodlights, a 200-seat stand on the West side of the main pitch and covered ends behind the goals.

A 300-capacity terrace (the Shed) was constructed on the East side of the pitch in 2000 and houses the more vocal section of the crowd. A new clubhouse, also containing a grassroots football and education centre, was completed in 2010. The ground is fully enclosed by fencing and has turnstiles at the main entrance. A.F.C.

Sudbury sold Sudbury Town’s former ground, the Priory Stadium, to a housing developer in June 2007. The money from this sale was earmarked for paying off loans, and capital gains tax, as well as a new clubhouse and changing rooms. Planning permission for the construction of the new facilities was granted by Babergh District Council in August 2008, though various conditions regarding issues such as possible land contamination, the site’s archaeological value, risk of flooding and drainage are required to be addressed before work may commence

How to get to King’s Marsh

From Colchester enter Sudbury and follow signs for Halstead/Chelmsford. Go aross the river bridge and go under the old rail bridge, then turn right at the traffic lights (Kings Head) into Bulmer Road and the first right again into Brundon Lane.The road narrows before reaching ground on the right hand side.

From Braintree take the A131 through Halstead to Sudbury. On descending hill into Sudbury turn left into Bulmer Road then take the first right, Brundon Lane. The road narrows before reaching ground on the right hand side The nearest station is Sudbury which is on the Market Teys branch line on the Liverpool Street to Norwich line.  The ground is a good 2 miles away so a taxi is probably your best bet in reaching the ground.

A bargain £7 for Adults, £3 for concessions.  £1.50 for programmes just inside the stadium.

Some twelve miles and 33 minutes later we ignored the sign for the sewage farm and drove down a narrow country lane to AFC Sudbury’s King’s Marsh ground.  The home of Gainsborough and Constable, Sudbury is as quaint as a small market town could be with thatched cottages, Britain in Bloom signs and cricket being played on the green. Parking on a roped off field gave us the impression it was a Summer Fete or Garden Party and as if the club were waiting for the appearance of “Two World Famous Bloggers” (Not my words, but those of Charlie Dobres at Lewes FC), the teams emerged just as we did from the strange conservatory which acted as the turnstiles.

To say the Ryman League One South has been a two horse race this season is a bit of an understatement. Since prior to Christmas the top of the table has been all about East Thurrock United and Needham Market.  Three weeks ago they passed the point where they could be caught by anyone else. 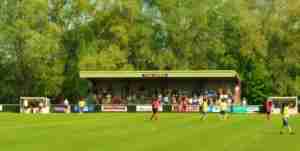 Needham Market are following in the footsteps of Lowestoft Town and Bury Town in strengthening the position of Non League football in East Anglia.  Last season they won the Eastern Counties League, gaining promotion to the Ryman League structure for the first time.  Fortunately they had already invested in their ground to satisfy the beauocrates of the League and this season they have continued this momentum.

This season it has been about the goals of Craig Parker and Sam Newson who have 48 league goals between them, nearly 60% of the team’s total for the season. This route will be familiar to AFC Sudbury fans.  They have won the Eastern Counties five years in a row before at last the powers that be deemed their ground could cope with an extra dozen or so fans.  They also got to three consecutive FA Vase finals during their league domination, although they lost all three.  This time last year they were floundering in the Southern League Midland division, travelling to places like Aylesbury, Rugby and Atherstone Town.  A year down the line after moving into the Ryman League they have had a much better season again thanks to the goals of James David Baxter who has weighed in with 22 so far this season. 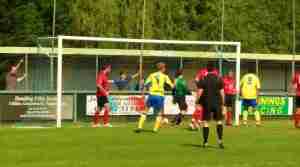 The club has invested its money wisely in facilities.  With a nice size bar, function rooms, its own air raid siren (more of that later), very good food and drink and signs for just about everything it was the perfect setting.  And the game?  Well we couldn’t complain. AFC Sudbury raced into a two goal lead against the run of play.

First Jack Wignall headed home through a crowd of players before a minute later James Baker did his reputation no harm with a fantastic header into the bottom corner and a superb run up field by Sudbury’s left back.  Two nil at such an early stage was harsh but the Needham fans rallied their team and for the remainder of the half they tried any which way to break through the home defence. 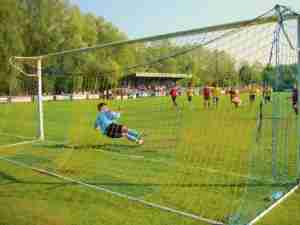 After a quick refreshment top up (a £1 for a pie!!!), it was back into the action.  Sudbury knew that anything but a win would end their season, whilst Needham had little to play for apart from Suffolk bragging rights.  And what better way to rally your team than a good old fashion air raid siren.  Dug out from a long lost cupboard in the ground and still sporting its “Property of the Home Office” sticker, it was being used in the second half to “wind up” the away fans.  It didn’t work as Needham eventually found their feet and thanks to some bizarre refereeing found themselves back in the game when our friend in black awarded a controversial penalty to the visitors.  Two – one and the away fans went into choruses of “Danny Last’s Red and White army” (well, that is if you believe Mr Last’s version anyway). And just as we saw in the first half Needham followed this one up with another less than sixty seconds later. 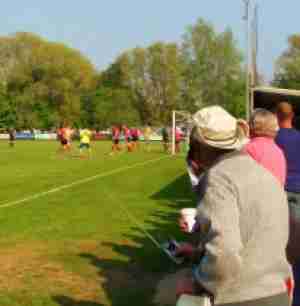 With scores elsewhere filtering through on the terrace trannies (How times have changed – this now means something completely different), Sudbury knew that they needed to score a winner.  But that goal didn’t come, and it was the away fans who celebrated the “moral” victory and left Sudbury heartbroken for another season. The official crowd of 512 made it the joint highest in the division for the season (ironically with another home gate at Sudbury) and it was great to see so many families enjoying the game and facilities. I am not going to mention events some 120 miles south of here.  That is for another day and another post.  For now it was back in the car and a trip back to the Capital of Cool (aka Copenhagen) for me. We came, we saw, we ate a rather nice chicken burger with lettuce and we drank cider.  That is all I am saying. More pictures can be found here.

Mesut Ozil has yet to put pen to paper with Arsenal, despite Arsene Wenger stating that the German won’t leave the Emirates in January. Some of the European giants ar...