We’ll never get closer to Wembley than this…

Share
Tweet
Share
Pins
Share
Like
The road to Wembley is not paved with gold.  In fact for 99% of teams (well, actually 98.8% now that the FA Cup Semi-Finals are played there), the nearest they will ever get to the home of English football is a small non-league ground at Vale Farm which is in between Sudbury Town and North Wembley tube lines.  Vale Farm is the home of Wembley FC, the controversial non league club who have been the beneficiary of the Budweiser dollars in their attempt to engineer a “rags to riches” story.  But for all of the branding, FA-endorsed news stories and publicity stunts, there is another team that plays here – Hendon FC. On the last warm sunny day of 2012 I sat on the Bakerloo line with Patrick Marber, one of my fellow board members at Lewes FC as we passed the Arch of Wembley Stadium.  We both paused our conversation about the pre-match meal we had enjoyed in Farringdon including a Nutella pizza and chocolate salami and silently looked in awe.  We knew this would be the closest we would get to the famous stadium wearing our Lewes FC badges with pride. 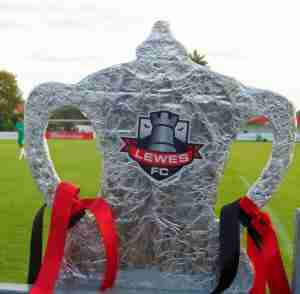 Our journey to north-west London in the FA Cup was being made in good spirits.  Despite the Rooks shaky early season form, this was the FA Cup and everyone from Pav the kitman to Terry Parris the chairman knew that the prize pot was very important in the journey to a self-sufficient club.  The prize fund had risen to £4,500 for this game, around 15% of the season’s budget.  Small potatoes?  Hardly. It was a lovely afternoon.  We walked across the park from North Wembley tube station, pausing to take in a few overs of cricket, was full of hope.  After all, Hendon had started the season indifferently too, and on paper Lewes should have this one in the bag, especially with the solid spine of the team, Robbo and Beckford, back in the starting XI. Lewes had last visited Vale Farm a year ago.  Since then Budwesier had obviously sent in their branding team with full effect.  Every surface had been painted red and rebranded.  The bar was brand new, obviously was Budweiser on tap and even the pool table was covered in a Budweiser baize.  Apparently Hendon also played here too, although not for much longer as next year they were heading west to share with Harrow Borough.  Few concessions had been made to the Greens, with a token couple of boards around the edge of the pitch.  But for one afternoon it was all about the FA Cup (with Budweiser) and the eyes were on the prize. Hendon 3 Lewes 0 – Vale Farm – Saturday 22nd September 2012 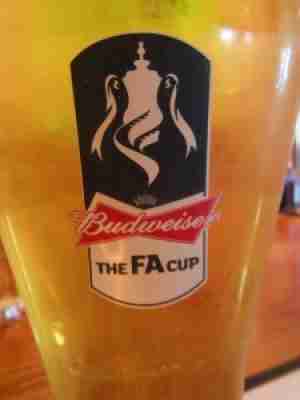 I am not taking anything away from Hendon, but Lewes were shocking.  In the few years I have followed them I have rarely seen them play so badly, surrendering their place in the next round of the FA Cup without so much as a whimper.  This was a game that Lewes should’ve won – that was until a ball was kicked.  From the moment the referee started the game, Lewes weren’t at the races.  As one of the loyal few fans who had made the long trek to this game I felt gutted.  As an owner of the club I felt annoyed that the prize pot had slipped through our open hands.  As a director of the club I stood and watched, knowing that I had to shoulder some of the blame as a custodian of the club. Lewes should have sensed that they shouldn’t underestimate Hendon as early as the third minute when the ball flashed across the box and the forward narrowly failed to put the ball into an empty net. The Rooks actually then got on top, with Beckford pulling the strings, Walder putting in the tackles and Nathan Crabb causing a nuisance to the Hendon back four.  Beckford came the closest to breaking the deadlock when his shot from distance was tipped over the bar by the keeper. Deaks and I headed to the bar to get “some nondescript” beer as Dave called it. A pint of fizzy, weak American beer was the high point of the half.  At least it was nil nil.  Wrong again.  As we took the first sip of nothingness Hendon scored.  A poor defensive clearance found its way to Dean Cracknell and he slotted the ball home.  Hmm, not quite in the plan Patrick and I had on the way up. Still, forty-five minutes to get back on course and get our name in the draw on Monday morning.  Alas it wasn’t to be as Elliot Charles and then substitute Michael Murray put the Greens into the next round, leaving the Lewes travelling band of 25 Lewes fans scratching their heads as to what had gone wrong.  You don’t get a second chance in the cup and it was now dawning on us that not only would we have a free weekend when the 3rd Round would be, but Wembley Stadium would never be this close. 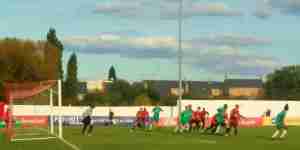 I have the ultimate respect from the small band of volunteers who keep clubs like Hendon running.  The official attendance was just 166.  Take away the 25 or so Lewes fans and around the same number of Hendon officials.  You are left with a very small number of fans who will have contributed to the revenue of the club.  The FA Cup money will come in very useful for the club, but when it runs out, what then happens? As their Chairman wrote on their website – “And then there’s the final group of fans ? who no longer attend home matches, no longer pay (or have never paid) their Trust memberships or do not participate in the Snowball lottery. They “look out” for our results on the website or via Twitter. They “like” our Facebook page.” “We need people to come to home games and encourage their friends to come too. We need people to buy season tickets even if they are only going to get to the occasional game. We need people to join (or rejoin) the Trust. We need people to take a Snowball (or two) and encourage their friends to do so too. We need people to sponsor match balls and players? kits. We need people to make donations. We need people to volunteer for match day duties.  In short, we need people to do more than they are doing. Otherwise, there might not be any more results to look out for on the website or via Twitter and there may be no Facebook page to like.” I applaud his words 100% and this should be a message every club takes to heart.  As a fan of Lewes I know we are in a better position than most clubs at our level thanks to our home support and backing of the town.  As a member I am also eternally optimistic that the club is genuinely owned by people who care and as a Director of the Club I am grateful that we have a plan for the future.  So why did we get today so wrong on the pitch?  Who knows.  I do not believe in bad luck (as Adrian said to me near the end of the game “There is no such thing as bad luck in football, just bad technique), nor do I buy into the “bad day at the office” theory.  Games are won and lost in the preparation for the game and that is why Hendon won, and Lewes lost.  There will be other cups (starting next Sunday in the FA Trophy at home to Lowestoft Town) but it is the dream of every single Non League club to reach the 1st Round (or further) and draw a Sheffield United or a Portsmouth this season. That dream will have to be put back in the box for one more year.
Share
Tweet
Share
Pins
Share
Like

Morata explains why he is not thinking about Real Madrid return

Chelsea ace Alvaro Morata has given his reasons why he would rather stay at Chelsea than return to Real Madrid amidst stories that the White Ballet regret his sale in the summer...