Share
Tweet
Share
Pins
Share
Like
What a day this promised to be.  Three (well two and a half) fiercely contested local derbies, either side of the River Thames, which thanks to some fortuitous scheduling, that I could go to, as well as still putting in some “Fuller Festive Family Fun”.  Christmas is all about spending time with your loved ones, catching up on the events of the year and generally being around those nearest and dearest to you.  But when the words “Let’s go to the sales” are mentioned, all love goes out the window and football becomes a viable option.  Hence, when the three Fuller girls all expressed a wish to go shopping, I played the football get out of jail free card and planned my day of hot and spicy local derbies. 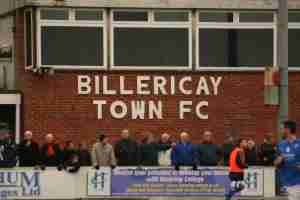 First up was a trip under the Thames to Essex for the “Battle of the M25 junction 28” as they call it in these parts. Billericay Town sat proudly on top of the table before a ball was kicked.  Despite their nearest rivals all winning yesterday, their amble goal difference of plus 27 saw them safely sit in first place.  Visitors AFC Hornchurch lay in fourth with a game in hand and just four points below.  So a win for either side today could be pivotal in the final shake up. Whilst most football leagues will boast “this is the most difficult division to get out of”, few can claim that at the halfway point in the season there has been five different leaders, or that the top if they won their games in hand would be separated by just five points.  The Ryman Premier League has proved to be a great league for the neutrals to follow, but a bugger if you are the follower of one of the clubs.  With the Christmas period throwing up the odd derby or two, we would have been a fool to miss this one.  Billericay Town versus AFC Hornchurch.  Two teams separated by the M25 just a few miles apart and by just four points at the top of the table. This was hard to miss.  With Lakeside just a few miles away I was able to deposit CMF and The Little Fullers at the Cathedral of Orange Tans and head northish through the vineyards of Essex to Billericay, home of Steve Davis, Alison Moyet and Lee Evans.  All three would surely be at New Lodge for this top of the table clash? I cannot think what else they could be doing on a post Christmas afternoon. 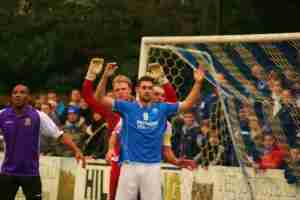 Billericay Town have surprised many this season with their rise to the top of the table.  Just two defeats, one of which was in the first week of the season to Lewes, has seen them jump above the likes of Lowestoft Town, Hendon, Lewes and visitors Hornchurch.  Their success has been built on a strong goal scoring record that has seen them average over two goals a game this season, and seen them put the likes of Kingstonian Wingate & Finchley, Tooting & Mitcham United and Canvey Island to the sword this season at home so far.  Their style has come in for some criticism as being too direct, whilst visitors Hornchurch had been called “too physical” in the past. Frankly, football is about results and so if a style works for a team then they deserve their success.  The facts suggest that whatever style works in this division as they are top of the league, with 46 goals scored to their name. The Club have also been scratching their heads as to what they can do to get more people through the gates.  I sympathise with them and this was my whole reason for writing my Blueprint last year. One player who unfortunately would not be gracing the pitch was Billericay keeper Nicky Morgan.  Morgan was involved in an incident outside a nightclub in Essex in October and received injuries that resulted in him being paralysed from the waist down.  The police have now arrested a man in connection with the injury.  The club have been incredibly supportive of Nicky and we also wish him well. As we drove up through the Essex countryside we came across a line of parked cars on the road.  Surely this couldn’t be for the football?  After all, here was a team who were averaging 300 give or take a few.  According to my good friend TomTom we were still nearly a mile away.  But yes, it seemed that the locals had all read the article on the website and had put on their Christmas jumpers and hot-footed it down to the biggest game in Essex. Billericay Town 0 AFC Hornchurch 1 – New Lodge – Tuesday 27th December 2011 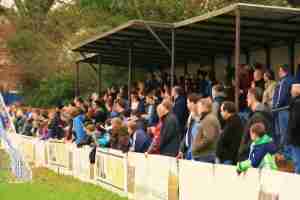 Rule number 1 – when you moan about not having enough fans and then they turn up en mass, make them welcome.  The attendance of over 1,100 put strain on every aspect of the club.  The one turnstile struggled to cope in the lead up to kick off, the hot food ran out in the 44th minute as we were queuing, the bar had queues of fifteen minutes.  I appreciate it is a chicken and egg situation but some forethought could have avoided hundreds of people going away from the ground with a poor impression. The game in truth failed to live up to its top of the table billing.  An over fussy referee tried his best to antagonise the players, managers and fans alike with some strange decisions and a pitch that made playing the ball on the ground impossible but few can argue with the result in the end.  Hornchurch were the stronger team in the second period and before they had scored the only goal, hit the bar with a well taken free kick. 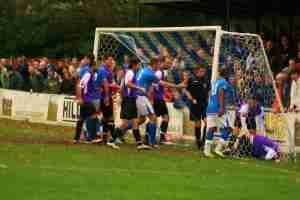 Billericay had been likened to Stoke City simply because they have someone who can hurl the ball in from the touchline.  Sam Berry’s talents were used whenever there was an opportunity in the game and once or twice his throws caused chaos in the Hornchurch area and the odd controversial moment when the referee automatically penalised the home side irrespective of the outcome of the throw. Both teams are strong, well organised and that seemed to cancel out their attacking threat.  As someone had said to me prior to the game “It won’t be one for the purists” and it certainly wasn’t. Glen Poole had the best chance of the first half for the home side but his shot was well saved by a confident, if bruised Hornchurch keeper, Joe Woolley. In the second half the momentum swung to the visitors and on the hour they got their goal.  Michael Spencer was sent away down the wing and his cross was met by Tommy Black.  His first effort was somehow scrambled off the line but he followed up and turned the ball home. With time running out, Billericay pushed forward, first putting one centre back up front, and then another.  Finally, keeper Dale Brightly was added to the attack.  However, from one set piece Hornchurch broke quickly and with the goal empty. Hunt shaped to shoot from the half way line but was brought down by a Billericay player.  Technically he was the last man, even though he was in the Hornchurch half.  The referee decided to give a yellow in one of those decisions that nobody will ever agree on. Three points to Hornchurch gave them their ninth consecutive win and lifted them up into third, above Lewes and mean that the top four in the Ryman Premier are now separated by just four points.  As Glenn Frey once said – “The Heat is On”. As the crowds tried to make their way home, we headed through the country roads of Essex, avoiding the eight mile traffic game on the M25 to Mill Road, Aveley for our second slice of Essex United in an afternoon. Aveley 0 East Thurrock United 3 – Mill Road – Tuesday 27th December 2011 Well, sort of.  We arrived just as the teams came out for the second half, with East Thurrock United holding a 3-0 lead thanks to an eleven minute hatrick from Sam Higgins.  More was sure to follow to warm up the cockles of the bumper 250 people in the crowd. 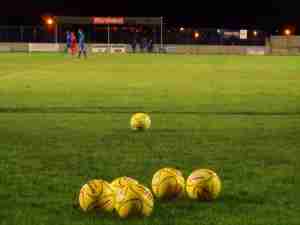 Aveley’s ground is hard to love.  It looks as if the pitch has shrunk, or that it was once home to an Aussie Rules team.  The huge grandstand with its paddock in front looks like it belongs to a racecourse somewhere and with wasteland behind the other side of the ground it begs for some love and attention. However, it is home to them (and Romford FC) and is more than adequate for their needs.  Alas, hot food had also run out here as well-meaning that Lolly had to go without her chips (for her Non League chip survey). It seemed like all of the energies of the players had been spent in the first half as both teams failed to find any rhythm, demonstrating why both had started the day in the bottom three.  The Aveley keeper, David Hughes, was the busier of the two in the second period, making a fine save from Newby and Smyth, underlining the dominance of the away side. A vibrating in my pocket meant that it was time to leave.  CMF had finished her shopping and it was time for me to return to the safety of South of the River.  Ryman  Premier League scouting assignment completed for the day.
Share
Tweet
Share
Pins
Share
Like

The 13 Best Football Books Ever Written

Football is like an iceberg. What carries the weight of the sport often remains invisible to the eye. On the surface, some men kick a ball about, but venture to explore deeper, and you w...