Malcolm in the Middle of the park

Share
Tweet
Share
Pins
Share
Like
After Wednesday’s win against Met Police where the result was more important than the performance, Steve King had put the pressure on the team by promising that this would be a better spectacle.  However, the worry for all those involved in the club was the first ever “head to head” game with Brighton. 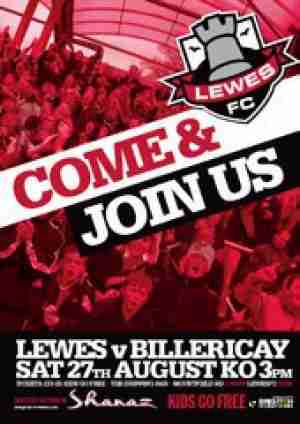 Just five miles down the road in their shiny new Amex Community Stadium, high flying Brighton & Hove Albion would be taking on Peterborough United at exactly the same time as Lewes were kicking off against Billericay Town.  Many fans had called for the Rooks to move their kick off to try and accommodate those “floating voters” who support both teams (mentioning no names Mr Last!), but it was decided to “wait and see the impact on the crowd”. After a morning on a 30 footer in Brighton Marina, soaking up the sun I arrived in Lewes at 1.30pm.  First immediate problem.  No parking spaces anywhere near the ground.  Many Seagulls fans who live this way had chosen to park in Lewes and get the train one stop to Falmer.  So I was forced to park up in the town centre and walk down.  Not that any of the pubs near the station will mind Brighton’s new ground being so close as they were doing a roaring trade. Anyway, enough of that bitterness.  The reason I wanted to park close by was that I was James Boyes for a day and thus had to carry my camera equipment.  Now those of you who know James will remember he is a Lewes fan.  And a Brighton one.  And a Manchester United one, oh and also a FC United of Manchester fan.  But it also appears he is a Rugby League fan and had decided to treat Mrs Ginger Action to a day at the Challenge Cup Final instead of being at The Dripping Pan. So I was filling that little portable stool for the day.  I did ask to borrow the “magic trousers” but apparently I wasn’t deemed worthy enough. The visitors Billericay had brought a few more fans than Met Police.  In fact if Pepsi and Shirley would have turned up in Town’s colours it would have been more than Met Police.  Hitting the bar early, the club soon ran out of Blue WKD drinks and fizzy pop bottled lager.  I am a firm supporter of the notion that the club should only sell Harvey’s beer and do its bit in educating the masses to proper beer. Whilst we were only two games into the season, midweek games had thrown a few spanners in the works.  Lowestoft, installed as firm favourites after their win against Lewes last week, lost away to Wingate & Finchley, Carshalton drew with Wealdstone and Bury Town had lost at home to Hendon.  Billericay Town arrives a win against Leatherhead and a draw at Harrow Borough. 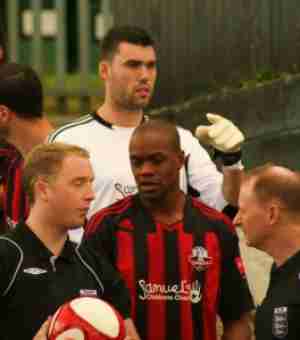 Steve King announced an almost unchanged side, with big Stuart Robinson back in goal having recovered from injury.  Unfortunately King was still serving his touchline ban so had to make do with a seat in the stand and get his instructions down to the bench by throwing paper airplanes. As 3pm approached a quick scan of the crowd showed how difficult the “head to head” games will be as there was certainly less than on Wednesday night in the ground.  Yes, some people are still on holiday but there is no denying that having the same kick off time probably impacted the attendance by 20% at least. Lewes 2 Billericay Town 1 – The Dripping Pan – Saturday 27th August 2011 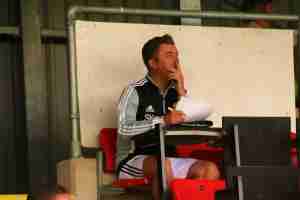 Feel good football.  That is what King had promised pre-season when we interviewed him for Viva Lewes and what better way to put the smiles back on the faces of the fans than another win.  Back to back wins are something of a rarity in these parts in recent years so it was a good feeling when the final whistle eventually went, and as promised the performance was almost as good as the result. Lewes had the better of the opening exchanges and nearly opened the scoring in the eight minute when an innocuous shot from Michael Malcolm somehow confused the keeper and the ball rebounded at a snails pace into his arms off the post.  Just a minute later Jamie Cade crashed into my photographic colleague a few yards away, causing a massive panic that we didn’t have “high vis” jackets on.  As if that would help.  If a player is bearing down on you they are hardly likely to be able to swerve at the last minute just because you are glowing luminously.  One duly arrived for me with the name Kevin on.  Thanks for that. 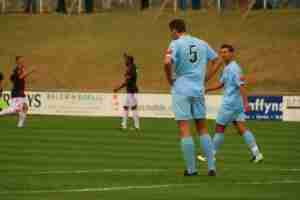 Fifteen minutes on the clock and almost a carbon copy of the near miss from Wednesday saw Malcolm lift the ball over the Billericay keeper from twenty yards.  This time the ball bounced kindly and into the net as opposed to over it.  One nil Lewes. Fifteen minutes later one became two when Malcolm controlled the ball in the area, looked up and picked his spot in the corner of the net.  The Rooks fans had to pinch themselves.  Were we really playing good football and scoring goals?  As if to remind us who was boss, the heavy rain started to fall and I regretted not being more insistent with Mr Boyes on getting his magic trousers. Half time, and the draw was made for the naming rights to the main stand.  An ingenious idea, even if I say so myself, and whoever thought of the idea should be given a CBE.  Every company that bought a Business Supporter package was put in the hat and one would be pulled out at random.  Poetic justice that in a town famous for its brewery the lucky recipient was a local pub.  So now when you come to The Dripping Pan you can take a seat in The Gardeners Arms Stand. 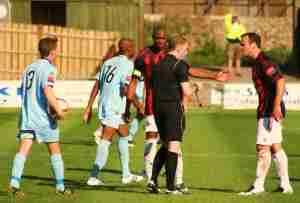 The second half saw a slight change in tactics.  Lewes’s midfield tightened up on their opposing numbers, meaning the forward momentum was not so strong.  In the past few years this inevitably led to a nervous period of play, and all was fine until Billericay scored with just eight minutes to go.  Tense, nervous, headache? But the final whistle put us out of our misery.  In truth apart from the goal, the Essex side hadn’t really threatened Robinson in the second half.  Which is more than can be said for a couple of their fans who seemed to be a tad unhappy with their team, and it took a few words in the bar afterwards from the manager with the fans to calm things down. So a 100% home record is just what the doctor ordered.  Next stop, the local derby with Horsham before a trip next Sunday to Wembley to league leaders Hendon. As a walked back to the car I overheard a group of Brighton fans complaining about having to wait nearly 45 minutes for a train.  “You should have come to Lewes” I told them….”Yeah but they never win and the ground is shit”.  Yep, looks like it doesn’t it. 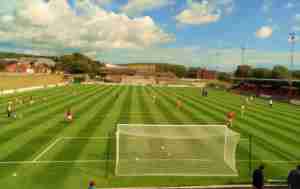 About Fetcham Grove Leatherhead’s ground is a perfect non league venue – old rambling stands, a decent bar and hospitable fans.  The main stand is a small covered affair with an old tin ...