How was it for you? Part 4 – From Uxbridge to Uckfield

Share
Tweet
Share
Pins
Share
Like
Andy Ollerenshaw, author of From Wick to Wembley continues our theme of Non League highlights and lowpoints from the past season. My season started in Stockholm and ended in Sussex. From an Allsvenskan tie between Djurgården and Gefle IF in the imposing Olympic Stadium to a County Division Two title-clinching game in sleepy and rickety Uckfield. In between, throughout a season of changing seasons, I went to around 55 games in total. Not a huge amount by the standards set by the groundhopping fraternity, but a lot for me who has an 11 year old son playing the game both Saturdays and Sundays, and a wife at home double checking the small print on the divorce papers. Ash to Altrincham, Bristol to Bognor, Cornwall to Croydon and Marine to Supermarine. My love of non-League took centre stage with the odd League encounter thrown in to remind me that I’m not actually missing a damn thing.

Highlights? A cliché I know, but far too many to mention. Following that small club at the end of my lane, Chertsey Town, in their bid to attain Step 4 football was a real roller-coaster. Looking for all the world to be out of contention by Christmas, they then went on a 12 game winning streak which catapulted them back in with a shout for the Combined Counties League title. In the end they clinched promotion finishing second, with Guildford City winning the league but not having the requisite ground grading to progress. To win at Egham Town (our fiercest rivals) on the last day of the season was the icing on the cake. To find myself involved in the champagne reverie after that final game, displaying a degree of emotional involvement, took me by surprise. A few years ago I could never have imagined celebrating the success of a non-League club so manically, let alone find myself wiping away the odd tear (hay fever, naturally).

This season I’ve witnessed some cracking matches up and down the country, each game costing little more than a matchday programme at Eastlands. If a bulging onion bag equates to value for money, then I have been royally spoilt with goals a plenty. 12 (count them, twelve) without reply for Flackwell Heath (vs Oxford City Nomads), a 7-4 win for Uxbridge at Marlow and several 5-2s, 4-3s, 5-0s and 4-0s. Plonk me down next to any non-League sceptic and I’m happy to eulogise about how non-League football offers so much for so little. Lowlights? Missing the odd game whilst stationary on the M25 seemed to happen more than it really should. Chertsey’s exit from the FA Vase at the first attempt, at home to Moneyfields back in November, was a bitter blow. The fever pitch expectations fuelled by a great run in the competition the previous season seemed to make that more painful than it really should. 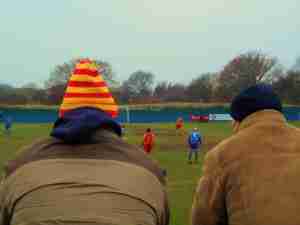 But the (few) low points pale into insignificance. With hand on heart, I can honestly say I’ve enjoyed every single game this season. OK, some results may have not gone as one would have wished, but in the last few years I have come to realise that the non-League game is fundamentally about one thing: the people. My season was our season. The friends who have come to games with me ‘making a day of it’ in previously untapped regions of the country. The craic, the laughs and the banter. Others who share the same love of this part-time game that you meet when you least expect – on a cold and misty Tuesday evening in deepest, darkest Surrey for example. The band of amateur photographers who compare the size of their lenses and produce professional results. The non-League aficionados who are a rich source of information about their club, their local game and their sense of place in amongst it all. The club stalwarts and volunteers whose lives revolve around keeping their small clubs in existence, a daily battle for many. Meeting folk for the very first time and being touched by the warmth of welcome: the committee at Ascot United we met on Non-League Day; the Community Officer at Marine; the Chairman at Altrincham; the club photographer at Slough Town; the Welfare Director at Poole Town. It’s yet another cliché, but the list really is endless. So 2010/11 is over, and I feel I know more people now than I have ever known. I’ve experienced another glorious season of getting excited about visiting places for the first time, of planning trips around potential feature articles waiting to be written, of meeting friends old and new and chewing the fat with some real characters. And persuading anyone who cares to listen that this non-League lark is a bloody joy to behold. I can’t wait for it all to start over again.
Share
Tweet
Share
Pins
Share
Like

Liverpool did it - they put an end to Pep Guardiola's spectacular undefeated run.  With the more of Philippe Coutinho gone, Jurgen Klopp's men looked as uni...