Share
Tweet
Share
Pins
Share
Like
To be fair there was a dozen or so titles I could have used for this mini-blog about my visit to watch South Park.  Not since Rhubarb & Custard Rovers went bust back in 1978 has a football club spawned its own animated show.  Not even the Oil and Gas billions of Chelsea and Manchester City led to the resurrection of a new series of Hong Kong Phoey or Top Cat (rumours that Barcelona have signed a deal to remake that as “Top Catalunya” are yet to be confirmed).  According to the Buzzfeed website, the catchphrase in the title is the most recognised line in the animated sitcom that has been running for 18 series since the late 1990’s.  Oh how the fans of Ryman League South side South Park must laugh every time visiting supporters leave.  The club apparently still has a ban on signing players called “Kenny” for fear of their lives. The football club’s trajectory has been at the expense of the TV show.  There could only be the place for one South Park in the media and it was the time of the football club to claim their rightful mantle.  Just ten years ago the club were playing in the Crawley & District League.  They didn’t play their first national cup game, the FA Vase tie against Shoreham, until 2006 and five years ago entered the FA Cup for the first time.  In 2014 they won promotion to the Ryman League and more than held their own in their debut season last year, mainly thanks to the goals of Chris Smith (34 goals) who had now joined tonight’s opponents, Burgess Hill Town. 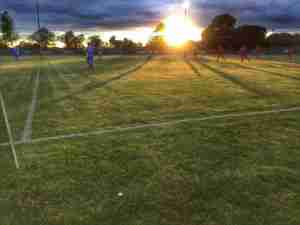 One of the keys to their success is having a 7 day a week facility that is used by the community.  Whilst the clubhouse sits a couple of hundred of yards from the ground, it is used for all hospitality for the club as well as a cricket pavilion and darts.  Dare I say there was a fast shoe shuffled there a few nights a week too.  For those who don’t know where South Park is then let me enlighten you.  Head around the M25 to junction 8, follow signs to Reigate, navigate the one-way system and then head down the narrowest, twisty country lanes for 1.4 miles and you have arrived at your destination. Tonight’s game was a bit of a bonus as it gave me the chance to have a little look at one of our opponents next season, Burgess Hill Town who swept all before them last season and judging by their pre-season acquisitions will be quite a proposition this season.  Not that you can ever learn anything from friendlies, apparently. South Park  1 Burgess Hill Town 4 – King George’s Field – Wednesday 29th July 2015 The one vital component in scouting a team is a team sheet.  It’s all very well in the professional era where all of the players have names on their shirts, but at a Non-League level it is neigh on impossible to find out who is who unless you know the club well.  Which I didn’t.  Still you can look at formations and style of play – that is until they change that two or three times in the game.  Still, I had a nice bottle of Hog’s Back Brewery TEA which more than made up for my almost blank sheet of paper at half time. 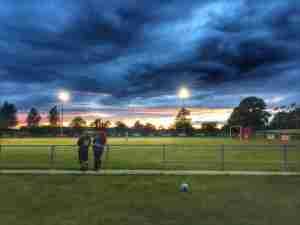 This really was a game of two halves.  It also broke my run of twelve consecutive games where both teams had failed to score, a run that had taken me across the world and back. South Park started the brighter and took an early lead and had the better of the midfield exchanges in the first period, then after the break it was a different story as Burgess Hill changed things around and scored four goals which their dominance deserved. Time will tell how far the South Park journey will go.  For now they seemed very much at home in their little country pad, with an excellent community facility, looking to upset the bigger teams in the league.
Share
Tweet
Share
Pins
Share
Like

Crawley is a swear word in Non League terms.  The funny thing is that this is a relatively recent situation.  In fact only three years ago when I last visited the Broadfield Stadium the “...