Share
Tweet
Share
Pins
Share
Like
Two facts that you may not know about Goole. Firstly, when you type it into any Apple device, it will try to suggest to you that you really meant Google, and secondly it’s bloody cold. I can’t help think that the club have missed a trick with this whole naming thing. Perhaps the town could create their own global search engine or an email service? Goole Chrome has a good ring to it, Goole Drive could be a new road name whilst the local newspaper could rebrand as Goole Buzz – bound to be more successful than Google’s attempts. The domain name, Goole.com has actually been registered since 1999, almost at the same time Larry Page and Sergey Brin started making their magic in a Stanford University dorm room, whilst the town itself can trace its history back to 1629. Any court in its right mind would surely side with the people from the East Ridings of Yorkshire. As we leave the M62 Northern Steve asks the valid question, in my opinion, as to whether the residents of the town refer to themselves as “Goolies”? His motivation for the question seemed to be the phallic looking structure on the horizon, which after a quick “Gooling” (using my new local Search Engine website) turns out to be a water tower. Such architectural follies are so British, so Victorian, so wonderful. 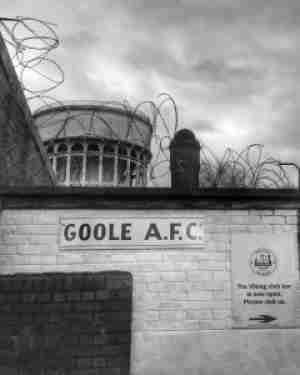 We were keeping the Victorian theme by heading to the Pleasure Grounds (using Goole Maps as our guide) as one should do on annual days of rest. Alas, the Pleasure Grounds here do not have the traditional bandstand, rides, an orangery, menageries or even a zoo for exotic animals, such as those that used to exist in 19th century London. Instead the Goole version has two goalposts, a stand, some beer and pies (always with peas in these parts) home not of fine Victorian gentlemen but The Vikings of the Evostik League North, First Division South. The water towers, nicknamed salt and pepper, that overlook the ground act as beacons, lighting the way to the ground from the M62. Hands up who thinks modern Britain is crap now eh? Driving through the town on the way to the Victoria Pleasure Grounds suggests that few other people in these parts were heading to the big festive derby with Lincoln United. Goole is a town of nearly 19,000 souls, once an important port but now struggling to find an identity as is the case with hundreds of other British towns. The High Street (well, Boothferry Road anyway) is symptomatic with the failing British retail scene. Pound stores, Charity shops, Bookies and Weatherspoons. No problem with that, especially as we handed over our £2.50 for our lunchtime pint but Goole was losing its identity. The history of the football club stretches back over one hundred years and various different entities. They started off with a plain old Town, then Goole Shipyard Football Club. When the hull fell out of the shipbuilding industry they found the Town down the back of the sofa which they held onto until financial problems saw the club go under. From the ashes came Goole AFC in 1997, the current version although the club tried to sneak the Town back a few years ago, enraging the West Ridings FA in the process who take such matters very seriously – sod trivial matters like racism, match fixing and respect campaigns, the serious business is about a town wanting to add the word “town” after their name. 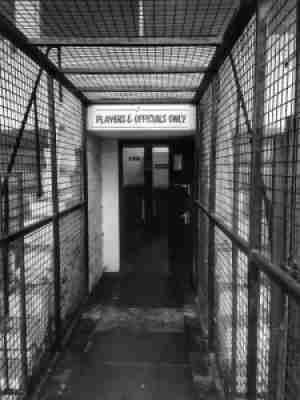 Whilst progress hasn’t yet happened on the pitch, the club are still fighting. Quite apt that the current manager, Curtis Woodhouse, held the British Light-Welterweight boxing title until June, although perhaps too much of that fighting spirit rubbed off on former captain Karl Colley back in January when after being sent off for violent conduct in a game against Coalville Town decided to attack a fan. The club acted swiftly, sacking Colley who had previously been sacked by Belper Town for his conduct. I’m sure the West Riding FA will get round to adding their sanctions once they’ve dealt with other major incidents such as teams deciding which colours to play in or renaming a tea bar. Reading the programme notes it appeared that the club’s ownership was once again unclear. Being part of a community-owned club like Lewes does make me feel blessed at times. Perhaps this is the model that could work for Goole, bring the much-needed identity and inclusion to the local community that they talk about being missing. “There is so little to cheer (about) in Goole alone that sport is a way of transforming the image of a place and sadly Goole football over the last 30 years has been unable to do so.” Tough words from the club in the match programme but they are 100% bang on. Lincoln United are Northern Steve’s local team. They had lost the reverse fixture a week ago in Lincoln, so revenge was their primary motivation today. By attending this game he would be automatically elevated to the ranks of “hardcore” due to the unwritten code of football supporting. Talking of club names, the story behind Lincoln’s is a peach. Originally called Lincoln Amateurs, they signed a former Nottingham Forest professional in 1951, meaning they couldn’t keep their name. So the players had, according to the club’s own story, a “brainstorming” session in a pub in Sleaford and came up with the name United. The film rights to that story must have them queuing round the block at their Ashby Avenue ground. Like Goole AFC, Lincoln United’s honours roster is modest to say the least. But that’s not to say they couldn’t serve up some silky football to warm up the hundred and fifty or so fans who had made the trip to the dockside. The exterior of the ground may have been stark but the welcome was warm. Pie, peas and mint sauce were the order of the day round these parts, perfect insulation against the hurricane that was blowing down the ground. Both teams would be fighting the elements as well as each other over the next 90 minutes. We took up our place opposite the main stand, still enthralled by the phallic structures behind the ground. Every 20 minutes or so a train passed by the ground, offering travellers a glimpse into the heart of grass roots football. Goole AFC 1 Lincoln United 1 – Victoria Pleasure Gardens – Thursday 1st January 2015 With two minutes left the celebrations from the home side were as if they’d won the cup rather than just equalised against a mid-table rival. The goal, scored by Billy Law was completely unexpected and against the run of play – simply because of the conditions. The wind, coupled with the open aspect of the ground had led to some almost comical passages of play, with the home keeper struggling to kick the ball forward at all, whilst at the other end, the bookies had stopped taking bets on the next goal scorer being the Lincoln goalie.

Both teams had started the game trying to keep the ball on the deck but the heavy conditions had made that problematic. Lincoln had set themselves up in an unusual 3-5-2 with the idea of getting their wing backs forward. Alas the wind blowing in their faces meant they spent most of the first half on their heels, trying to defend against lofted balls over their heads. Despite having the conditions in their favour, Goole struggled to trouble the away keeper Peet. Half-time and we were all square. Lincoln opened the scoring ten minutes into the second half, making a meal of a clear-cut chance before Matt Cotton nudged the ball over the line. They immediately went on the front foot, playing the elements well. Whilst they hit the post twice and were denied by some astute goal keeping, there was only a few moments of quality. It took them eighty minutes to realise that placed rather than power was the key to using the elements for shots on goal. 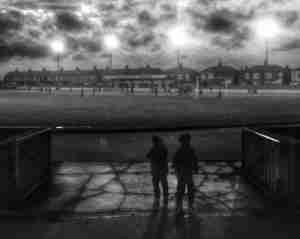 With time ticking away Goole tried to get the ball into the danger zone but were thwarted time and time again by the wind and a resolute defence. The post and Peet combined well to keep the ball out but they were powerless to prevent Law’s exquisite lob in the final minutes, timing it perfectly for a moment when the wind abated for a few seconds. Whilst they hadn’t used the favourable conditions to their advantage in the first period the goal was more than they deserved. Goole probably wouldn’t have been many people’s preferred destination on the first day of 2015 but we had no regrets. Twenty miles down the road Hull City were celebrating their first Premier League win in front of 22,000, many of whom would have come from the terraces around the Victoria Pleasure Grounds. But were they really happy with their £35 seats? A tenner had given us a friendly club, a decent game, pie and peas plus a golden goal ticket. That’s the heart and soul of football. Let’s hope that Goole can engage the local community and grow as a result. If not then my search engine idea might just do the trick.
Share
Tweet
Share
Pins
Share
Like