At the Cole Face

Share
Tweet
Share
Pins
Share
Like
Every Non-League team dreams of a run in the FA Cup. The chance to take on a Football (or even Premier) League side, the presence of national media around the club and the chance to bask in the limelight for a period of time. There will be few football fans outside of Exeter, and probably Runcorn, who won’t have enjoyed seeing Warrington Town humble Football League Two Exeter City live in the BBC last night. The media lapped it up. “Plucky little Warrington”, “Goal scored by plasterer Craig Robinson”, “part-timers” we’re all common phrases being bandied about as the game progressed. Nobody can begrudge the club their payday. The win over Exeter was their third consecutive 1-0 home victory in the competition, along the way beating teams in a higher division in each case including Conference North pre-season favourites North Ferriby United. The game was a 2,500 sell out and with the money from the BBC to televise the game, the club will have received over £50,000 getting to this stage of the competition. But is the money always a blessing for Non-League clubs? The big challenge Warrington face is to try to get some of those local fans back in two weeks time when they host Radcliffe Borough in the Evostik Premier League North match, and those league games beyond that. So far this season only around 150 come to Cantilever Park to watch games. A big cash injection is never a bad thing at this level but the challenge is to try and use it to encourage more fans to come back. Warrington’s challenge is three-fold. Firstly, they have to compete every Saturday with fans heading along the M62 to either Liverpool or Manchester to watch the Reds or the Blues.  One of the positive factors that televised football has brought the game is when some of the Premier League games are moved to a Sunday or Monday night, the local Non-League teams can try to take advantage of those fans who still want to go to a 3pm Saturday kick off.  This is one of the reasons why some clubs offer discounted entry for season ticket holders at bigger clubs, although in truth if you can afford the £700 plus ticket at Old Trafford or Anfield you are hardly likely to grumble at paying the tenner to get in at Cantilever Park. Secondly, they are located in an overcrowded area of Non-League clubs of similar sizes.  Within a twenty-minute drive there are over a dozen teams playing at the same level or just above Warrington.  It is rare that Non-League leopards change their spots and so they will be fighting a losing battle trying to win these fans hearts and minds. Finally they have the biggest challenge.  Warrington is a Rugby League town, home of the The Wolves, one of the most successful modern era clubs who play in the 15,000 Halliwell Jones Stadium in the town.  They tend to be very different sets of fans despite the fact that there is only an overlap of the two respective seasons for a couple of months each year. Unfortunately, it is not always the case that Non-League clubs who benefit from a great FA Cup run can translate that into ongoing success in the league.  The last headline club who did Non-League football proud in the FA Cup was Hastings United back in 2012/13.  They reached the third round, finally losing to Middlesbrough at The Riverside in front of 12,500 fans.  However, the cup run was to be the club’s undoing in the league as the fixture pile up caused by playing the FA Cup games and subsequent bad weather meant that they had to play 13 league games in just 28 days.  With the transfer window for Non-League clubs closed, and league officials who had enjoyed riding on the coat-tails of the club’s success now cocking a deaf ear, Hastings buckled under the sheer weight of pressure and were relegated.  Two seasons on and they have still not returned. 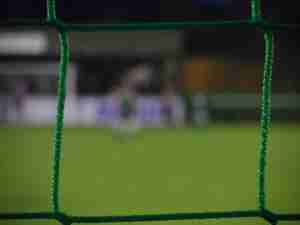 Forty years ago the Non-League team to hit the FA Cup headlines was Leatherhead FC who made it all the way to the Fourth Round, where they lost 3-2 to Leicester City at Filbert Street in front of the Match of the Day cameras.  Along the way they beat Colchester United and Brighton & Hove Albion, and were leading The Foxes 2-0.  Back then, when football wasn’t a 24 hours 7 day a week “in your face” event, the heroics of that Isthmian League side was headline stuff. Today, Leatherhead are back in the same division as they were in 1974.  They enjoyed some more of the limelight in 1978 when they reached Wembley in the FA Trophy final, losing to Altrincham but since then they have floated around the Isthmian leagues without being able to climb any higher.  As with most of the cases of the “giant killers”, the revenue earned from the cup run didn’t lead to success on the field.  Twenty five years after their cup exploits the club came close to folding, only saved by the actions of a group of fans who once again proved that Fan Ownership is the only real sustainable model for Non-League clubs. Talking of Fan Ownership, who were Leatherhead’s visitors today? None other than the mighty Rooks, who were on their best run of form so far this season, coming off the back of two consecutive wins.  We haven’t had a lot to shout about this season down at The Dripping Pan but things are changing.  A new formation, some inspirational experienced players coming back into the team and fans who were behind the management 100% meant that we arrived in the rain at The Tanners with strutting confidence. Leatherhead 0 Lewes 1 – Fetcham Grove – Saturday 8th November 2014 We came, we saw and we got very very wet.  In front of the biggest away support so far this season the Rooks put on the kind of battling display that had been missing for so long in 2014.  A change to 3-5-2 prior to the Met Police game worked wonders at the Dripping Pan but here it appeared to be ineffective in the first half against a confident Leatherhead team who passed the ball around well.  The Tanners looked to stretch the game, trying to nullify the threat of Sam one and Sam two as our flying wing backs.  The home side hit the inside of the post after twenty minutes which seemed to shake the Rooks into life and from that moment they never looked back. 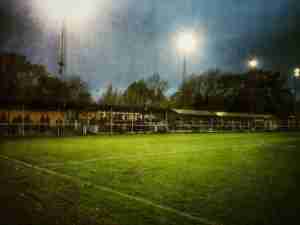 Some comedy rolling around on the floor by the Leatherhead players did the job of conning the referee, who wasn’t helped by inept performances by his assistants who couldn’t have been anymore unhelpful in letting the game flow.  Petty, niggly free-kicks sucked the life out of the game in the first half.  Perhaps I was just in a bad mood as I had dropped my chips on the floor. 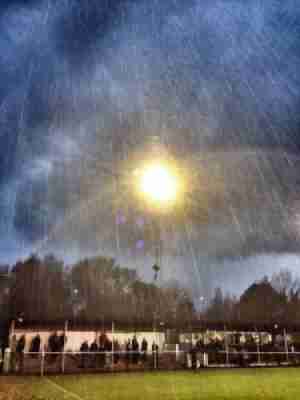 As the second half started, so did the rain.  When it passed from torrential to monsoon setting, most of the 40-strong Lewes fans headed for the covered terrace, leaving the hardcore LLF on behind the goal.  Our dedication was rewarded on the hour mark when Sam 1 (Crabb) beat his man on the right, crossed to the penalty spot where Sam 2 (Cole) met the ball on the volley and gave Louis Wells absolutely no chance. Lewes started to take control of the game and always looked the more dangerous side, although some superb defending from Rowe, Elphick and Banks ensured that the Rooks goal went unbreached for another game.  The final whistle was greeted with fist pumps, back slaps and even a hug or two.  In the grand scheme of things it was only 3 points, but for Lewes it was another step towards redemption. Forty years is literally a lifetime in football.  Whilst both sets of fans looked on enviously at East Thurrock United’s result at Hartlepool United in the FA Cup, we knew that our time will come once again.  For now, it was all about the magic of the Isthmian League.  Cup football is so over rated anyway….
Share
Tweet
Share
Pins
Share
Like

Wenger on his future, Sanchez and Ozil

Arsene Wenger has told reporters in his Manchester City pre-match press-conference that he believes both Alexis Sanchez and Mesut Ozil would like to stay at Arsenal. Sanchez wa...