Playing away in Dreamland 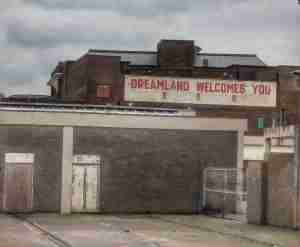 “Well I’ve been working hard to reach me sales target To earn a few quid for an away trip down to Margate I’m gonna blow my commission tomorrow on all me football family We catch the train at eight so don’t be late, were off to see the sea” We are the luckiest fans alive today. Who else wouldn’t want to be spending a day at the sunny British seaside today. It is fair to say that prior to the release of the fixtures back in July, Margate away in either the earlier part of the season or towards the end would have been perfect.  In the last two season we had been down to the Isle of Thanet in October and January, so it was time that the fixture computer was kind to us. What better way to celebrate our promotion than a knees up on the golden sands and sewage outflow pipe of the Costa del Thanet. Well, as our big sweaty transatlantic friend still warbles, two out of three ain’t bad. We were going to get our day in the sun in April at Margate, and ‘that’ sign was still warning us about staying away from the pipe carrying ‘stuff’ into the sea, but alas there was to be no promotion party. In fact our recent, and by recent I mean the last half of the season, has been a bit of a mystery. With a third of the season gone we were one place and two points outside the playoffs. However, the harsh weather, which first kicked in in October for us seemed to throw a spanner in the works and since then we have taken on average a point a game. I still get the “sack the board” chants aimed in my general direction by those who still don’t quite get this community club aspect and realise that I can’t be sacked by the fans (voted out in October, indeed) but we will finish the season in a stronger position both on and off the field than last season and can look forward to next season when the regeneration project will commence on The Dripping Pan which will ultimately give us a new viable revenue stream. 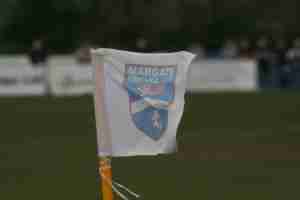 Our hosts today will also be looking forward to next season. Next chairman Bob Laslett has already shown his intentions by bringing former AFC Wimbledon manager Terry Brown. Rumours of weekly budgets in excess of £5k will certainly make them the favourites come August, but I hope the club don’t go down the all too familiar road of Non-League boom and bust. Whilst the ambition for the owners may be a rise up the leagues, it has to be sustainable. Redevelopment work continues at Hartsdown Park and that will give them a solid base, but if they do “build it” who will come? Only twice this season has the attendance at home broken the 500 barrier and both of those were due to the sizeable away support of Dulwich and Maidstone. Success on the pitch will bring people through the gate – in their one season in the Conference Premier where they played in Margate (as opposed to the two seasons in Dover) they did get over 1,100 on average, fuelled by away fans making a new ground visit. Today that number has decreased by 66%. With three other Ryman teams almost on their doorstep, plus Gillingham and Dover playing at higher levels close by, it is hard to see where these new supporter will come from. “Along the promenade we spend some money And Cynical finds a spot on the beach that’s simply sunny Big Deaksy will enjoy himself digging up the sand, collecting stones and winkle shells to take back home to Dan” But today is all about a bloody good day out.  With our final away game on Easter Monday at Harrow Borough not really ticking all of the boxes for a “Jolly Boys Outing”, today was all about a few beers, some sunshine, dare say a couple of giggles and if we were lucky, a Non-League dog or two. Heck, even a long overdue three points would be as good as a Kiss Me Quick hat, a lick of a lolly and memories of the Radio 1 roadshows down here as teenagers….happy days. It is fair to say that the walk from Margate station to the town centre has seen better days.  It is a crying shame to see so many places that I remember as a kid boarded up.  Dreamland, still home to bits of the UK’s oldest rollercoaster stands desolate, like a Scooby Doo spooky location.  There has been years of talk about turning it into an interactive museum of the rollercoaster but that day seems along way off.

Thanks to ClubSec Kev’s inside knowledge we bypassed the Pound shops and arrived at The Lifeboat pub, possibly the best secret in the town with its range of over 20 local ales. Lunch consisted of a few pints from the Westerham and Whitstable Breweries, sharing our memories of what we had been doing on the 15th April 1989, the day of the Hillsborough disaster which every club would be respecting today. Margate 1 Lewes 1 – Hartsdown Park – Saturday 12th April 2014 One taxi ride later and we were at Hartsdown Park.  You can see signs of the foundations being laid for the redevelopment and I’d hope they retain the existing structure at the Hartsdown Road, although essentially it is only a two-sided stadium with nothing at the far end bar the railing around the pitch and portakabins on the right hand side. The minute’s silence was impeccably observed and it was fair to say that reflective atmosphere was adopted by Lewes in the first half as they struggled to make any impact at all on the game.  They lacked fight, bite, bustle, hustle and thrust.  Margate, with their megabucks budget didn’t really dominate, although they forced over ten corners yet really made little chances in the opening period.  In fact their opening goal came direct from a Sunday League style mistake by Malins who perfected an air shot when trying to clear and 31-club (THIRTY ONE!) Jefferson Louis made no mistake from ten yards. 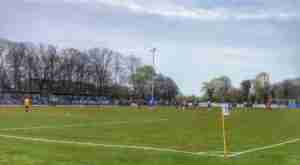 Lewes were forced to shuffle the pack once again with an injury to Andy Pearson meaning midfielder Logan had to drop to centre-back and Jack Dixon coming on. Sometimes such events turn games and this is exactly what happened in the second half.  Lewes started to believe that they could get something from the game and pushed forward, using Crabb and Wheeler out wide.  In the 65th minute the ball found its way to Wheeler on the edge of the box, he shimmied, twisted, turned and dropped his shoulder to confuse the defender, putting him on his arse and then slotting home. 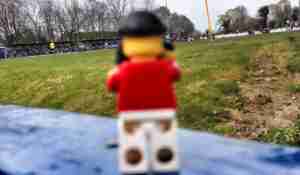 Margate were rattled and Cynical Dave smelt victory and told the Margate keeper and centre-backs so.  A few minutes later a miss hit shot from Dixon/Malins/Crabb (we can’t remember who exactly) bounced up on the hard surface and into the net.  Referee gave the goal but the linesman deemed the retreating Nathan Crabb and Luke Blewden in an “active” offside position despite no appeals from the Margate team.  Even the keeper agreed it was a harsh decision. A point apiece was probably a fair result for a game of two halves.  The Lewes Lunatic Fringe partied like it was 1999 on the way back to the station.  It had been a great away day and our reward was a family size bag of imitation Frazzles and a few bottles of Pedigree whilst we reminisced about the season.  Days out like this make the wind, rain, snow, sleet, floodlight failures, abject defending and poor refereeing decisions all worth it. “Down to Margate, you can keep the Costa Brava, I’m telling ya mate I’d rather have a day down Margate with all me Lewes family”

About York Road York Road has been the home ground of Maidenhead United F.C. since 1871 and is acknowledged by the FA to be the oldest continuously-used senior association football groun...