Share
Tweet
Share
Pins
Share
Like
It’s a glamorous life sometimes.  Commonwealth Games one week, the luxury of being a guest in an executive box at the Schalke Cup, a visit to see the New York Cosmos and then hobnobbing with the world’s press fawning over Gareth Bale in the Super Cup final. Hard life, some may say.  But I’d swap it all for a bit of Non-League action.  Well, maybe not all of it. 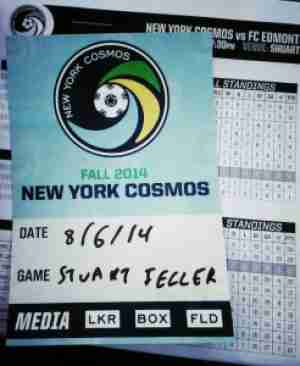 So sandwiched between the MetLife Stadium, New Jersey and the Cardiff City Stadium, in er Cardiff, is a trip to the Village Glass Stadium, Witham.  I can imagine your thoughts are racing, heartbeat speeding up and a few more butterflies fluttering in your stomach. Or is it just me. The new Ryman Premier League season is upon us once more and The Mighty Rooks are on the road on day one, travelling down the A12 to visit newly promoted Witham.  Let’s get the main fact about ‘The Town’ out of the way early shall we? Olly Murs once graced the turf here in his pre-billy big balls days.  Few Non-League teams can boast an X-Factor runner-up as one of their old boys but that’s no excuse for playing his songs as part of the pre-match entertainment. That would just be cruel on us visitors.  Just like those 100,000 Chelsea fans who were all in the Allianz Arena two years ago when they won the Champions League, thousands of Murs fans saw him make his September against Waltham Abbey six years ago and double that witnessed his one and only goal for the club a week later at Potters Bar Town. Perhaps one day there will be a Louis Tomlinson-style take over the club (or not)? Stranger things have happened. After a shaky couple of pre-season results, the Rooks new-look team began to gel, earning very credible draws against big sides like Eastbourne Borough and Charlton Athletic. Oh, and Whitehawk.  However, the side that would take the field today against Witham would look very different due to injuries to key players like Jack Walder, still getting back to full fitness after his horrific injury at Thamesmead in March, and the impressive Henry Muggeridge.  Also missing in the centre of the park would be the suspended Jack Dixon.  Still we always had Fraser Logan as cover there….except judging by his Instagram snaps, Fraser was a few hundred miles away in a sunny beach with his family. That is of course unless it was Clacton-On-Sea rather than Kos.  We were also going to be missing our physio Natalie who chose to get married instead of working at our game last week at Eastbourne. Priorities, eh! 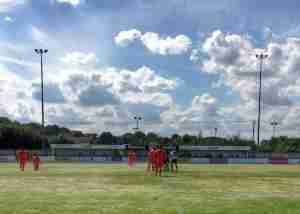 This is the best Saturday of the year in Non-League calendar.  All of the hopes and dreams of a record-breaking season are still alive at 2.59pm – longer in a number of cases.  The sun is shining, the banter is fresh, we can excuse a bad pass or two and even Terry’s jokes are bearable.  We all know that it will never last and soon we will be caught up in a spiral of frustration as our dreams, in the words of many a West Ham fan, “fade and die”. My long journey to Essex started at midnight when I boarded a flight from JFK to Heathrow.  Six hours later and I was kissing the tarmac in London.  If only our transport network was so efficient.  Three hours, FIVE trains later and I was back at TBIR Towers.  A short re-introduction to the family and I was back in the car, this time re-acquainting myself with the M25 as it crawled at 10 miles per hour north. When I eventually arrived at the, deep breath, Village Glass Stadium, I had spent six hours travelling since landing early.  But I’m sure come 5pm it would all be worth it. Witham Town 1 Lewes 1 – The Village Glass Stadium – Saturday 9th August 2014 You can look at this result in one of two ways.  Any draw away from home when the conditions aren’t suited to your style of play and you have a number of key players missing, is a good result.  Alternatively, you can look at the balance of play and the fact you had the best chances and go away disappointed.  On the whole I would say that our view moved from the latter at full time to the former on the long journey home a view shared by the Lewes Manager, Garry Wilson twenty minutes after the final whistle. We all gathered in hope behind the goal as the Lewes team, wearing their new “bright” kit that brought Barcelona so much luck a few seasons ago.  The pitch, to coin a James Boyes, was like a “deep shagpile carpet made of straw”, seeming to be suffering from the effects of the sun so early in the season. Lewes had managed to extract Fraser Logan from a bar in Kardamena at 3am and he anchored the midfield, allowing the new strike force of Blewden and Dodd to run the two centre-backs ragged in the first twenty minutes.  Both defenders were yellow carded for heavy tackles in the first half an hour, one of which forced Ross Treleaven out of the game, adding more woes to our midfield situation. Lewes started well, using Wheeler on the wing to get behind the defence and putting the balls into the box for Dodd and Blewden although their efforts were well saved by the Witham keeper, who was firmly in the banter bracket, enjoying giving as good as he got with the travelling fans.  Nothing nasty, all good-hearted and of course he was clapped off the pitch by us all at the end of the game. 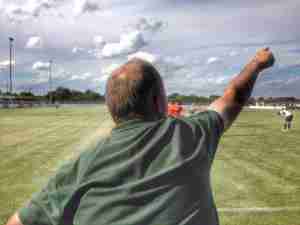 The club had recently had the bad news of the death of their chairman and he would have been proud to see how resolutely they played in the remainder of the half.  The home side should really have scored themselves when Ryan Blackman blazed over the bar from eight yards out with the goal at his mercy. After a swift slice of cake, served with a cheeky smile by the ladies in the boardroom we were back at it.  Finally Lewes broke the deadlock when Dodd’s effort was blocked and strike-partner Blewden smashed it home from close range.  Alas, the lead just lasted seven minutes when Banks hesitated and Godbold headed home.  Witham were now holding their own, looking dangerous when they came forward and being cheered on by the hundred or so home fans. The drama was over though.  As the clock ticked towards the 90th minute a high ball over the top of the Witham defence saw Nathan Crabb get in from of Ruel who appeared to deliberately run into the Lewes forward felling him in the penalty area.  The Witham defender, using every trick in the book stayed down until the referee stopped play as Lewes were preparing another assault on the Town goal. That was the last chance.  The Rooks had to make do with a point, coming away from Essex with another injury that will hamper team selection for the two games coming in the next week against AFC Hornchurch and Billericay Town, two sides who tend to play on the physical side.  But football is BACK.  Who cares about traffic jams, delayed trains and bobbly pitches.  The season is well and truly underway once again.
Share
Tweet
Share
Pins
Share
Like

About Ewen Fields Ewen Fields is made up of 5 stands: the Main Stand, the Scrattin Shed, the Tinker’s Passage end, the Leigh Street stand and the Walker Lane end. All of the stands are c...