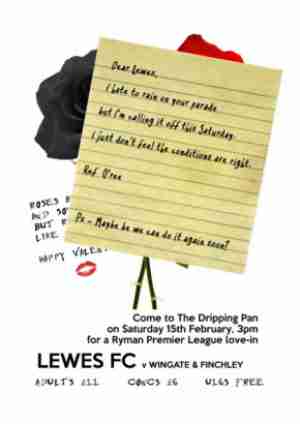 It’s Saturday and of course that means there isn’t a game for Lewes.  It actually could be any day of the week at the moment and the game wouldn’t be on.  The rules state that we actually had to wait until Friday to officially call the game off, although the persistent rain during the last week had left a lake the size of the a swimming pool across the pitch. The latest postponement, the fifth in succession, means that the club have played just two games at the aptly named Dripping Pan since November.  Somehow, somewhere we have to fit in nine games that have now been postponed.  Lewes aren’t the worst hit team by any means – Grays Athletic have played four games less than us and are still in the Ryman League Cup. The debate over 3G continues to rage with over 550 games now postponed in the Ryman League.  Whilst all of the clubs (bar Maidstone United and Harlow Town) are trying to think of ways to recover the revenues that they have lost, the Ryman League sit silently, waiting for someone to do something.  The one thing that is certain is that next season they will have to act differently. 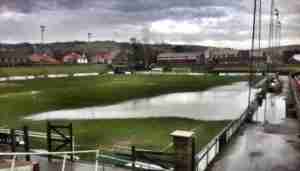 Most clubs and their fans expressed concern about the decision to increase the league size from 22 to 24 teams last year.  Winter’s have been harsh in the Non-Leagues in recent times, resulting in some huge fixture pile ups which devalue the whole point of playing a league over nine months.  The answer?  Well, we could opt out of the Ryman League Cup if we wanted – hardly a compromise in most club’s eyes.  Surely the most logical option would have been to start the season a week earlier (as the Football League did) or even extending the season into May (as the Football League do).  Common sense? My Saturday mornings recently had taken on a similar theme.  Draw up a list of potential games to go to, watch them all slowly fail pitch inspections via Twitter and then at 2pm scramble around for a game to go to.  These days it’s not just about watching a game for a game’s sake (cue corporate line here for the sake of the Current Mrs Fuller), I had the opportunity to do some secret scouting on one of our forthcoming opponents.  With three of them managing to have a game within half an hour of TBIR Towers I had my afternoon mapped out.  The lucky winners were Thamesmead Town who were hosting high-flying Wealdstone. 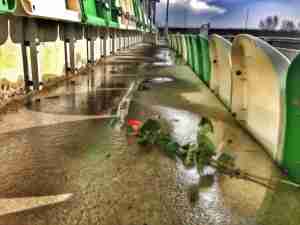 Romance was still in the air when I arrived at Bayliss Avenue.  The club was handing out roses to any ladies coming through the turnstiles to mark Valentine’s Day.  The club have made massive strides in recent years, converting the basic ground into a real community facility.  The installation of their 3G pitch adjacent to the ground has given them an ongoing revenue source.  In harsh times like these, many clubs in the lower steps of the Non-League structure in Kent have been using the facilities here to play their games.  No irony here at all that clubs with fewer resources are the ones who have the means (and are allowed) to continue to play their games.  Despite having the facilities at their ground, Thamesmead Town aren’t allowed to use the pitch for themselves if the main pitch is unplayable. Wealdstone were the visitors, almost doubling the average attendance at Bayliss Avenue and boosting the takings over the bar.  You cannot fault their loyalty to following the Stones away from home, with well over a hundred fans making their first visit to Thamesmead to see whether they could make up ground on the top two, Dulwich Hamlet and Maidstone United. 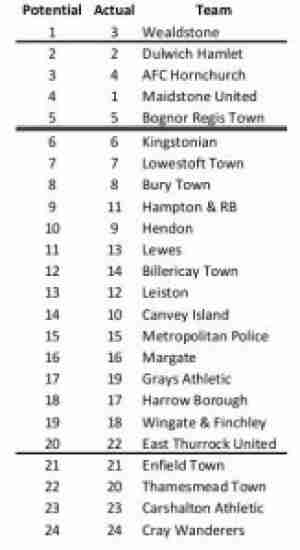 With so many teams having played different numbers of games, it is hard to really see what the true league positions should be.  Lewes had dropped down the table from 7th in late November to 12th before this game, both as a result of a serious lack of games, but also due to drawing six of the eight games in that period.  So what would the real league table look like if we had been able to play all of the scheduled games?  Well thanks to my complex financial modelling I can now exclusively reveal what the true Ryman League table would look like. So the visitors would be sitting pretty at the top if all things were equal.  But we know that football isn’t that predictable, otherwise my weekly accumulator would see me dine on Filet Steak and drinking Adnam’s Ghost Ship every week. Thamesmead Town 0 Wealdstone 2 – Bayliss Avenue – Saturday 15th February 2014 Prior to kick off, Thamesmead manager Keith Mahon was recognised for the performance of the month for January with regard to Mead’s fantastic 4-1 victory over league leaders Maidstone United.  Any hopes of a repeat performance over another Stones team dissolved within 90 seconds of kick off in the bright sunshine when James Hammond overlapped down the right hand side, whipped his cross in and Michael Malcolm swept the ball into the net.  The romance was dead. 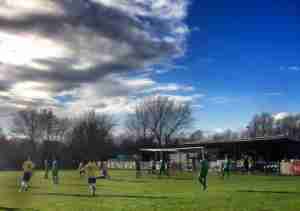 In truth this was a walk in the sunshine for Wealdstone who were rarely troubled.  Thamesmead got stronger as the game progressed, playing the ball around midfield well although without any threat up front, the Wealdstone centre-backs had an easy afternoon.  At half-time Bartlett saw a weakness in the Thamesmead backline (he must have been reading my notes) and changed the 4-3-2-1 to a more traditional 4-4-2 with Malcolm pushed in from a wide position to play alongside McGleish up front.  Sorry, tactical analysis over. Fifteen minutes into the second period Wealdstone were awarded a penalty.  No real complaints on the decision, although the referee had let worse challenges go at the other end of the pitch and so you could understand the frustration of the Thamesmead bench.  Cronin stepped up and smashed the ball home to double the lead. Full-time saw the Stones fans celebrate a decent win.  Their afternoon was made all the more sweeter by defeats for Kingstonian, Dulwich Hamlet and Maidstone United. It’s still not clear what the situation with Maidstone United is in terms of whether they will be allowed to even take part in the Play-offs but with wins for AFC Hornchurch and the form of Bognor Regis Town with seven wins out of their last eight games it may not yet be a done-deal.  Perhaps romance isn’t quite dead, although it may take the creative brain of Shelley, Byron or Audley to find a story that sees Thamesmead avoiding the drop at the end of the season.
Share
Tweet
Share
Pins
Share
Like

Arsenal are preparing to enter a bidding war with German outfit Borussia Dortmund for the signature of Marseille’s youngster Christopher Rocchia, the Sun reports. The 19-year-...