I don’t care about the truth, I want some happiness

Share
Tweet
Share
Pins
Share
Like
Take one look at the teams who enter the early rounds of the FA Cup and you cannot fail to be overwhelmed by a sense of a purer age of football.  Teams like Ramsbottom United, Blaby Whetstone, Bristol Manor Farm and Jarrow Roofing will be hoping by 5pm today that they are in the hat for the next round, with a cheque for £4,500 in their back pockets. Their road to Wembley will undoubtably be over long before fans of the professional clubs have even realised this year’s competition has started. Less than 2% of the teams who start in the Extra Preliminary round in early August will kick off in the Final Qualifying Rounds in October.  But that doesn’t stop us Non-League fans dreaming that this year will be our year where we reach the stage when the League teams come into the competition. 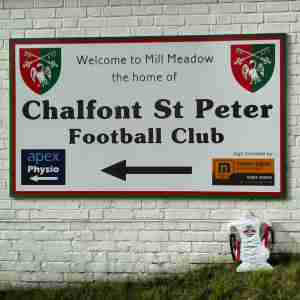 One hundred years ago the FA Cup was just as special as it is today, although in those days it was simply “The Cup” with no added sponsorship tag or TV company intervention.  The cup started in early September 1913 and went through seven rounds of qualifying before twelve Non-League teams took their place in the first round proper in January 1914.  Those names back in the day hardly rolled off the tongue, but today they are actually playing at the highest level.  Premier League sides West Ham United, Southampton and Crystal Palace.  SkyBet Championship sides Reading, Millwall and Brighton & Hove Albion.  One day, when the DeLorean’s final go into production we can travel forward to 2113 when Lewes put out a weakened team in the FA Cup because of the forthcoming Champions League tie with Spain champions Carabanchel. But back to today.  The Lewes unbeaten bandwagon was rolling into Buckinghamshire for the FA Cup Second Qualifying Round to take on Chalfont St Peter FC, giant killers of the Met Police in the previous round.  The village, once home to Margaret Rutherford and Private James “We’re doomed” Frazer (from Dad’s Army), doesn’t appear on many tourist or footballing maps.  The Greyhound Inn, was once a local hanging court, and that spooked Terry, so we headed for the White Hart, armed with free beer vouchers that had been downloaded on the inter-web.  Who said football fans were fickle?  Alas, a few of the fans were still stuck in a traffic jam on the M25 as we headed into Mill Meadow. Last season the Saints caused a few waves in the FA Cup by beating Carshalton Athletic before losing in a replay to Bishop Stortford.  However, the current trend was not the friend for the home side coming into the game.  One draw and five league defeats in the last six for the Saints coupled with a league place just above the relegation zone put the odds firmly in favour of the Rooks with their unbeaten start to the season.  However, the last week had been costly for Lewes with two of the Crabb brothers leaving the pitch against Wealdstone on Monday on stretchers and both likely to be out for a while. 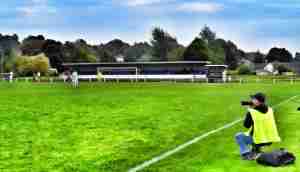 Thirteen years ago when the The Saints were in the Isthmian League they traveled to The Dripping Pan for a normal league game.  At the time The Rooks were on their way up the Non League structure and were on fire on the traditional Bonfire Night game, running in 13 goals to inflict the record defeat on Chalfont St Peter.  Such results are incredible rare in football, but there was no cause for chance in the run up to the game with Saints boss Danny Edwards trying to bolster the squad by resigning Lewis Cumber.  However, in one of those ridiculous non-league situations, he may not be available for the game as his international clearance from the New Zealand FA, where he had been playing, hadn’t been received by fax.  Still, he had Scott Fitzgerald to call upon. who is probably better known for his writing exploits rather than his Non-League scoring.  He famously said:- “Never confuse a single defeat with a final defeat” Mill Meadow was all set up for a monumental battle. The pitch looked in perfect condition, the LLF were well lubricated and even the chaps from the Real FA Cup had put in an appearance.  The sixty or so Lewes fans had been joined by the injured Sam and Nathan Crabb as well as the suspended Jack Walder.  What could possibly go wrong? Chalfont St Peter 0 Lewes 1 – Mill Meadow – Saturday 28th September 2013 Some may have come with the hope of a giant killing but Dan Smith’s goal after just 90 seconds was enough to put the Rooks into the pot on Monday along with the £4,500 prize money.  Despite the solitary goal, Lewes rarely looked troubled and should have gone on to score more goals.  With injuries and suspensions decimating the squad, Garry Wilson was forced to reshuffle his side, utilising Steve Brinkhurst at full back and playing Dan Smith up front on his own.  This was Lewes’s 13th game in just six weeks and the fatigue was all to clear to see, especially on a surface that looked as if it hadn’t been cut in a few weeks. 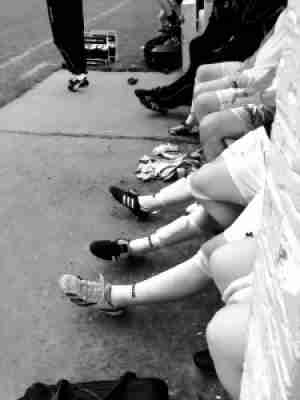 Few of the Rooks fans had made their way behind the goal before a Jack Dixon through ball saw Dan Smith outpace the defender, take the ball around the Chalfont keeper and slot home.  Would the floodgates open?  Alas no.  This was a game of solid defences and it was a surprise that the home side didn’t put the Lewes game under pressure.  Even with ex-England Coach, and El-Tel’s best mate, Terry Buxton on the bench, the Saints couldn’t find a way through one of the meanest Non-League defences in the country at the moment. Despite having the famous Scott Fitzgerald on the bench, Chalfont made their substitutions to little effect in the second period.  Lewes pushed forward and created a few chances but it was obvious to see that this was a game the team simply wanted to be over.  The FA Cup is all about the result and not the performance….and the prize money.  So when the final whistle sounded there was probably more relief than joy from the fans and players alike.  All we could have asked for today was a win and once again this special team had delivered. As the more famous Scott Fitzgerald would have said if he would have been in Mill Meadow this afternoon, “Our lives are defined by opportunities.  Even the ones we miss.”
Share
Tweet
Share
Pins
Share
Like