Share
Tweet
Share
Pins
Share
Like
A few weeks ago I made a throw-away statement about not going to football every Saturday to CMF.  “Just once, wouldn’t it be nice to spend a normal Saturday together as a family?” She asked me.  I did point out that we were only 6 weeks into the new season but then she came back with some statement about watching football every week in Sweden and pre-season friendlies.  I mean, who counts them?  Well, apparently she did.

Of course I blame Danny Last.  If it wasn’t for him I wouldn’t be leaving TBIR Towers at 3.45am tomorrow, heading to Heathrow for a flight to Madrid where Mr Last would be waiting to whisk me to the Bernabau for Gareth Bale’s home debut.  AND that meant I could go to a game today.  But I hadn’t figured on the mighty Rooks still being unbeaten after 10 games.  I simply had to go to Wingate & Finchley.  I put my case forward, adding in that neither James Boyes (photos) nor Tom Harper (words) would be present to record the game for prosperity.  There was a chink in her armour.  But in order to satisfy a peace accord that Kofi Annan would have been proud of, I had to fit a new oven. A few weeks ago when I was flush with the annual bonus I bought a new oven.  All mods and cons, bells and whistles.  It has been sitting in a box in the garage ever since.  To tell you the truth anything that requires electrical work scares me after an incident a few years ago (read about it here).  Reading instructions on the t’internet it suggested I would need to hard wire the damn thing into the wall, on a separate circuit with a 13amp fuse.  What’s wrong with simply plugging it into a socket?  So the deal was – if I could install the oven by 12.30pm I would be free to make my way around the A406 to the Harry Abrahams Stadium. 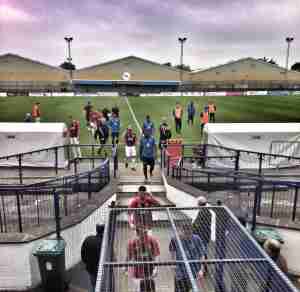 It took me 15 minutes to realise the old oven was screwed in place – this was after I had declared it was stuck in place with Superglue. I didn’t realise but CMF did.  A great start.  But then miracle of miracles, the old one slid out, revealing a plug and a socket.  Could it really be this simple?  Apparently so.  Within ten minutes it was replaced, although I stayed in the kitchen for an additional hour, occasionally swearing as if in frustration to make it sound as if I was working hard.  Just a small white lie surely? So today, the Harry Abraham Stadium, Finchley, tomorrow the Estadio Santiago Bernabau.  Nicky Wheeler or Gareth Bale? Matt Crabb or Cristiano Ronaldo?  Jack Walder or Xavi Alonso? No contest really. Wingate & Finchley 1 Lewes 3 – The Harry Abrahams Stadium – Saturday 21st September 2013 Ten league games into the season and Lewes are still unbeaten.  Our record on the road this season is three wins, two draws and just two goals conceded.  Yet if the season was to end today we would still be outside the play-offs.  For the first time in three seasons it is simply too tight to call at the top. Just two points separate Wealdstone in pole position with Lewes in 6th.  The two unbeaten titans will meet on Monday night with more than pride to play for. For fifty minutes today Lewes were lethargic.  I could say poor, but that isn’t fair on the side who have so far played 11 games in just six weeks.  The squad, whilst gelling nicely, is still small and so it is asking a lot for the players to put in performances week in, week out.  The first half really passed  us me by as I sat in the iconic art-deco stand chatting with Club-Sec Kev with a fine pint of Timothy Taylor beer.  Just as we were preparing ourselves for a visit to one of the most hospitable boardrooms in the Non-Leagues for our half-time chocolate biscuits, Jack Walder lost control of the ball and within seconds the ball was in the back of the net as McCall swept the ball over Banks into the back of the Lewes net.  Bugger.

Just like last week at Peacehaven, Messrs Wilson and Bloor earned their bacon with an inspirational half-time team-talk, sending the team out with fire in their bellies.  On fifty-five minutes Wheeler puts in Olorunda and he “dinks” (a collective vote on that one) the ball over the Wingate keeper and wheels away as the ball trundled (ditto on the vote) into an empty net, nestling (and a third) in the corner. One became two when Wheeler chased a lost cause, crossed the ball on the touch-line and Nathan Crabb headed home.  Cue funniest moment of the season so far as Cynical Dave gets over excited and somehow tumbles over the pitch wall.  He sheepishly picks himself up, and much to the amusement of us all, is handed back his Rizla papers by the Wingate keeper. A third follows soon after when Olorunda outjumps the keeper, causing some bizarre lengthy protests from the Wingate defenders.  Such ineffective handling of situations was a common theme in the game, and exemplified in the last-minute when one of the most reckless (and late) challenges by the Wingate number 14 floors Nathan Crabb no more than a metre from the linesman.  A melee (number four for the football cliché voting team) sees unnecessary involvement from a dozen or so players yet the offender gets a yellow.  A simple yellow.  Absolutely unbelievable.  Even the Wingate keeper, who in the banter stakes, got full marks for joining in all afternoon, could only laugh at the decision. But Crabb picked himself up, knowing that he would be needed to run his socks off again on Monday night.  Three points is all we could have asked for.  Oh, and some home-made spicy chicken noodle pasta.  That’s why we love coming here.  Three points and excellent hospitality .  What more could I ask for before heading off to Espana.  Hasta la victoria siempre
Share
Tweet
Share
Pins
Share
Like

The Galaticos welcomed third-tier Numancia as Real sought for team redemption after been held to a disheartening 2-2 draw away at Celta Vigo. Zinedine Zidane's selection w...