Sofa life is not all it’s cracked up to be

Share
Tweet
Share
Pins
Share
Like
Despite the fact we conceded two goals in 45 injury-time seconds against ten men on Saturday, Non League Day was once again a success. Our previous experience in hosting a game on NLD was four years ago when Hampton & Richmond Borough came to visit in our Conference South days. Seven hundred and eight eight fans saw the game on Saturday, the highest crowd in the Ryman Premier League this season (bar Maidstone United), up 48% on our last Saturday home game against Canvey Island. Across the Ryman Premier League every club who played at home on Saturday saw a rise in attendances from a normal Saturday. Hornchurch up by 50%, Bury Town up by 60% and even Cray Wanderers saw a 25% rise. 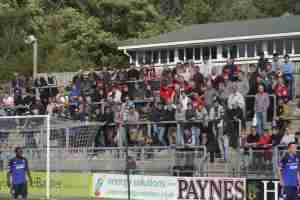 But Non League is for life and not just for one day when the Premier League players are on the piss in Marbella. So the big test would be how many fans would come back to games this week when the temptation of England’s latest borefest would be on the TV. Last season, the average attendance at the Pan was 542 and this year the first Tuesday game had seen 532 come through the gates, with the average already over 650. There isn’t much more we can do to get our message across in the media. Last week we saw the cameras from Sky Sports News come to the Pan to get an insight into how we have bounced back, in true Partridge-style, from the brink of Non-League extinction as well as the Guardian once again issuing a rally call to come and watch the Rooks. As one of my more media-savvy fans said to me over a few beers last Christmas, “For a club of your modest size, you get a fucking ridiculous amount of attention from the lovely-doveys, don’t you.” But grass-roots football is all about sustainability to steal the latest post-Olympic buzz word. To clubs like Lewes that means becoming a bigger part in the local community. That is where the fans of tomorrow will come from. Few football clubs really understand the need to recruit new fans these days. Encouraging young fans to come to games means that they will bring along their parent(s) and spend money over the bar and in the club shop. Make the entry point affordable, or even free as with the case for many clubs in the Non-Leagues, then slowly they will return time and time again. Football is in competition with other leisure activities on a Saturday afternoon yet some football clubs still simply see all fans, irrespective of age, as cash machines. The concept of affordabilty and value has simply never been considered by many clubs. 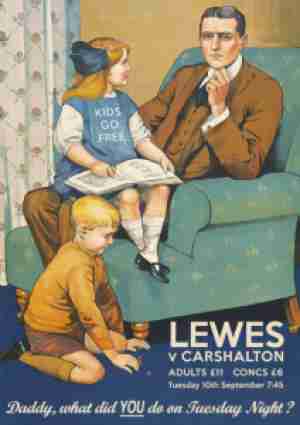 Affordable football should be the most important phrase adopted by all football cubs today. During the last ten years where we have experienced one of the worst ever squeezes on our personal finances, football at the top-level in England has got richer and richer. sickeningly richer. Whilst every penny in our pocket now means more to us, the top flight clubs have continued to push their ticket prices skywards. Today, tickets for most games are available to the general public, something that was incredibly rare. I understand the economics behind football these days. Gone are the days that people would invest in a professional football club out of life-long love or local community pride. Today it is all about the return on investment. Has England, or to be more precise, the Premier League, has become the victim of its own success? No…unless you consider that the victims are the supporters of tomorrow. Tonight around 350 fans would be choosing The Jungle at The Dripping Pan rather than their armchairs to watch their football, Rikki Banks instead of Lambert Jack Walder rather than Wiltshire in the centre of midfield and hopefully the return of Daniel Smith up front instead of Daniel Sturridge. Four hundred fans who would get value for money and hoepfully go home without feeling the need to ring up BBC 5Live or Talksport to rant about things that nobody really cares about. Things are still tight at the top of the Ryman Premier League table, and despite the Rooks run of four successive draws, they are still only five points off top spot in sixth place. On paper the game against Carshalton Athletic should be a banker home win. But we saw last season how difficult the Robins were to break down. A highly-entertaining 3-3 draw away at the start of the season was followed up by a very stormy 45 minutes at The Pan in February when the proverbial six-pointer saw Lewes race to a 2-0 and the Robins reduced to ten men all within the first twenty minutes. And then the lights went off. The re-arranged game saw Lewes take all three points in a hard-fought 1-0 win that almost sealed relegation for Carshalton. But of course the FA stepped in and the Robins were thrown a life-line due to the whole Thurrock farce that did nothing but tarnish the reputation of the grass-roots game. Unfortunately, once-bitten Carshalton Athletic were still in the danger zone at the bottom of the league. This season, the league had returned to four relegation places. Worrying times indeed for the Robins. Lewes 2 Carshalton Athletic 0 – The Dripping Pan – Tuesday 10th September 2010 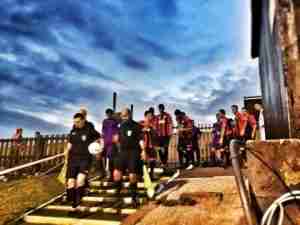 As I drove away from the Pan last night, all I heard on the radio was moaning England phones, talking about the boring performance.  Hello?  What did you expect from a) this current side b) the current situation and c) what they need to do to qualify.  I wrote earlier in this piece about it being a borefest and I wrote that bit 48 hours before the game.  Why did those fans bother?  With a pretty full non-league programme up and down the country, why didn’t they go and see a local side?  Just over 350 were in the Pan to see Lewes’ unbeaten start to the season stretch to 9 games, the best start to a season for over 6 years.  Whilst the quality was never of an international level, it was head and shoulders above the Kiev fayre in terms of passion, enthusiasm and commitment. The result was never in doubt after Jack Dixon scored his fourth goal of the season, smashing a loose ball home as early as the sixth minute.  Lewes looked lively in the first half with Walder at his best in the middle of the park, breaking up the visitors play and setting the attacking play under way.  It was a surprise that they couldn’t add to the tally before the break, and even let the visitors, in their very fetching purple kit with gold numbering, into the game. But normal service was restored after the break.  A quick counter-attack saw Nathan Crabb played in and he made no mistake from an acute angle.  Feed the Crabb(s) and they will score and do lots of summersaults to celebrate.  The cheer of the crowd brought those who were sitting in the bar out of their Hodgson-induced coma, raising their spirits for a brief moment before being sucked back in front of the TV. 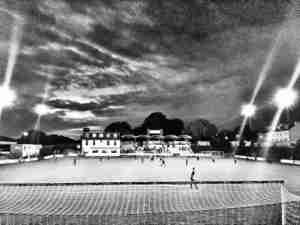 With the pain of Saturday’s two goal capitulation still fresh in our minds we urged the Rooks forwards.  Our hopes weren’t held when Ade Olarunda was sent off for “dangerous play” when his lunge at the ball was judged to be over the top.  The fact that a Carshalton player was some distance away only made the decision more laughable.  However, we came through the last 15 minutes unscathed and the final whistle was met with some relief. So England drew.  Great.  Well done England.  I still prefer my football these days a little more rustic, with a liberal dash of Harvey’s.
Share
Tweet
Share
Pins
Share
Like

Bayern Munich forward Robert Lewandowski has revealed  that he used to try and emulate his childhood idol Thierry Henry ahead of Wednesday’s Champions League clash against...