Share
Tweet
Share
Pins
Share
Like
“I just can’t look, it’s killing me.” Picture the scene. The time? 10:30pm CET The place? A train trundling through the lowlands of Holland, somewhere between Best and Utrecht. The reason? Work. The problem? Lewes are playing at home to Hampton & Richmond Borough. There are only a few minutes left, the score is 1-1 and I’ve just lost my 3G signal. The Rookmeister has left his nest and I am flapping helplessly in the wind, or as my very good friend Ben sitting opposite would say, “Sitting in the corner with your dick out”. I immediately tell him to correct himself – the Dutch are a liberal bunch but there are rules on these trains. The problem is that Lewes don’t have a very good record at hanging onto a point late in home games. Time after time we’ve all said a collective “bollocks” as a corner isn’t cleared and the ball is turned into the net. Another point dropped. In fact if we would have ended our games at the 85 minute mark in the past two seasons, we would probably be in the Football League now. Of course we would have. “Jealousy. Turning saints to the sea, turning through sick lullablies, turning choking on your alibi.” I’m jealous. Immensely jealous. I know I have another 3 or 4 hours of travelling and then work before I can call this ridiculous day over. Whilst I have had a fantastic dinner in one of Eindhoven’s best restaurant’s bought for me and now I’m heading to a hotel room where the toilet is in the middle of the room in a Tardis and with free “movies” I;d rather have been at the Pan, watching the first home game of a season of huge promise. I wanted to be standing on the Jungle, pint of Harvey’s in hand marvelling at the footballing revolution taking place on the hallowed turf. I wanted to see the paying public marvelling at our new creation, the Lewes matchday programme. “But it’s just the price I pay. Destiny is calling me. Opening up my eagle-eyes. I’m Mr. Brightside.” 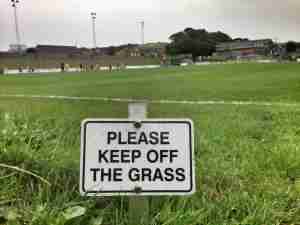 Dolly Parton once said you can’t have the rainbow without the rain, so my pennance is missing the game. From what I read on Twitter we were on top, but were up against some dogged Beavers and an official who liked being a man of mystery in terms of his decisions. Watching games unfold like this is horrible. Worst. Day. Ever. But that was then, and this is now. Saturday. Match day. And I was back in Lewes. Did it miss me? Of course not. 516 hearty souls saw the game on Tuesday night, just 5 supporters short of the best crowd of this round of games. Make no mistake, if this post isn’t full of enough clichés already, build it and they will come. The crowd was up by nearly 200 on the comparable first midweek fixture on last season. The campaign was one away win at Hornchurch old and already the locals were queueing around the block to see the Rooks. A lot has gone on behind the scenes recently to contribute to this. We’ve covered our new management team in previous weeks, their different approach, the squad of local players and the standards they want to set. At the board level, we now have clear roles. And not just one either. Good old Clive now wears the Treasurer/Commercial Manager/Coach Driver and Head of Catering Director’s hats all at the same time like an umpire on a cold day. Charlie is in charge of blue/red/purple sky thinking and poster design. Ed is in charge of crap music and regimented meeting agendas, whilst I have taken charge of the website and programme, along with the real brains in this area, Bazza Collins. Every other week we report back on progress of our actions as we move into a new phase of the club’s existence – solvency. 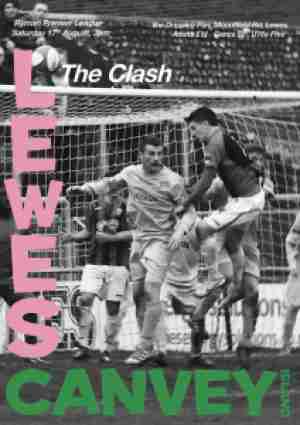 So for us chosen few it’s not just about tuning in for the game, and that is why I feel the pain of Mr Brightside from 160 miles (fact – as the crow flies, Amsterdam is the closest capital city to London) away. Still, with only 46 league games this season (with the predictable 2 month winter freeze/flood to factor in), games come thick and fast.  Just three days later I am back at the Pan, pint of Harveys in one hand, flapjack in the other. Canvey Island are today’s visitors. I’m sure they aren’t too impressed with a start of two defeats from two games. If pre-season betting odds were to be believed, they will be challenging us for the “midtable mediocrity” slot, although the same bookmaker had Thamesmead Town as joint favourites who so far have shipped nine goals in two games. Once upon a time kids the Gulls were flying high, in the Conference no less but just like the Rooks, it’s a very different ball game at the top of the Non League pyramid and either you have the resources to compete and not just survive. The Conference’s loss is of course the Ryman’s gain – you can’t fail to have a bad day out on The Island at any time of the year.  The Gulls are one of the teams we actually have a good record against.  There aren’t many in the past few years, although my Lewes definition of a good record is not losing 75% of our respective games.  In fact, in the past two seasons we have actually been unbeaten on our trips to the Costa del Canvey, raking up a total of 11 goals in our three wins and a draw.  Confidence is a defence mechanism against reality, as my 10 year old daughter would say. Lewes 1 Canvey Island 0 – The Dripping Pan – Saturday 17th August 2013 3:04pm and the ball was nestling in the back of the Canvey Island net. Less than 5 minutes gone.  Just enough time to walk to the Jungle and take our places before Jack Dixon smashed the ball home form 20 yards.  As if that wasn’t enough, the Red Arrows flew overhead.  We don’t do things by half here in Lewes you know. 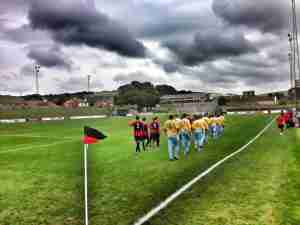 The game wont live up there in the greatest games in history.  Despite the fact it was mid-August, the weather was positively end of Octoberish.  Whilst Lewes always looked the most likely to score another, it wasn’t until Canvey were reduced to 10 men for an off the ball set of handbags that the Rooks threatened the Canvey goal.  Whilst they have only scored 3 goals in the opening 3 games, there are goals galore in this side.  The fact that the defence looked so strong, even with midfielder Jack Walder playing there today shows how far the team have come in such a short period of time. And of course there was the record-breaking performance of the Crabbs.  Not one, not two but three Crabb brothers started, and finished the game today.  I cannot remember any side ever fielding three brothers in the same starting XI. 532 saw the game today, the (joint) biggest crowd in the division, and almost treble that of our local Conference South team.  Feel-good football is back.
Share
Tweet
Share
Pins
Share
Like

History of Football: The Ancient Origins to Middle Age and the South American version

Surprise, football did not originate in England. The game has existed in many forms around the globe. This series of articles explores how football developed in the different eras and re...