Share
Tweet
Share
Pins
Share
Like
Great minds think alike, so they say.  So whilst I was half way through writing my final piece in this year’s series of Blueprints for the future of the non league game, in pops a suggestion fromJenni Silver, the Goddess of Gloucester City FC which couldn’t have matched my thoughts any better.   How much does it cost to run a non-league team? You could argue, with two Conference South teams entering administration last season and numerous others across the pyramid struggling for cash to pay their bills that perhaps it is beginning to cost too much. 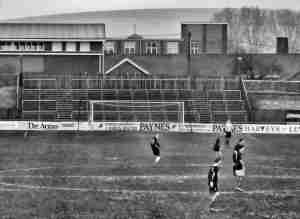 Despite the perpetual argument that there is no money in non-league it seems clubs are still spending wildly, rarely on infrastructure but usually on wages, which continue to rise against a backdrop of unsteady gate numbers, recession and supporter apathy which stalks the lower leagues. The haves and the have nots are growing further apart – one look at the Conference Premier shows some teams towards the top half of the table spending more on the wages of single players than some teams in the league below spend on their entire squad. Full time teams now exist in the Conference North and South yet some Step three teams can still turn players’ heads with an offer of an extra £20 or so a week than teams in the league above can afford. With financial fair play in non-league seemingly a long way off – as one conference official noted last season, the turkeys won’t be voting for Christmas any time soon – there must be an alternative which helps stabilise spending and provide a positive example to the next generation of players and fans. I will admit my Blueprint for Non-League is a bit “out there” but it is getting to the point where there needs to be a revolution – the top part of non-league is a mess, ex League clubs struggling to adjust, ambitious upstarts spending their way to the top and players commanding daft wages because they know the clubs will pay somehow and the chaos is filtering down to the lower leagues too. In short it is damaging the game. My idea for a shake-up could do away with some of this, it might even mean the end of the AGM cup and it all came about by thinking of a land far far away. On the other side of the world the A League, has evolved slowly over the past decade or so to become a sustainable, solid league attracting the likes of Alessandro Del Piero and er Emile Heskey. It has also bred a new generation of Socceroos and attracts thousands upon thousands of fans in a country where football is far from the being the national sport. It has grown to become something sustainable, something which promotes youth development and something which is popular and attractive to families – what non-league team wouldn’t kill for a slice of that? The A League has set rules which could be applied to the first three steps of non-league in a bid to damp down the flames of crazy spending and financial idiocy which burn through the leagues each season – yes it would be radical, but something’s got to give. Suggestion 1: A wage cap Let’s get the contentious bit out the way first. A wage cap would be a quick, although probably not an easy or popular way of controlling the spending. It links with the equally unpopular and as yet unenforced financial fair play rules which demand a club can only spend what it brings in in revenue and sponsorship but takes it one step further, a top level cap on wages. OK, the Football League doesn’t have a wage cap and the Premier League won’t be even thinking about the idea any time soon but that shouldn’t be a reason in itself for non-league to not consider it, especially when you have such a disparity across the pyramid. It seems a bit scary that there clubs in the Conference Premier spending more that some League Two clubs. Hard and fast figures for wages are notoriously hard to come by and most teams will argue that they pay their players a couple of bags of Quavers and a bottle of pop but players talk and if the figures I’ve heard are true, well I wish I was a non-league footballer! Imposing a wage cap alongside an A-League style squad quota (more of which later) would mean managers and clubs would be forced to spend wisely and include local players. The leagues could be evened out – no more Phoenix teams spending their way up the leagues, going pop and then repeating the process all over again. The teams with less money would still spend less but the big budget blowouts would be limited. Of course the players wouldn’t like it but capping wages could benefit clubs in the long term, attracting players who are value for money and who aren’t just chasing a wage. Interestingly the A League also has a set minimum wage for players, which might not work for part-time football but could easily be applied to the full-time clubs at the top of the pyramid. So, it’s a bit of radical thinking but bear with me, combined with a bit more wisdom from Oz it might just work. Suggestion 2: Squad numbers Forest Green Rovers, arguably among the biggest spenders in the whole of non-league have ten strikers on their books at the moment, ten! Manager Dave Hockaday isn’t, as far as we know, planning to play them all at the same time but even with some serious squad rotation ten seems a bit, well, much.

Look to the two leagues below and last season two teams, under transfer embargo due to various financial woes were forced to play a goalkeeper in midfield as their squad was hit with injuries and the departures of unhappy players. The turnover of players at some clubs across the space of a season is staggering – no wonder there is lack of stability when there is so much movement. Setting a maximum squad number – the A League has 23, with 14 eligible for selection for each playing squad – would create a fairer system, of course Forest Green could still sign ten strikers if they wanted under this system, it just might leave them short elsewhere. Suggestion 3: Mandatory places in the squad for youth players When Gloucester City took to the field against Colwyn Bay on the last day of the 2012/13 season the starting line-up included eight youth team graduates. One was the all time appearance record holder in his 13th season with the first team, three were first team squad members with a handful of appearances between them, the remaining four were current under 18s. Whilst City’s hand was forced due to injuries it showed that a strong link between youth and senior set-ups can pay dividends. But it is a rarity now to see young homegrown players making regular appearances for their local team – you have the smattering of players, like City’s Tom Webb, who are established and who have long histories with their clubs but newer talent is harder to come by, especially when League clubs are offering out their younglings for loans. There is the argument that the step up from a youth league to a senior league is too steep but the kids have got to learn somewhere. The A-League demands that three players from the club’s youth set up are included in the senior squad. And while there is a youth league which runs parallel to the main A-League there is no reason for a similar quota to be applied to non-league. Although the Elite Player Programme has sent shock waves through youth development most clubs will still be running under 18s and youth teams. As Putajumperon pointed out in his Blueprint, children are the future – having former pupils playing for their local team is a big pull for schools – everyone loves a local hero and it cements a club’s place in the heart of the community. Suggestion 4: Marquee players and guest signings With so many ex pros swarming around the non-league pyramid and many more being released each year it is easy to see how wages have started to spiral, there is an expectation that because a player started off as a pro they deserve a certain level of wages. In Australia teams are allowed one “marquee” player, a star player, whose wages sit outside the main capped budget – along with a junior marquee player (under 23, with a capped wage) and a home grown marquee player. This means your Heskeys, Del Pieros and the like – the big stars who command the top wages, but increasingly it has also meant Socceroos regulars and homegrown stars too. Applied to the first three tiers of non-league on a sliding scale this could balance out the spending to some extent, appeasing some of the restrictions of the wage cap. It would stop the Wembley FC nonsense of publicity signings and give a level of control back to the clubs, no more journeymen following the wages, a marquee player would be forced to prove he is worth the money or take a pay cut to fit within the budget. The sliding scale could work with say three marquee players in the Conference Premier, two in the league below and one at step three – optional of course but for the big boys, three big stars is your lot. New to the A League is the guest player signing – essentially loanees and temporary contracts, aimed at attracting big name players from overseas (your David Beckham to Milan during the MLS off season kind of thing) – again this could work, for your big loanees from pro clubs or for the random blasts from the past who pop up in non-league from time to time (see Lee Trundle at Chester last season). So there you have it, its a bit radical, probably a bit bonkers but if non-league is going to continue to evolve something big needs to happen to stop the rot. Too many teams have been lost or maimed due to wild spending and financial fecklessness. Think of all the changes to the game in its history, most seemed mad at the time, maybe it is time to be bold?
Share
Tweet
Share
Pins
Share
Like

Arsenal: Top 10 Defenders of All Time

Defenders are often the quiet and responsible workers. They have to sit back and curb impulses to rush forward and be flashy. It takes special discipline to be a defender. It’s not ...