Share
Tweet
Share
Pins
Share
Like
On Friday night I made my long-awaited return to a football pitch as I turned out for the Lewes FC Elite team in a post-season friendly.  As I crawled off the field with 75 minutes on the clock I made a vow never to criticise a non league player again.  Most have full-time jobs (like me), a family (like me) and have to travel to get their fix of football (delayed, like me, on the ever unreliable trains).  Yet they still manage to keep themselves fit enough to effortlessly manage 90 minutes.  Whilst I have my age as my defence, I was on my knees. 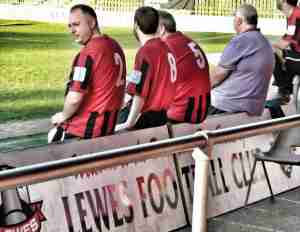 Yes, I could blame the dust-bowl of a pitch, the lack of match fitness (or fitness in its entirety) or confusing tactics (I have to blame someone, so sorry Kev as I missed the pre-match briefing due to said train issues) but the simple matter is my days of playing the game are well and truly over.  So never again will I criticise these fine players, who play not for money, but for love. Forty eight hours later I am sitting at a desk at the most famous stadium in the world, waiting for twenty-two Non League players to take the field in the biggest game in their lives.  For one of these teams, they can look forward to hosting Portsmouth and Scunthorpe United next season, for the other it would be Welling United, Hyde and Braintree Town.  For one afternoon this would be a battle between North and South Wales as to who would be joining Mansfield Town in the nPower League Two next season. 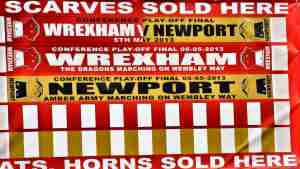 Whilst never an easy way to get promotion, the Play off is the biggest and much lucrative lottery in English football.  Either Newport County or Wrexham would be waving goodbye to the smelly toilets of Ebbsfleet, the constantly waterlogged pitch at Braintree and the bacon rolls at Cambridge.  And of course there was also the lucky charm of the Play Off winners. The Conference National Play Off was introduced at the end of the 2002/03 season and in the nine seasons since, the winner has gone on to cement their place in the Football League.  In fact ten years ago the first winner was Doncaster Rovers, who have gone onto the Championship and now have a shiny new ground as a keepsake.  Contrast this with the fortunes of the actual Conference winner.  Sure, there are the success stories of Crawley Town and Stevenage (Borough) but also in the past decade there has been Barnet, Aldershot Town and Chester City, all of whom will meet again in the Conference next season. It’s been written a million times already, but what the heck, let’s make it one million and one.  It’s been a brilliant year for Welsh football.  Whilst Wrexham fans won’t forgive me for saying this, but I hope Newport win.  That way, each of the four biggest Welsh teams will have each won a major honour this season, three of which here at Wembley.  The fact that Wrexham didn’t let the small matter of a FA Trophy final victory distract their league form is testament to their focus on returning to the football league. 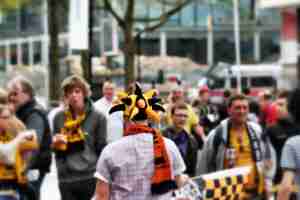 I remember Newport County of old.  They first really came to my attention back in 1980/81.  As West Ham were battering all comers in the then Second Division (dropping just 3 points at home all season), Newport County were hanging around mid-table in the league below.  But come midweek it was a different story.  Both clubs were representing their countries in the European Cup Winners Cup (kids – ask your Dad), a trophy that was taken deadly serious and only had one entrant per country.  This was the competition dreams were made of.  Sportsnight was often a heaven just out of reach for us children at the time, but when we were allowed up late, the names of the foreign teams held our imagination, and made the following day’s games in the playground just a little more continental. The first round saw some big names exit the tournament after two legs.  Celtic, Legia Warsaw, Roma, Monaco and Dinamo Zagreb.  The next round, Sparta Prague and Valencia were gone.  And then it was the last eight.  West Ham United, the mighty and mysterious Dinamo Tblisi, Benfica, Carls Zeiss Jena, Fortuna Düsseldorf, Slavia Sofia, Feyenoord and Newport County. Little Newport County, with the legendary strike force of Tommy Tynan and John Aldridge, taking on Carls Zeiss Jena in the quarter finals of a major European competition. Nearly 18,000 Welsh fans saw their team come so close to a famous result, managing a 2-2 in East Germany and thus only needing a clean sheet back in Newport.  But it wasn’t to be and Jena won 1-0 and went onto lose to the conquerors of the Hammers, Tblisi in the final.  Less than 10 years later and the same club that had competed with such greats of European football were no longer.  County were relegated from the Football League in 1988 and less than a year later were bankrupt, withdrawing part way through the following non league season. The long and often dark road back to the Football League for the exiles started the following year and progress has been steady.  The club have been through the rain, and now can see the rainbow (thanks Dolly Parton for that one).  Justin Edinburgh has built a strong squad that for a while this season looked like they may go up automatically but had to make do with a spot in the play offs.  The future looks bright for the club, especially when we factor in the “elephant in the room” of Chairman Les Scadding and his £45 million he won on the Euromillions lottery.  Scadding only became involved in the club in August and so the full effect of his investment is yet to be seen. 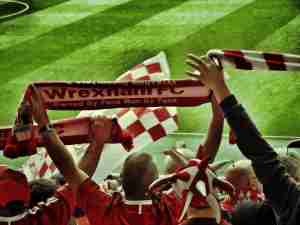 At the other end of the stadium were the massed red ranks of Wrexham, themselves European Cup Winners Cup quarter finalists back in 1976 where they lost to eventual winners Anderlecht.  The Dragons, twenty-three times winners of the Welsh Cup as well as winners of the Football League Trophy back in 2005 (aka The Leyland DAF, Johnstone Paint et al) when Sir Alex Ferguson’s son Darren scored in a 2-0 win over Southend United were attempting to get back into the league after a five season hiatus.  Two years ago the club were served with a winding up order and the future looked very bleak indeed, despite finishing in the play off spots.  Since then the club has been taken over as a Supporters Trust (big tick) and this was to be their second trip to Wembley in a little over two months after winning the FA Trophy final against Grimsby Town in March.  It is also the third consecutive Yesterday the stadium hosted the FA Vase when nearly 17,000 fans saw Spennymoor Town beat Tunbridge Wells 2-1.  Tickets were a sensibly priced £15 (£5 for kids).  Today, that price had risen to £39 on the gate (including a reported £3 admin fee) for this game between the two Welsh sides.  Consequently from our seats, the game was to be played out in front of a backdrop of empty red seats.  Whilst these are once-in-a-decade (or more if you are a fan of the smaller club) occasion, wouldn’t it be better to lower the prices and get more people through the gate?  I knew of many football fans who came yesterday, happy to pay £15 for the game but baulked at playing over £35 for today’s game (the official attendance when announced was a good few hundred LESS than the FA Vase final). Moan over.  Stand up and be counted, for what you are about to receive as AC/DC would have sung at this point.  Welsh pride rained down onto the hallowed turf, like fire being spat from the mouth of an angry dragon. Newport County 2 Wrexham 0 – Wembley Stadium – Sunday 5th May 2013 The opening exchanges were understandably cagey.  In previous play off finals the game has taken a while to really get going, with the weight of expectation being felt by the players.  Sixteen minutes in and the first chance of the game was created by the veteran Brett Ormerod who beat his man in the area before seeing his shot hit the wrong side of the post and go wide.  Ormerod again came close just after the thirty minute mark, firing a half-volley over the bar after good work to get to the byline from Johnny Hunt. Newport’s only response was the long throw in into the area but Chris Maxwell had them all covered, leading to frustration from Edinburgh on the bench as his side seemed happy to allow Wrexham far too much space in midfield. 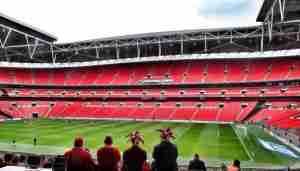 It took nearly to half time for County to produce a decent chance.  Christian Jolley, the forward signed from AFC Wimbledon in November found some space and curled a beautiful effort just wide.  Jolley, wearing gloves (and a short-sleeve shirt) on the hottest day of the year so far had drifted out far too wide during the first half, rarely in the game despite his pace. The first five minutes of the second half produced more action than the whole of the previous 45 with both teams obviously being told in the dressing rooms that they had to try to attack to win the coveted prize of a place in the Football League.  With both teams kicking towards their own supporters the atmosphere kicked up a gear, with the Wrexham fans around me showing real passion .  Ormerod again should have scored on the hour mark, blazing over the bar after player/manager Andy Morrell’s shot had been beaten into his path by Lenny Pidgeley.  The excitement proved to be short-lived as the game went back into its shell and the predictable substitutions started to arrive with both benches having an eye on a potential additional thirty minutes. And then it happened….85 minutes on the clock…a hopeful ball over the Wrexham defence saw Jolley take the ball in his stride, hold off a defender and lift the ball over the on-rushing Chris Maxwell.  Deserved?  Probably not on the balance of play but it was a very well taken goal.  Wrexham to their credit didn’t let their heads go down and roared on by the fans at that end of the stadium laid siege to the Newport goal, sending up Maxwell for a couple of corners but it was not to be.  Despite a Ormerod header then couldn’t create anything, and then to add insult to injury Newport scored a second in injury time when Aaron O’Connor smashed the ball home after his first effort was saved by the feet of Maxwell.  Game over, Newport County were on their way back to the Football League after a quarter of a century.

All that was left was for the Wrexham fans to salute their team.  It has been quite a season for the Dragons, and they will feel disappointed to get this close to a return to the Football League.  Whilst they can point to the FA Trophy victory here a few weeks ago as a good return for the season, the ultimate prize was just out of their reach. For Newport County, the planning for next year can start in earnest.  Their rise from the ashes will give heart and inspiration to many teams who today are down on their luck.  With the cup in their hands, the champagne corks popped, the celebrations began that would ultimately last long into the night all the way down the M4.
Share
Tweet
Share
Pins
Share
Like

Will Marouane Fellaini Sign a New Contract at Manchester United?