Share
Tweet
Share
Pins
Share
Like
All you Premier League pansies out there don’t know what you are missing. Whilst you are being told to sit in your plastic seat, drinking your club-branded fizzy pop and eating your bland, dubious quality burger, thousands of other football fans are enjoying the game in its most purest sense. The beautiful game exists many leagues below the Emirates or Stamford Bridge, with more people watching grass-roots football than in any other country around the world. I’m not here to tell you about the joys of having a beer when you are watching the game, eating freshly cooked food locally sourced (Sussex Stilton on your venison burger sir?), whilst taking part in the age-old tradition of changing ends at half time. We all know that is what makes watching non league football so great. Nope, I am here to extol the pleasures of one feature of the game at this level. Something that all you Premier League or nPower followers simply cannot understand the pleasure it brings us, whether our team is winning or losing. Two words. Golden Goal. 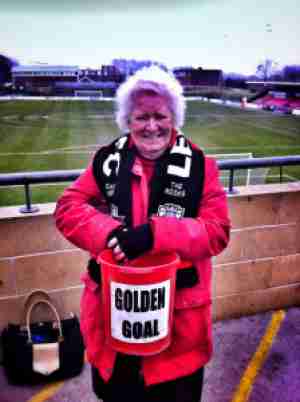 Whether you be 8 or 80, punk or rocker, innie or outie, Beatles or Stone, rich or poor, you have as much chance as winning as your mortal enemy. To me, it is quintessentially Non League, summing up the proximity the fans can get to the players themselves. The volunteers who man the buckets on the other side of the turnstile don’t need a long-winded sales pitch. A simple shake of the bucket and the utterance of those two words are enough to have even the tightest fan handing over a pound or two. Pure love goes into the preparation of the tickets – each is hand cut, hand folded and hand blessed, ready for the game. Some, like Cynical Dave would never dream of opening their ticket until that first goal goes in, unwrapping the carefully folded piece of paper as if it were the last present under the Christmas tree. Others know their lucky minute from the first kick, caught in a dilemma if the ball is in your penalty area when the big hand ticks over to the right minute. Surely it’s OK to secretly hope for a goal, even if it’s at the wrong end if it means winning £25? Twenty-five pounds. A Pony. That’s a full day out in the non leagues and enough for your bus fare home where as that would get you little more than a seat behind a concrete post for thirty minutes at Loftus Road. Some fans will always buy their tickets from the same person, digging deep into the bucket to secure their chance of winning. For me? I’m easy. I will often wait until kick off, relishing the fact that few tickets are left. There are, of course, some tickets you don’t want. I have pulled out nil-nil just once, which at this level is as good as throwing your money away (Lewes play out one per annum on average at The Dripping Pan). The 1st minute is also not a very good bet, as few teams tend to attack from the first whistle, although that would have been a winner twice this season. The 45th or 90th minutes are of course the best tickets as these give you the respective injury time as well – as we saw on Thursday against Margate. And then there is the definition of the goal time. A ticket for the 30th minute could mean anything from 29 minutes and 1 second, or 30 minutes 59 seconds depending on who announces the goal time. On the occasions I have held the microphone I define the goal in the former, rather than the latter. 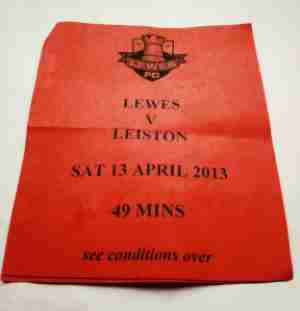 Often, holding out hope for winning the golden goal is the best part of the match. Surprisingly, non league games can often be dire. But having that potential small pot of gold in your hand, or pocket is often enough to get you through the worst. So let’s look at the real life emotions of the Lewes fans as they took their place on The Jungle for the first half of the game against Leiston. Ah yes, Leiston. It is a dirty word down in these parts. Whenever things are looking bleak, you can snap out of it with the sentence “remember Leiston”. Whilst the two teams are today playing at the same level, back in October 2008 they were separated by four divisions. The teams met in the Fourth Qualifying Round of the FA Cup, one step away from the first round proper. After a surprise draw in Suffolk, few gave the Suffolk side any hope of victory in the replay. But not only did they win, they won easily, setting up a tie with Fleetwood Town. Don’t mention the word to captain Chris Breach who played on that night. So four and a half years later we were meeting as equals. In fact Leiston were as good as safe as you could be for another season when they arrived in monsoon-like conditions.  Lewes needed the points. Badly. All of us would of course swap not winning the golden goal for three points, right? Dave….RIGHT?  At 2.45pm the main concern was whether the game could actually start at all.  It looked like the Golden Goal tickets would all be null and void, unless someone had slipped in one that simply said “cancelled”. Lewes 0 Leiston 1 – The Dripping Pan – Saturday 13th April 2013 To the victor, the spoils of war are as sweet as nectar, so says my headline today.  Alas that wasn’t any of us today.  In fact with teams around Lewes pulling off more amazing results (bottom of the table winning at title-chasing Lowestoft Town would have busted on coupons), we could only grumble at the full-time whistle that the game should never have been completed.  Conditions were poor, but were the same for both sides as they tried to play the ball through the puddles.  Standing water made running, let alone passing almost impossible and so it was no surprise that the winning goal came from a weather-assisted mistake. 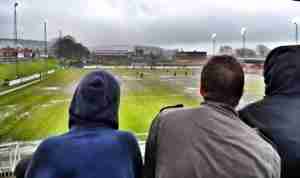 By the time Gareth Heath had seen his corner fly into the net, thanks to the strong wind which took keeper Tom Betts by surprise I had already lost any hope of winning my Golden Goal.  For my piece today I had bought 5 (five!) tickets, ranging from 5 to 72 minutes.  Most of the 400 plus crowd were resigned to seeing a goal-less draw as neither team could beat the elements. Lewes came out for the second period wearing last season’s home kit such was the state of their attire after 45 minutes.  Chances were few and far between.  The Rooks had a good shout for a penalty as a Leiston player slid a dozen yards into the ball, clearing making contact with his arm but that would have been harsh.  Only the brave (Dave Lamb), foolish (Nick Williams) and the Scots (Cynical Dave) braved the Jungle in the first half as the rain lashed down.  For the second half not one person stood on the open terrace – a sight that has rarely been seen at The Pan. The eyes of many in the Philcox were glued on their smartphones as events elsewhere started to unfold.  A draw wouldn’t be a disaster for Lewes, even if most of the teams around us were at least getting a point.  In fact with twenty minutes to play we had moved up to 4th from bottom.  Who needs to win the golden goal when life is good.  But then Leiston, on a rare venture into the Lewes box gained a corner.  Heath swung it in, looking for the onrushing players on the edge of the six-yard box.  However, the strong wind took hold of the flight and the ball arced under the bar, despite Betts desperate attempts to keep it out. 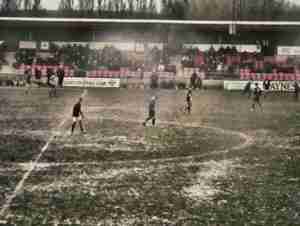 Full time saw the players get a standing (well, we were hardly likely to sit down on the wet terrace were we?) ovation.  You could not fault the spirit or the effort today.  The elements (and Leiston) had won.  The fight for survival would take us to Earlsmead, north-west London, home of Harrow Borough in seven days, themselves not quite safe from the drop zone where the Rooks would have to fight for the golden goal and more importantly, the platinum three points.
Share
Tweet
Share
Pins
Share
Like

Integrity versus loyalty.  Always a very difficult decision.  For the TBIR team we faced a big dilemma this weekend as to where we should nail our FA Cup colours.  Our heart said Lewes v ...