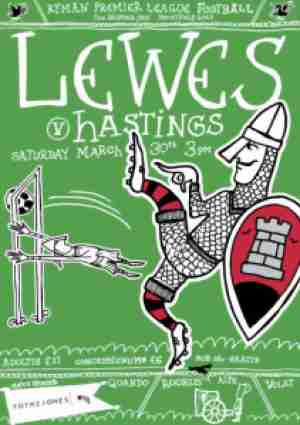 A week has elapsed since Lewes lost to a referee and his liberal interpretation of the rules regarding injured players.  Since then many words have been written on forums, websites and social media but nothing really matters.  It is irrelevant if the referee from last week had admitted the error of his ways, and as penance wandered down Lewes High Street in an Eastbourne Borough shirt made of sack cloth.  The result stands and Lewes are still deep in the sticky toffee mire. Seven days on and I have no idea who the current favourites for relegation from the Ryman Premier League are. It could be two from eight in all honesty.  A few weeks ago when some of our relegation rivals had up to eight (8!!!) games in hand, the future certainly didn’t look orange. But since then winter has refused to remove its icy grip on the league and now those teams potentially face a farcical game every three days just to finish the league by a ridiculously early end of April deadline. It’s hardly like this season is unique. The last three seasons have seen poor weather decimate the Ryman league fixture list. Once bitten, twice shy? No, three times bitten, fourth time plead ignorance it seems. So clubs like Thurrock and Hastings United still have four games in hand on Lewes as I write this, but with fixtures for them still falling foul to the weather, the points in the bank are certainly favourable. Thurrock have suffered due to the pitch at Ship Lane with poor drainage and the pitch being used by two other sides. Hastings are paying the price of the  heinous crime of having the best run a Ryman team has had in the FA Cup for decades. Boo, hiss, the cheek of the Arrows in being successful! Unfortunately the league takes no account for cup success. On one hand they are happy to bask in the glory of Hasting’s cup run, representing the league in front of the national media, whilst on the other they are given no leeway in terms of fixture congestion caused by the cup run. I still do not understand why the league has to finish so early? The last games have to be played on the 27th April. Nine days later on Bank Holiday Monday, the play off finals will determine which teams are promoted. The league will then restart some four months later.  Some leagues, such as the Kent Premier have agreed to a week extension. Even those highly paid prima donnas in the Premier League get less of a break and still don’t moan. Many comparable leagues in Europe continue their season into May, and even in the case of Italy and Denmark, June. I know only too full well the club’s dilemma of the weekly wage bill but perhaps there could be some creative thinking in these parts. Many players are not on contract, rather on pay per week. Couldn’t they adopt a pay per game basis for final part of the season? 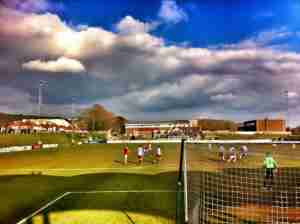 Anyway, back to today and the local derby against Hastings United (boo, hiss). Our rivalry goes back all the way to 1066 where the locals still believe to this day that King Harold was shot in a friendly fire accident by a Lewesian. Simmering rivalry is a phrase I would use to describe tensions over the past thousand years, with blame being thrown across the River Ouse for such incidents as The Great Fire of London, The Wall Street Crash and Joe Dolce getting to number one back in 1981. Fortunately football came along and we’ve been Facebook friends ever since. Nobody was more pleased, in a jealous “that could have been us” way, of their amazing run to the FA Cup 3rd round this year. My only disappointment, and we see it everywhere in football, is that a lot of those “life-long loyal” Hastings fans who went to the Riverside seem to have forgotten where The Pilot Field is when the team really need their support as they fight against relegation.  Despite a high of over 4,000 at home for the FA Cup game against Harrogate Town, just four days before only 458 came to the game versus Concord Rangers.  On Tuesday night the crowd versus Met Police was down to 219.  When the going gets tough, those loyal fans get going. It would be a real shame if the low point of such a momentous season is a drop into the Ryman League South. We of course wish our good neighbours all the best in their remaining 11 games AFTER today. So it’s been a remarkably quiet week in Lewes. After the unbelievable scenes last Saturday against Kingstonian and *those* decisions that even had the K’s fans belly chuckling, our official line was one of disappointment that the official did not interpret them in accordance with the FIFA rules of the game. Inside of course we were fuming, but the big positive was the excellent second half effort and intent so come 3pm on Saturday when the Rooks lined up against Hastings, the fire would still be in the bellies. A visit of Hastings this season also means a visit from Hugo Langton. If you ever feel your love of the game waning, talk to Hugo. The man loves the game, and wants to see it coached in the right way, played in the right way and managed in the right way. Hasting’s gain is the rest of football’s loss. But of course for two hours on Saturday afternoon we hoped he had got his tactics all wrong and that Hastings would leave the Pan with an arrow firmly in their behind. Lewes 1 Hastings United 2 – The Dripping Pan – Saturday 30th March 2013 Of course a professional like Hugo hadn’t got it wrong and two set pieces within a 90 second spell in the first half saw Hastings United take all three points in this relegation battle.  Whilst Lewes tried to throw the kitchen sink at the visitors in the second period, there wasn’t enough invention to get past a solid Hastings defence who used the mantra “if in doubt of the plan, boot it out of the Pan”. With the sunshine threatening to spoil the run of poor weather as we prepared to enter the fourth month of the year, Lewes started brightly and could have had a penalty as early as the 2nd minute when Brinkhurst was bundled over as he entered the box.  The referee blew his whistle for a foul but looked to his linesman for guidance of where the offence took place.  He looked back, shrugging his shoulders.  Benefit of doubt to Hastings and a free-kick was awarded. 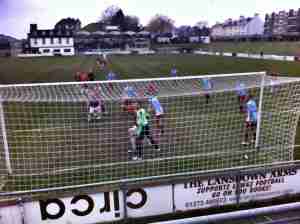 Whilst the Rooks looked busy, they struggled to break down the Hastings back four, seemingly forgetting the attacking intent they had last week against Kingstonian.  However, the opening goal took everyone, including me by surprise.  I had forgotten that I had the microphone for the day and so when Hastings took the lead in the 11th minute I patiently waited for the announcement of the opening scorer.  Of course, that announcement should have been made by me.  Fortunately ClubSec Kev was on hand to tell me that Hastings Player/Manager Sean Ray was the scorer. As if some of the Lewes players had missed the first goal, Hastings decided to rerun it two minutes later, this time leaving N’Diaye unmarked at the far post to double the lead.  The Jungle wasn’t happy but got behind the team, knowing that in Pleatland, 2-0 is the most dangerous scoreline in football.  Breach’s downward header that found the one bone-dry spot on the pitch and bounced over the bar was the best chance the Rooks had in the first half. Half-time.  Time for announcements and to sample some of the fantastic cakes, entered by the fans in the Great Lewes Bake Off (including the very unusual but delicious Parsnip and Maple Syrup winning entry) whilst the kids played “hit the chicken” penalty shoot out.  The feel good factor around the pitch was still there.  If only we had a slice of luck somewhere. Just three minutes into the second half and the Hastings keeper landed awkwardly, hurting his knee.  Of course the official stopped play (are you watching Mr. Spain?) and after some lengthy treatment the keeper decided to carry on, obviously immobile and in considerable pain.  Yet not once did Lewes try to take advantage of the situation. The Hastings defenders took a no-nonsense approach to defending which was effective in helping increase our match ball costs. After ten minutes Cruttwell couldn’t carry on and so he was replaced by substitute Sam Adams (no beer related jokes here please) who seemed to enjoy the banter with the crowd.  Still he was hardly tested as Lewes tried to play the ball through the middle to Godfrey rather than using the width and pace of Brinkhurst and Harding. 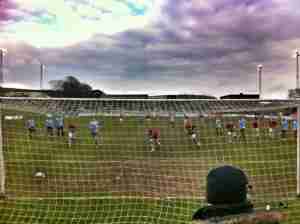 With just under 15 minutes to play Crabb broke into the area and went down under the challenge from Ray.  From our angle it could have been given either way but with the referee some way behind play, his view would have been of man playing man rather than the ball.  Beckford stepped up and all of a sudden Lewes were back in the game.  But Hastings stuck to their game plan which was ruthlessly effective. Eleven minutes of injury time followed but Lewes simply couldn’t break down the Hastings back four.  The final whistle brought some wild celebrations from the Hastings team and some slumped shoulders from the Lewes players.  788 fans, the second biggest of the season at The Pan and the fifth in the division all season deserved more of an Easter treat on a chilly afternoon, and the red and black half went on their way nervously looking at results elsewhere.  Monday’s game away to Bognor Regis Town cannot come soon enough.
Share
Tweet
Share
Pins
Share
Like

Cristiano Ronaldo has become synonymous with record-setting now. The Portuguesse netted twice against Juventus to break 600 career goals last month. And while he still...