The Pain of Spain fails to referee the game

Share
Tweet
Share
Pins
Share
Like
It had been quite a good few weeks for the Rooks. Results on the pitch had been poor – in fact we were bottom of the current form table – six defeats from the last six games had brought Mr Relegation sniffing around our front door and our chance of a home win against Margate (and a chance to see match ball sponsor Luge Pravda lead the teams out in his PE kit) were dashed by the freak snow that hit East Sussex, cancelling the game for the second time in 2013. 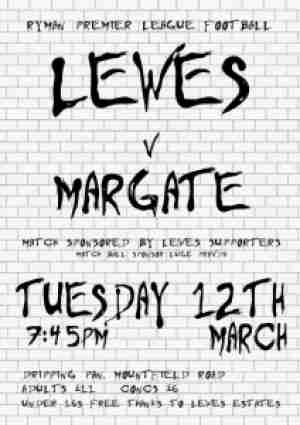 But a football club is not just for Christmas, it’s forever and so our job as Directors is to build a sustainable club on and off the pitch. We are all 100% behind Simon Wormull (oh God, that sounds like a dreaded vote of confidence! Sorry Simon!) and believe that the team will comfortably avoid the bottom two. So it was positive to see our fantastic match posters get some of the press they have deserved. Both Proworx and East Web have a done a sterling job in recent years as designers, under the guidance of the likes of club Directors Charlie Dobres, Ben Ward and Patrick Marber (see the set here) and this week the national press came calling. BBC local news, Freund11 in Germany, MSN, Yahoo!, The Independent, The Sunday Times, heck even the Daily Mail got in on the act (although their interpretation of the facts still leaves a lot to be desired). Fine praise indeed, and it felt like the world and his wife were now following our results. So after we put away our Kiss-Me-Quick hats from the Margate postponement, I looked forward to a short trip on the bus to Cray Wanderers for a relegation six pointer. After a morning of stripping (window ledges rather than with the employees of FYEO alas) CMF approved my efforts in the “Husband” department and sent me off to the bus stop, packed lunch and Thermos (you should always write that with a capital T as it is a brand and not an item – just like Hoover, Portakabin and Airtight), slipping my bus fare in my pocket and telling me to be home by 6pm. Alas, just as I set foot out of the door, Mr. Monsoon paid South East London a visit and another game fell by the wayside. 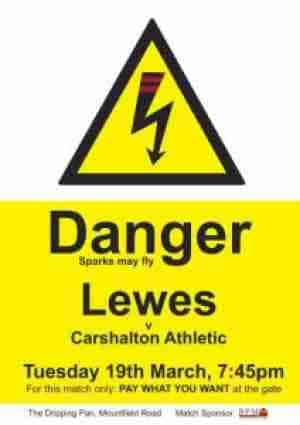 So roll on 80 hours and we were back at the Pan. If Cray Wanderers was a six pointer, then the visit of bottom of the table Carshalton Athletic was a twenty-four pointer. Of course, this wasn’t the first time Carshalton had come to visit us. Just a few weeks ago they arrived in town, had a player sent off after less than 100 seconds, found themselves two goals down and then lost their manager all in the first half. As the teams headed for the dressing room the power to the Pan failed and despite us all holding up our mobile phones, the referee deemed it wasn’t enough so the game was abandoned. The Ryman League rules state that if a game is abandoned by the referee during or after half time, then no refund is due to paying fans. We met as a board soon after the game and decided to offer admission for the re-arranged match as “pay what you want”. If fans wanted to pay 1pence or £10 then so be it. Sometimes doing the right thing is more important than stupid rules. Since then the fortunes of both clubs have been on a downward spiral, and with games running out this was a must-win game for both clubs. Alas, there could only be one winner (unless it was a draw of course) and Lewes edged a tense game which saw the return of fans-favourite Harry Harding to the Rooks starting XI, playing on an expenses only basis (footballer playing for the love of the game, shock!). The floodlights stayed on, our special guest Steve Claridge was kept topped up with Harvey’s and the 409 spectators paid an average of £4.72 (and 95 Euro cents) to watch a vital win for the Rooks. 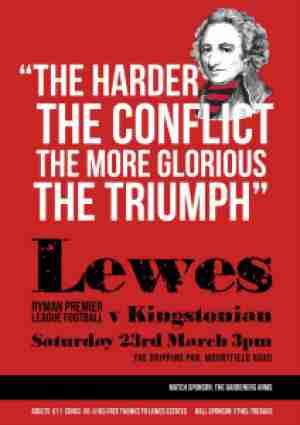 So could the team keep up the form with the visit of Kingstonian? Since our return to the Ryman League they have been one of our bogey teams. Played three, drawn one, lost two. Hardly inspiring statistics, but we all know that stats can prove anything (did you know for instance that if I lived in San Marino and was an average goalkeeper I had a one in three chance of playing international football?). Kingstonian have suffered in recent weeks because of the weather and with their games in hand would propel them in with a shout of the play offs. Their current form wasn’t good. In fact, the worst in the whole division with just one point from their last six games. Could the Rooks smell victory in the air again? Or was that simply Cynical Dave’s new Horn aftershave? Come Saturday morning and I looked outside. Snow. Everywhere. This is getting very very boring now. People have championed for a winter break in English football for years. But what good would that do? Lewes’s first postponed game this season was on the 22nd December. Three months later and the weather is just as bad and we were supposed to be well and truly in Spring. Perhaps we should adopt the model used in the Danish lower leagues where the football stops in mid November and doesn’t restart until April, although the current weather there does look good for next week’s recommencement of league games.  For once it appeared that Lewes was in a bubble of good weather, so whereas over 60% of the Ryman League games fell by the wayside pre-lunch on Saturday, Lewes was on, passing a pitch inspection after the (local) referee deemed the pitch playable, albeit with the consistency of “sticky toffee”.  Got to love referees, right?  They do a great job. Lewes 1 Kingstonian 2 – The Dripping Pan – Saturday 23rd March 2013 How often do you ever see an incident in football where the keeper is fouled and play is allowed to go on?  Once?  Twice a season?  What about twice in one game?  And what about when both incidents lead to goals?  Unheard of I know, but today we were blessed with a referee who was responsible for this incident two years ago and ended the game being jeered by over 600 home fans, and laughed at by the rest.  This was the same Mr Spain who failed to give Lewes a penalty when they played away at Hastings United on New Year’s Day for an assault on Steve Brinkhurst seen by 750 people. Let me paint the picture.  The game is entering injury time, with the scores level.  A ball is played into the penalty area, the keeper comes out and catches the ball in the air.  As he falls he catches a defender.  They both fall to the floor in a heap, the keeper not moving. Amazingly play is allowed to continue for 10-15 seconds as the ball is first cleared off the line and eventually ends up in the back of the net.  The keeper is still motionless, the defender slowly moving.  The referee awards the goal, the crowd are stunned into silence at the decision.  The away team’s fans then suddenly realise a goal has been awarded and they go mad in jubilation.  Staggering. 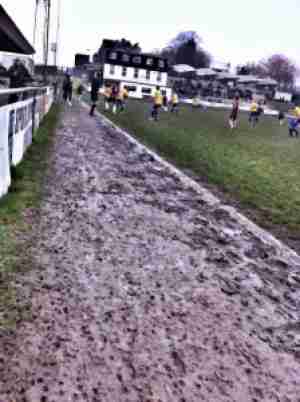 The history book with simply record this as another home defeat for Lewes, but they deserved so much more.  There will be few of the 686 fans who attended the game who will think otherwise.  The second half of the game saw Kingstonian survive a battering as a highly motivated and determined Lewes team simply kept on pushing forward, chasing a game where they had fallen behind to a controversial goal in the first half where Thorp, again, was fouled as he caught the ball, causing it to break free and find its way into an empty net.  We all think keeper’s are far too protected and so such goals, where there was minimal interference, are just in a way.  Half time, Lewes 0 Kingstonian 1. Mr Anderson was making his first ever appearance at the Pan, gong one step further this season than Mr Pravda and his Jonah touch of only trying to get to games that are postponed.  With his new Lewes hat on, and a top pint of Darkstar’s Darkness, left over from the Lewes FC Beer Festival, he saw a very different Lewes performance from what we had all seen recently.  The first half goal was against the run of play, and in the second half the Rooks pushed forward, finally getting their just rewards when Nathan Crabb’s shot from close range was bundled into the net by a Kingstonian defender on the line. Even a betting man would have refused to give odds on Lewes going on to win the game.  The impressive youngster Joe Kay hit the post was a shot, and twice goal-bound shots were headed away as Lewes looked to pick up valuable points that would take them up into 15th place in the table. But with time running out, Mr Spain decided that he wanted to be the centre of attention and had a very different interpretation of the FIFA rules of the game that allow the referee to stop the game in the event of an injury to a goalkeeper, and one that appears to be serious.  You could even argue that in the spirit of the game we want, Kingstonian should have stopped play on seeing the injured players, but can you blame them for playing on? At full-time it must have been hard for the Lewes bench to retain their composure in such circumstances.  But they did.  Who knows what the loss of one point (or we could even argue all three) will mean in the long-term but there will be few who were present (including officials from the Sussex FA) who will give Mr Spain any credit for that one decision. Football isn’t more important than life or death but it does determine your mood for the rest of the weekend.  It will take something special to bring my cheery outlook back….What did you say Deaks, I’ve won £68 in the monthly supporters club draw?  Well, isn’t football brilliant!
Share
Tweet
Share
Pins
Share
Like

Imagine this: you’ve written the best article in your life but the headline is weak and unengaging. This is it. Nobody will click on your article and nobody will read your terrific ...