Every rain cloud has a silver lining 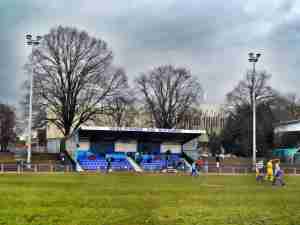 When a complete stranger addresses you for the first time with “Are you a copper?” you immediately think that you are definitely in the wrong place. Welcome to Ilford FC. Not the normal welcome you would expect from a turnstile operator, but this one was giggling away, sipping a Stella. A huge grin spread over his face as he then said “I’m guilty of being an Ilford fan”. I breathed a huge sigh and handed over my £10. I’d been to Ilford FC before for twenty minutes. It was enough time. A dull 0-0 draw back in September against Thamesmead Town played in an unloved athletics stadium. I didn’t think I would be back here in a hurry but here I was walking into the Cricklefield Stadium. Beggars can’t be choosers in the non leagues these days. Winter, which started back in October still had its grip firmly on the fixture list. I was supposed to be standing on the terraces at Hayes Lane, watching Lewes take on Cray Wanderers. But I wasn’t. I was here. I was loving life. My plan B (Corinthian Casuals), C (Walton & Hersham), D and (Lordswood) had all gone the same way as Cray. Scrambling around for another option at 2pm my eye was drawn back to Ilford. Had I been a bit too harsh before? I’m all for giving someone a second chance and so I headed east to the metropolis known as Ilford. 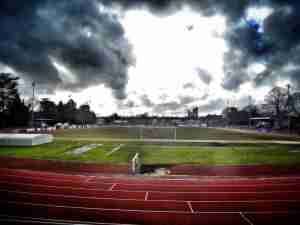 Ilford – literally translated from latin as “Bad Bridge” have been a fixture in the non leagues for over 130 years. Whilst they may have never hit the heights of neighbours Dagenham & Redbridge (who they can lay some family tree claim to through the numerous mergers that have taken place in the area over the years) they can lay claim to two Amateur Cup Final wins in 1929 and 1930 when they beat local rivals Leyton and the wonderfully named Bournemouth Gasworks Athletic. But the current edition of the club have only been around since 1987. Times are hard for Ilford. They survive on crowds of less than 50 on most occasions, battling for the title of “least supported team in the league” with tenants Waltham Forest, and fellow relegation candidates Redbridge. Whilst West Ham play in the richest league in the world just a few miles away, Ilford survive on a tiny budget and a massive dollop of hospitality. This wasn’t supposed to happen. I had mentally programmed myself not to enjoy the afternoon, rather using the opportunity to get in a game of football after a two-week hiatus. But something was making me smile. Deep down inside I had a feeling that this would be a good afternoon. 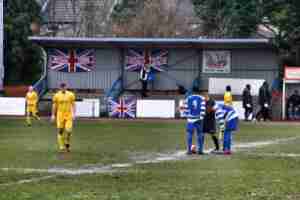 The visitors from down the A12, Witham Town, had come with a decent following. All bar two fans were standing by the main stand and it soon became apparent why. On the far side, surrounded by a number of flags was Witham’s number one fan, James. Remember him from a few weeks ago when we saw them play at home versus Sudbury. Who needs a microphone when you have a super fan like James. He is a true non league legend, never giving up his vocal encouragement. At one point whilst I was next to the Witham dugout one of the substitutes craned his neck to see how many away fans were making the noise. He looked at me and said “Is that just him?” Of course it was. Whilst Ilford were looking nervously over their shoulder about a return to the Essex Senior League, Witham were still stubbornly refusing to give up on their play off hopes. A win here would put the pressure back on those above them, although goal difference was a concern – they simply didn’t score enough goals. Ilford 2 Witham Town 7 – Cricklefield Stadium – Saturday 16th March 2013 Wow, where do I start with this one? Nine goals, three penalties and a good old fashion playing surface from the 1970’s. It must have been touch and go whether the game went ahead but I for one are really glad it did. Hats off to Ilford for approaching football with a Corinthian spirit of hospitality ahead of victory. I’m sure that is no consolation when looking at the result in the cold hard light of day, but that is football. Everyone needs to get down to the Cricklefield Stadium to watch a game. Unfortunately it seems that neither team had anyone who uses Twitter and so I have no idea who scored any of the nine goals in this pulsating game. Witham were the better team but perhaps not by that margin. I can tell you the visitors took the lead from a header after 10 minutes or so. The Ilford manager laid into his captain – “You are the tallest person on the pitch but you cannot head the ball…you muppet”. Of course five minutes later when he went up the other end and equalised with his head the manager was a tactical genius for sending him up for the set piece. Goals followed every ten minutes or so, with Witham having packed their shooting boots, or rather their heads. The poor Ilford keeper was powerless with each of the three Witham goals in the first half, before being sent the wrong way from a harshly awarded penalty on the stroke of half time to make the score 4-1. I headed upstairs into the Olympic Bar and fell in love with this place. West Ham memorabilia lined the walls, including a rare copy of the squad’s 1975 FA Cup Final ALBUM (not just a single back in those days) Hail to the Hammers. Food was on sale at bargain prices. Pukka Pie? £1.50 Sir. Heinz Chicken Soup with a roll? £1.50 Sir. Gingsters Steak Slice? £1.50 Sir. I think you can see a pattern here. And the view of the ground? Well, floor to ceiling windows certainly gave you a panoramic view of proceedings. Best non league bar of the year (bar the Dripping Pan, of course).

The second half was just a minute old when Witham were given another penalty. Up stepped the number 7 for the second time in just a few minutes of game play and once again sent the keeper the wrong way. Five became six when a shot from distance nestled in the back of the net. The keeper by this stage simply wanted the game to end. He laid on the ground, not wanting to get up and had to be helped up by his centre-back. Game over. Six-one. But then the sun came out, illuminating the Witham goal and Ilford started to attack once again. As if guided by some guilt at the two he had given at the other end, the referee awarded Ilford a penalty for a soft challenge. Not often you see three penalties in one game, especially with all three converted. Any hope of a comeback were then snuffled out by Witham who scored a seventh to wrap up a good day on the road for them, but one to forget for Ilford. 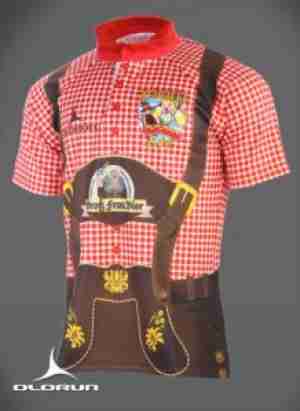 I consider myself lucky to have seen this one, along with 55 others. Clubs like Ilford have to battle every day for survival, and it is the little touches like the amusing welcome from the chap on the gate, the warming soup served with genuine hospitality and the handshake from a fan as I left, asking me to come back one day soon, that mean so much. Every cloud has a silver lining and for me it was listening to that inner voice on a day when said cloud dumped the Atlantic Ocean on South East London. The same voice that also told me to buy THIS shirt. Still can’t always be right.
Share
Tweet
Share
Pins
Share
Like

About Imber Court Imber Court is the Sports and Social club for the Metropolitan Police and is as well appointed as you would expect.  The complex has tennis courts, squash courts, swimm...