Share
Tweet
Share
Pins
Share
Like
Richard Nixon’s lasting legacy was the suffix “gate” being added to any event or scandal After two defeats on the road to teams at the top end of the table, Lewes desperately needed to get back to winning ways as they travelled up to North London for the re-arranged fixture against Wingate and Finchley.  In the past few days we had seen two clubs with completely differing financial outlooks trying to encourage more local involvement in the fortunes of their clubs with mixed results. Wingate and Finchley is another that faces a bi-weekly battle to win the hearts of the floating fans in an area that is dominated by Tottenham Hotspur.  The club have the lowest average attendance in the Ryman Premier League at just 142 but if only the locals decided to come down to the Harry Abrahams Stadium they would be smitten by a great ground and some fantastic hospitality. 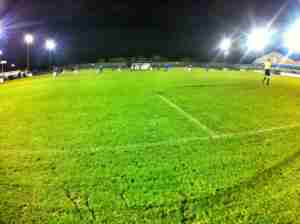 In truth, the latter is all a club at this level can do.  Marketing budgets do not stretch to billboard on the North Circular or even adverts in the local press for clubs like Wingate and Finchley.  They rely on volunteers to keep the club running and on an upward trajectory.  Despite the FA’s PR machine trumpeting the investment they make in “grass-roots” football, the cash seems to miss out on this level of football.  As I have mentioned before in my Blue Print for Non League football, I would like to see professional clubs like Spurs give a helping hand to their local sides.  An ad in their programme, or on their website giving some information about forthcoming games could have a massive effect.  If 20,000 read a programme, then just 1% of those who attend a game would more than double the average attendance at Wingate and Finchley. The bad weather over the last few weeks had meant this would be the first of two midweek games Lewes would have to play in North London.  This of course causes some players (and ultimately the club) an issue.  Players have to work and a 7:45pm kick off means that the team have to depart Lewes around 3pm, which means time off work.  Some employers are not as flexible as others and so there is no guarantee that clubs can pick from their strongest side.  And we needed that for this game against a team who had picked up some impressive results in recent weeks.  Wins against Margate and Wealdstone had been against the odds, whilst the Rooks were yet to win a game this year. This was one of the few games where I had the travelling advantage compared to the rest of the Lewes Lunatic Fringe.  Whilst they had to leave work early and make the 80-odd mile northwards, I had the simplest job of crossing the road at work, hoping on the Northern Line and have someone wake me up at East Finchley.  After the massed ranks of over 100 fans at Whitehawk on Saturday the travelling support was down to the hardcore dozen or so take their place, safely, behind the goal to try to will the ball into the back of the net. Traffic issues had meant the Lewes team had only arrived at 7pm (just the 2 3/4 hour journey) meaning that preparations were far from ideal. But this is the issue bad weather postponements and a refusal to have flexibility in the season end dates causes. As it was Lewes had brought potentially their youngest squad ever to a first team game (some wag suggested that this was because schools finished at 3pm and thus they could make the journey) with over half of the team coming from Nick Brown’s all-conquering U18’s side. The night was certainly one that would have sane person reaching for a blanket in the sofa in front of Emmerdale, but a turn out of around 25 from Lewes certainly helped boost the attendance over the three figure mark. It was testament to the team spirit that once again suspended Jack Walder and injured Steve Robinson had travelled with the squad to lend their support. Whilst the fans headed into the bar I took the door marked Directors and Guests only. Ah the warmth of good old fashion hospitality on a cold cold night. Wingate and Finchley are always very welcoming with a fine array of chocolate biscuits and a warming hot meal to send us on our way post game. It was also good, as always, to catch up with Mike Bayly, one of the brains behind Non League Day and occasional author of articles on this very website. More of the same are coming soon, Mike promised readers. After two consecutive away defeats to teams at the top of the table, this was a must win game for the Rooks, if for anything because on Saturday free-scoring and second place Concord Rangers were due to arrive at the Pan. Despite recent postponements, Lewes had still played more games than any team in the division bar bottom of the table Carshalton Athletic. David Pleat would of course say “It’s better to have points in the bank than games in hand” but he also says “a 2 goal advantage is the worst score line in football” and “it’s easier to play against 10 men than 11”. Tactical genius. Wingate and Finchley 2 Lewes 4 – The Harry Abrahams Stadium – Tuesday 5th February 2013 No sooner had I taken my position behind the goal with the rest of the LLF (although missing Terry who rumour had it had been acquired by Whitehawk as their number one fan) than the home side were awarded a penalty. The big clock on the side if the pitch said we’d played just five minutes. From our distant position it appeared Hamilton had brought down a Wingate player in the box. No idea if he was the last man or not but a long talking to and a yellow card held up proceedings before O’Sullivan slotted home the penalty. 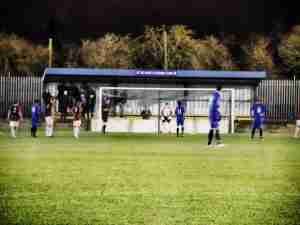 For the next ten minutes it looked as if the home side would run away with the game. Anthony Thomas, still Lewes’s top scorer this season despite his move to North London prior to Christmas looked dangerous, with a point to prove against his old club. Something wasn’t right and with just five minutes on the clock Worms made a substitution, taking off Beckford and replacing him in midfield with Ryan Fergany (remember that name for the future). The move had the desired effect within minutes. With five minutes gone on the clock a corner was swung in and Godfrey’s header was bundled into the net by the keeper. Steve Brinkhurst’s Dad standing with us was claiming the assist for his son and made sure ClubSec Kev made a note of that on his KevPad. With just a few minutes left in the half Lewes took the lead from another set piece. Brinkhurst’s corner was met with force by Chris Breach. The keeper could only parry the ball (he wasn’t enjoying his evening by this stage and we were reminding him on regular intervals) back to Breach who made no mistake with his second bite of the yellow football-shaped cherry. Brinkhurst senior once again claimed the assist but the “Dubious assist committee” ruled it was a significant contribution rather than a direct assist. Despite only five minutes on the clock, which by this stage we’d realised was broken, Lewes went into the break in the lead. Our mood had changed from “we’d take a point” to “we can win this”. Our mood got even better after half time. It wasn’t the slice of Battenburg that did it, although that slipped down very nicely but an early second half goal from Steve Brinkhurst, firing the ball across the keeper from an acute angle. We couldn’t deny that one had to be recorded on the KevPad but his claim that the assist and the “significant contribution” were his was stretching it a bit far. Lewes then seemed to run out of steam. Thomas tried his luck from 37 yards (consensus was that 35 was normal, 40 spectacular, so we settled in the middle) which Thorp could only watch as it hit the bar and bounced back into play. That bloody two goal advantage is the most dangerous score in football, everyone knows that, don’t believe the claptrap Pleat says. Our nerves were put further on edge when Thomas fired in from the edge of the box with fifteen left to play. Of course he had to score – it is the unwritten rule of football that a player has to score against the team he has just left. 3-2, most difficult score line in football. The Lewes tank was well and truly empty and every Wingate advance over the half way line was met with a collective “oh shit”. Never had an appearance by a fourth official been so anticipated. But then Lewes won a free kick on the edge of the box. Ryan Fergany stepped up and curled a perfect kick into the corner of the net for his first ever goal for the first team. The keeper who had been struggling for most of the second half simply wanted the game to end. The Wingate centre-back, unhappy at the banter we were giving then offered us a lift home, or that’s what I assumed his comment about meeting in the car park after the game was. But the drama didn’t end there. 4-2 is the most dangerous score line in football after all. As Pleaty says, it’s harder to play against ten men than eleven so Chris Breach was shown a red card for an off the ball incident, seen only by a linesman 60 yards away in poor light and driving rain. It was Breachy’s second successive red card and whatever it was for it was unlikely in the circumstances to have been a one-sided incident. Full time, three valuable points, four goals and a great performance considering the youthful outlook of the team. Time for a final slice of top-notch hospitality with meat balls warming our frozen cockles. Hats off to Wingate and Finchley for their approach to the game at this level, it’s just a shame that more Spurs/Arsenal fans who live in the area don’t know what’s on their doorstep.
Share
Tweet
Share
Pins
Share
Like

About the GAC Stadium Once you emerge from a C S Lewis type country lane into the dell where the GAC Stadium is located you will feel like you are in another world. The ground is surroun...