Happiness is a game at Hamlet

Share
Tweet
Share
Pins
Share
Like
When London hosted the summer Olympics in 1948, the football tournament was spread around the capital with a few detours down to the south coast. At the time the amateur game had never been so popular, coming after the war when football-starved Londoners had been denied their regulars fix of the beautiful games, so the decision to use some of the classic old-school grounds was very popular with the public. Games were played at Lynn Road, Ilford, Green Pond Road in Walthamstow and Champion Hill in Dulwich. 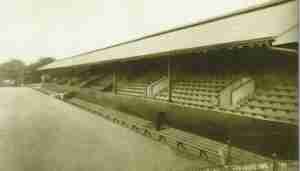 The first two grounds no longer exist, their history buried beneath supermarkets and executive-style apartments. But football is still played every week at Champion Hill although the ground has gone through a number of changes over the past 65 years. Home of Dulwich Hamlet, and their tenants, Fisher Athletic, crowds are a modest few hundred rather than the thousands that flocked here in the old amateur days in the innocent age of football including that gloriously typical English summer’s day in August 1948 in driving rain when South Korea beat Mexico. Dulwich Hamlet are one of the oldest clubs still knocking around the London Non Leagues. The club was formed in 1893, by Lorraine ‘Pa’ Wilson when Dulwich was an affluent village-like suburb of London, hence their rural name. Their greatest ever player was Edgar Kail, who scored over 400 goals for the club as an amateur who went on to win three caps for England in 1929, and turned down moves to professional clubs to stay playing for Dulwich, loving life at this level. Despite winning the Isthmian League just after the war, it’s been a story of near-misses characterised by the last few years which has seen play off defeats to Leatherhead and Bognor Regis Town in the past two seasons for a spot in the Ryman Premier League. But this season it could be third time lucky for The Hamlet. The lead at the top of the Ryman League South seems like a two-way love-in between Dulwich and Maidstone United, swapping top spot on regular occasions. This Saturday the two giants are due to meet at Champion Hill in the biggest game of the Ryman League South season. But it’s not all about the league. The Ryman Cup gives all clubs a shot at glory, albeit on a small-scale, and a look at past winners just shows how open the competition is.  In the past five years, the winners in every year, bar Bury Town last year, have come from the lower divisions including the likes of Tilbury, Ramsgate, Leatherhead and Wingate & Finchley.  So Dulwich Hamlet were in with as much as a shout as anyone this season.  After beating Eastbourne Town and Herne Bay, they faced Wealdstone in a third round tie on a chilly night in Saarf London, with a home tie against Kingstonian in the quarter finals a prize for the winners. With all of our work country managers over in London for a few days surely they would be keen on a Tuesday night slice of proper culture?  You can take your London Eye, your Madame Tussards and Buckingham Palace but what visitors, with limited time in London really want to see is an Isthmian League Cup game in South East London, right?  Well, apparently not.  Despite my best efforts to sell the game to the Danes, French, Germans and Swiss, the only takers I had were from Ben and Luge, both expats who actually lived a stone’s throw away from Dog Kennel Hill for many years.  Typical.  But never ones to turn down a trip to some Non League football we made the 13 minute train journey down to East Dulwich, only briefly stopping for some liquid refreshment at the Britannia along the way.  It promised to be a night of cup drama, intelligent conversation and freezing feet. Dulwich Hamlet 1 Wealdstone 0 – Champion Hill – Tuesday 15th January 2013 In a mirror of games being played in the FA Cup, was this really a shock result?  Not really.  Unfortunately the shoppers next door in Sainsbury’s stayed in the frozen foods aisle which was a good few degrees warmer than the action on the pitch in Champion Hill. Neither side put out first string sides, with Dulwich taking the opportunity to field a much younger starting XI. The difficulty clubs have at this level in trying to field full sides twice a week was clear to see as Wealdstone couldn’t name a full bench, although there were a few familiar names on show including Rikki Banks, Richard Jolly and Chris O’Leary. 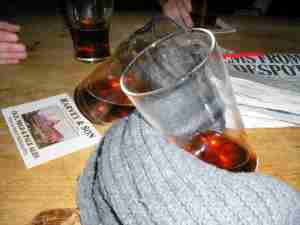 The home side always seemed to have that extra yard of pace, creating a number of good chances that saw Banks the busier keeper. Ellis Green nearly opened the scoring on the half hour mark for Hamlet when his shot from distance cannoned off the post. All this excitement drove us upstairs to the bar, and one of the better views in non league football. In fact the warmth of a radiator kept us there for the remainder of the game, despite Damon’s appearance with a prototype of the 500RTLF “Beerscarf” that he claimed kept him warm and his beer spillage free-standing on the terrace. Five minutes into the second half and Dulwich scored the only goal of the game. Oztomer sent in a corner which was well met by Turner forcing Banks into an excellent save but he was powerless to stop Ryan James forcing in the rebound. The goal sparked Wealdstone into life with the veteran Jolly causing problems for the Dulwich defenders nearly half his age. But Wilson in the Dulwich goal was a virtual statue most of the half, frozen to the spot (he should’ve bought his beerscarf). 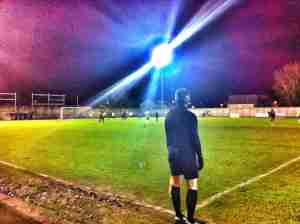 The game ended more with a whimper as the sub-90 crowd trudged out of the ground and into the cold South East London night. Wealdstone won’t shed many tears about losing in this competition, with their eyes still on the major prize, promotion to the Blue Square Bet South. Dulwich too hope that promotion will be on the agenda come what May. But whether the stay-away fans would see any action on Saturday is another story. With temperatures dropping by the second the prospect of any games making it through the “beast from the east” are already slim to none.
Share
Tweet
Share
Pins
Share
Like

Why let the pesky weather get in the way of your Christmas?  Well in the case of Lewes FC it doesn’t.  We were all very excited in the extended Fuller household at Christmas to be making ...