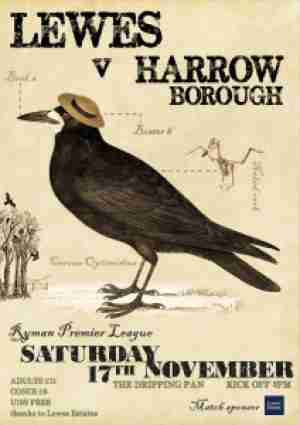 Just under twenty fours prior to the Saturday’s home game with Harrow Borough I got a text.  Nothing unusual about that – I tend to get a couple of dozen a day.  But this one requested my services.  Again, nothing unusual about that as I am a talented chap in the world of Brand Management, but this one was a demand for my voice. It’s been a few years since I prepared to go onstage and sing to a crowd.  Back in the early Nineties, my chum (In)Active Matt and I regularly used to wow crowds in the pubs and clubs of Chiswick.  It was a way to earn some extra cash but the rock ‘n’ roll lifestyle wasn’t for us.  We had artistic differences around whether we should become a tribute act.  I quite fancied turning our act into a Proclaimers Tribute act (Againstclaimers), whilst Matt wanted us to be Michael Bolton & the Wanderers.  So we split, agreeing never to pick up the microphone again.  But nearly twenty years later I was agreeing to step back onto the stage again, albeit as match day announcer for Lewes’s game against Harrow Borough. With Bob away, nobody fancied doing it.  “Hang on”, said Charlie “We have a Communications Director.  This is all about communication and directing so it is Stuart’s job”.  End of story. 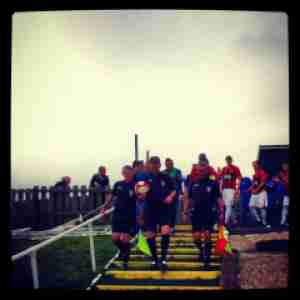 So I had a few hours to come up with some “patter” and “banter”.  Crowd engagement increases the audience experience, as I have always said.  So I put my thinking cap on, and remembered one of the best ever pieces of football commentary.  Let me take you back to September 1981.  The place?  Oslo.  The event?  Norway versus England.  The result?  Norway, ranked somewhere in the 60’s in world football took on and beat Ron Greenwood’s England.  To say it was a shock in world football is an understatement.  But it was the passionate reaction from a virtual unknown outside of the fjords, Bjørge Lillelien that would go down in history.  His 45 second rant against the English after the game is now legendary (you can hear it here) and my inspiration. His speech went down in history as a battle cry for David against Goliath. And with our form so far this season being in the “could do better” category, what better way for me to take the microphone and rally the Lewes fans after a win against Harrow with a slightly edited version, focusing on those famous residents of HA1.“We’re the best in the Ryman Premier League. We’ve beaten Harrow Borough. It’s completely unbelievable. Harrow, birthplace of giants. Todd Carty – you needed Tucker’s luck today? Where was it?We have beaten them all. We have beaten them all. Benedict Cumberbatch – You don’t have to be Sherlock Holmes to realise your boys were second best today. Patrick Moore – no use turning your eyes skywards, today’s defeat stares you in the face.Linsey Dawn McKenzie – what a set of tits your defence were this afternoon. We’ve beaten them all. We have beaten them all.Barbara Windsor can you hear me now? JLS I have a message for you. We have knocked you down a few places in the Ryman Premier. Peter André – as they say in your language in the wine bars around Harrow on the Hill – your boys took a hell of a beating! Your boys took one hell of a beating.”I couldn’t wait to stand in the middle of the pitch rallying the fans….of course we had to win first but that was long overdue.  What could go wrong? 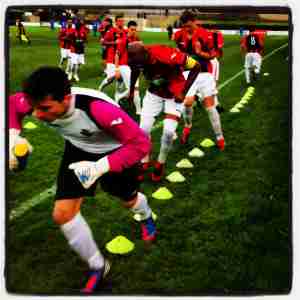 It had been a long week in TBIR towers. I was forced to sit out the nil nil draw with Hendon on Tuesday, although it didn’t sound like I missed much. Morale boosting trips to the troops in Stockholm and Copenhagen had seen delays of over 5 hours due to fog, and even the debut of the Tuborg Julebryg, the Danish Christmas beer, didn’t lift spirits (OK so it did for an hour or two). The Movember moustache was at the difficult point of being constantly moving in the corner of my eye, leading to excessive top lip wiping and to top it all I found out that I hadn’t actually won €67 million in the European Official Lottery despite the email I received from David Cameroon (sic). A pint of Harvey’s, a Rooks Pie and a chance to deliver my speech when we won would be the perfect tonic. Not too much to ask for is it?Lewes 1 Harrow Borough 1 – The Dripping Pan – Saturday 17th November 2012As Meat Loaf famously sang, “Two out of three ‘ain’t bad”.  But in this case I would have traded the Harvey’s Blue Label and the Steak and Ale encrusted in pastry for the win.  It was a frustrating afternoon, summed up by the fact that there were goals galore everywhere else in the division, yet at The Pan the game’s two decisive moments both came within ninety seconds of each other, and both definitely down to big defensive mistakes.The first half saw both teams create a number of good chances.  Harrow’s centre forward was Danny “The Unit” Buckle, a player who had a spell at Lewes a few years ago and earned legendary status for his mobility and first touch.  It was good to see that he showed no sign of losing his instinct for goal, blazing wide after five minutes when the whole net gaped open. At the other end, all the talk of the Jungle was the various Movember moustaches on offer.  We had ex-Lewes Director Nick Williams’s Hulk Hogan effort, Cynical Dave’s Ron Jeremy but the star of the show was undoubtablyDave Lamb.  Not only was he sporting a Clark Gable, but had also slipped on a smoking jacket and a snazzy scarf. Twenty minutes in and Lord Plumpton remarked how poor Lowestoft compared to their league position.  Puzzled faces all around..”You mean Harrow?”..”No, I mean Lowestoft.  Don’t you know who we are playing today?”.  When we told him, he asked if he could get his money back as he was here on false pretence. Jim is a Stoke fan.  Let’s leave it at that. 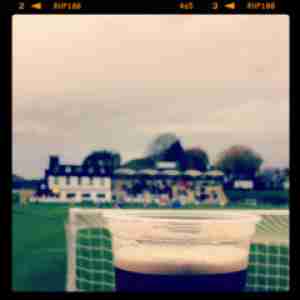 Despite striking the post and seeing the Harrow keeper Elvijs Puntins pulling off a couple of good saves, it somehow remained scoreless at the break.  I did my announcements and filled my pockets with boardroom sandwiches ready for the second half.  I didn’t have to wait long for the first piece of action to announce.  After spending a minute or so eulogizing the form of Lewis Hamilton this season he then under hit a pass-back to Thorp.  Thorp tried to clear his lines but his kick was charged down by Harrow Borough’s Akinola and the ball rebounded off his shins and into the empty Lewes net. No sooner had I completed my announcements about the golden goal than I turned around to see the ball rolling very slowly towards an empty Harrow net.  I had no idea what happened.  I waited for the announcement to tell me who scored, then realised people were looking at me.  Shit.  I had no idea who scored, so I told it like it was….”And the scorer of the equaliser for Lewes was….” I paused, looked towards Deaks, Dave, Kev, Jim…anyone…but they hadn’t seen it either…”I don’t know but what the heck, it’s one all!”. It turned out it was Anthony Thomas, capitalising on a mix up between the keeper (Elvijs had certainly left the building) and the defender.  This was a winnable game.  It became even more so when the Harrow skipper Burgess was sent off for a second (harsh) yellow.  He was soon joined by BBC Non League Show’s and Harrow Borough’s manager, Dave Anderson, sent to the changing rooms by the referee.  His crime?  He said to the referee “You are like a kid on Christmas Day”…Abuse?  Threatening?  Racial?  Offensive?  None of the above.  Poor decision. 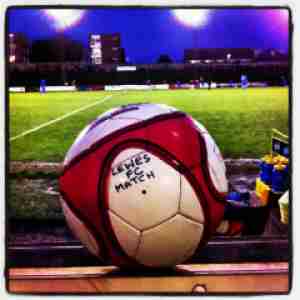 Harrow finished the game the stronger and whilst Lewes had the man advantage, they couldn’t force the possession.  So it was another win-less game, although it meant our unbeaten league run at The Pan now stretched back to August. But my most disappointing part of the afternoon was that I couldn’t deliver my eulogy.  Instead I had another pint of Harvey’s thrust into my hand in terms of payment for my service.  Perhaps it’s not too late for me to make it as a performer..on second thoughts, I couldn’t cope with all that underwear being thrown at me – you never know where its been!

About The Throstles Nest A typical old fashion non league ground with a main stand that runs for a third of the way down the touchline and a covered terrace area behind one goal.  After ...