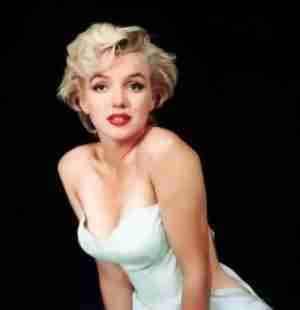 For my regular readers from California, Brentwood is not just a posh suburb in West Los Angeles, once the home of the world’s most desirable women, Marilyn Monroe. It is also a small commuter town just on the outside edge of the M25. Do not be confused that the wide palm-lined, posh houses and exclusive country clubs are interchangeable between California and Essex. Orange juice is almost on tap in LA; in Essex Orange juice is the default colour of the girls fake tan. Ever since Lewes had been drawn against Brentwood Town in the FA Trophy (sponsored by Carlsberg lest we forget), I’d been looking forward to this trip more than my annual visit to Los Angeles. Well, nearly. Playboy Mansion (have I ever told you I’ve been there?) or Kelvedon Secret Nuclear Bunker? Difficult toss up I’m sure you will agree. One is full of hidden secrets down below, and the other is a secret nuclear bunker…boom boom. But I still get a wee bit excited about visiting a new ground, and The Brentwood Sports Arena ticked that box. 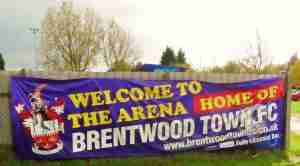 I’d only been to the town once before – a job interview in the Forte Posthouse just off junction 28 of the M25 but had never sampled the delights of the home of The Only Way Is Essex. With cup fever gripping Lewes, we came in expectation rather than hope. Brentwood Town had been mainstays in the Ryman League North for a number of seasons, one level below Lewes. Whilst the Rooks league form had been patchy to say the least, this was the cup and the smell of Wembley was in our nostrils. Not that horse-shit, greasy burger smell but the whiff of a day out in the sunshine and a chance to wear our rosettes and hold young George’s tinfoil cup up with pride. Whilst Lewes had overcome a tough-looking tie against Lowestoft in the previous round, Brentwood’s had been a bit more controversial. After their win at Walton & Hersham in the previous round an altercation in the attendance of just 79 led to eight police cars, including police dogs, having to attend the ground to restore order. Yep – you read that right. Eight police cars to deal with an incident in a crowd of 79. Must have been a slow day in south-west London that day. Who said passions don’t run high even at this level? This game was also the first anniversary of appointment to the board of Lewes FC. The annual elections this week had seen two of the original Rooks125 group stand down (Patrick and Nick), with three new faces taking their place around the boardroom table. I’m often asked what it’s like to be a director of a football club. Well, it’s a rollercoaster of emotions most of the time – decisions like funding for the new toilet block do not happen on their own you know. I’m still mighty proud of my role at the club and what we are trying to achieve. The road is long but worth it in the end. And an opportunity to advance in a cup competition is what the job is all about. Oh, and of course the prize money will come in handy for the kids Christmas presents. 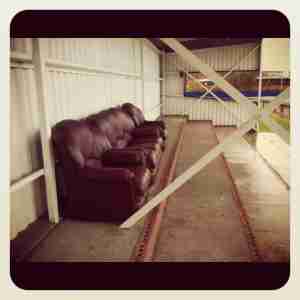 Saturday morning dawned and after a visit to the temple of the retail Gods at Lakeside, a sneak early morning screening of Bond and then a visit to the Secret Nuclear Bunker (don’t worry kids I bought a map off a bloke in a rain mac in the pub to find it), it was game time. Brentwood is one of the top 20 richest towns in England and is home no less to Amstrad. back in the day, that was considered a luxury brand. you were a nobody jn the 6th year at school unless you owned a ZX Spectrum +2, manufactured here in deepest, darkest Essex. Sir Alan Sugar’s old factory is now a Premier Inn and if you ask nicely you can stay in the Satelitte Dish suite, or the Video Phone lounge. it is also home to such D-list stars as Jodie Marsh, Amy Childs and of course the birthplace of Sir Trevor Brooking, who is still the king of stooping headed cup final goals – a title he is surely never going to lose. Contrast that with Tom Brady, Reese Witherspoon, Fergie and Arnold Schwarzenegger in the US version…hmmmm. The early morning sunshine had been replaced by torrential rain as I arrived at the pub to meet the Lewes Lunatic Fringe.  We drove up to the ground, feeling the anticipation of the locals and the smell of cup fever. Then Deaksy pointed out the slurry pit in the distance. We headed into the Sports Centre, assuming there would be a bar in there.  Right?  Nope – just a massive Bring and Buy sale going on and a coffee shop.  The look on Dave’s face was akin to him parting with £50 to watch a Premier League game.  So off we went into the “Arena”, being the first paying spectators to enter the ground. It is a remote venue, with countryside all around. The largest attendance at the ground in recent history was in 2007 when over 1,200 for a charity game West Ham Boys of ’86 (Parkes, Cottee, Devonshire and the like no WHU team has seen since). Today it looked as if the attendance would struggle to break the three figure barrier.  But they did have a nice three-piece suite behind the goal.  They have missed a trick by not naming this the DFS Stand though. Brentwood Town 3 Lewes 3 – The Brentwood Sports Arena – Saturday 27th October 2012 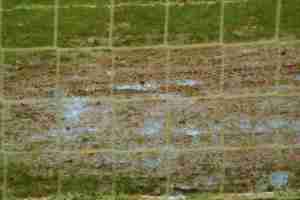 Rain, Sleet, Sunshine and goals – for seasons in one 3 hour spell in deepest, darkest Essex.  Not that our visit will stay long in our memories.  It certainly wasn’t a six goal thriller, more like a lesson in how not to defend.  Three times Lewes fell behind to poor errors of judgement, three times they hauled themselves back into the game, earning a replay on Tuesday back at The Pan. We were lucky enough to start in sunshine, although the rain was never far away.  A gloriously muddy pitch was certainly a leveler, with both teams trying to play the ball wide to avoid the boggy central area. The home side took the lead half-way through the first period when the back four simply fell asleep and let a long ball sail over their heads and the Brentwood players were quick onto it, crossing low for Alex Read to stab home.  Fortunately, the lead only lasted ten minutes.  Beckford’s free-kick was swept into the area and as Breach went to head it, his shirt was pulled.  Referee looks at linesman, he raises his flag, penalty given.  Or was it?  Brentwood’s players claim the linesman was flagging for offside, but the referee was having none of it.  Not the first time this afternoon the officials would have no idea what was going on. 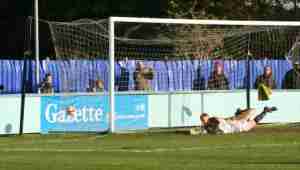 Anyway, penalty to Lewes and Beckford stepped up and smashed it home – one all.  However, the major talking point came a few months later.  A long through ball saw Thorp come out to claim the ball at the feet of the onrushing Brentwood forward.  Instead of pulling out of a challenge he was never going to win, the forward simply slid in with both feet raised.  He missed the ball, now in Thorp’s hands and slid into Thorp studs raised.  We all heard a crack and the keeper lay motionless.  The referee tried to restore some order as the players reacted on both sides.  He consulted his linesman who had a perfect ball and returned to the pitch to issue a….yellow card. There was few people who saw the incident who could have expected anything less than a red card.  Fortunately, the crack we heard was Thorp’s shinpad snapping, not his leg.  The linesman told us that he only got a yellow because “he went for the ball”.  The ball was a) already in the keeper’s hands b)a yard away from where he slid into Thorp with both feet up.  A case of a refereeing completely bottling a decision. After an aborted attempt to get any food or drink at the most chaotic refreshment kiosk ever, we restarted the second half full of hope.  Alas that hope lasted just a few minutes as Read was sent clear, seemingly a few yards offside and he slotted home.  Surely this wasn’t going to be another Leiston/Chertsey Town/Harlow Town?  It certainly looked that way for twenty minutes when Lewes huffed and puffed without really creating a chance. 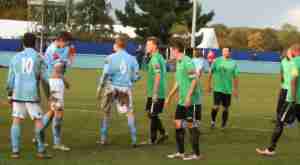 But then Wormull pulled his masterstroke, bringing on the dynamic duo, Crabb and Godfrey to play down the middle.  Within minutes they had combined to draw Lewes level, when Godfrey had received the ball with his back to goal, turned and scuffed his shot which rolled painfully slowly into the net off the post.  Phew, we’d played our Get Out Of Jail Card.  Well, at least for a minute as Read once again exposed the Lewes flat back four and he slotted into the corner.  Have I mentioned Harlow and Chertsey yet? But in a game that had a little slice of everything, Lewes once again came back and scored a third equaliser when Chris Breach smashed home the ball from close range after some penalty area pinball.  Three-three and we’d have to do it all again on Tuesday.  Sorry Lowestoft Town but you’ll have to wait for another day to visit us.  Lewes were in the hat for the next round at least, albeit after living on a wing and a prayer.  The team certainly couldn’t complain about the lack of support.  By my rough count in the second half I counted 43 Lewes fans/officials in an official attendance of 118. Who needs the beaches of Santa Monica, the glitz of Hollywood and the glamour of Beverley Hills when you can have a cold cup of tea in the freezing rain of Essex?

It may have escaped the attentions of thousands of football fans in England who get their kicks watching the Premier and Football League in recent weeks, but us little old Non-League club...