Share
Tweet
Share
Pins
Share
Like
I always try to find a mildly amusing title for my blog posts that is in some way related to the place I am going. For reasons that will become apparent when you read on, I wanted to know what the advertising slogan for OXO was. So I typed it into Google and had to wipe my eyes when I saw the fourth answer (as I write this it has actually now risen to the most popular result thanks to my work):- “Center Parcs & Anal Sex” I assumed I had ventured down a road I should not be looking at, especially on my work laptop but it was onMumsnet.com, a very well-known “clean” site. I have no idea how the monster of search throws up the answer (the magic of Google’s dark art) but I am assuming it wasn’t the marketing slogan Professor Liebig thought of back in 1859 when he made the extract of beef that was to make the goodness of meat affordable to the poor (his words not mine). With Center Parcs not established until 1968 in Europe I think we can deduce that there is no link between OXO or Center Parcs so we can move on and the link between the two shall forever be a mystery. 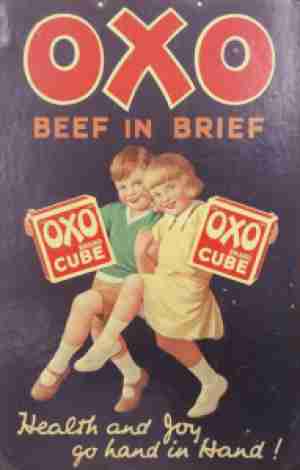 So, Worksop. Yes, indeed. When I told people I was going to Worksop, the stock (see what I did there? OXO, stock? I’ll get my coat) answer was “You’ve been to Worksop before, right? as if there was some dark secret about the town. Actually I had been to Worksop before, and I could in some ways understand the nature of the question. Let me take you back to March 1992 when we were all a big younger, freer and singler. A few friends of mine had plan was to drive up to watch Leeds United v West Ham at Elland Road but being young and naive we thought it would be a good idea to have. House party, which soon became a street party. I can still remember dancing with some foxy blonde at 4am to Rick Astley, thinking that sleep was over rated. Of course we slept through the warm, and then woke up to carnage. This wasn’t a five-minute clean up job, and so our 9am departure turned into a 12pm. Three hours to drive 210 miles to Leeds? No problem. At 2.30pm we’d reached junction 30 on the M1, our dream in tatters. So we admitted defeat and headed for nearest point of civilisation which happened to be Worksop. What followed was an afternoon of drinking in the town centre. All the pubs seemed identical, with the same looking people, same beers, same fruit machines and same music playing. If Groundhog Day had been released a year earlier I would have assumed we had wandered into our own Bill Murray-hell. Come 5pm and everyone disappeared. We headed down a deserted High Street, concerned we had missed the for minute warning. After a further drink we moved on, only this time the town centre was packaged with the same people as earlier, only this time in their Saturday night best. And then every pub we went into was the same, albeit with the women dolled up. So back to the future, and a return to the global home of OXO. Now here is another relevant bit of trivia for you. In 1908 when the Olympics were first held in London, OXO were the “official beefy drink” provider, with every runner being given a cup of the drink when they finished a race. It may surprise you to learn I was here for a bit of football (really? Thats a surprise). The US film, and hit TV series Friday Night Lights was inspired by Friday night games here in Nottinghamshire, where passions run deep. I had made the journey across from our Northern HQ for the start of the 2012/13 FA Vase sponsored by Carlsberg with Worksop Parramore hosting Glasshoughton Welfare at the Windsor Food Service Stadium. Cup clashes do not come bigger than this in North-West Nottinghamshire.

Worksop Parramore were originally formed as the works team of the iron foundry F Parramore & Sons back in 1936 based in Sheffield. They played in the local South Yorkshire leagues until they joined the Central Midlands League, moving into Don Valley Stadium. Two years ago their manager, Peter Whitehead misheard a request from the chairman to “buy a round for the team” as “buy a ground for the team” and came back from his day out with the squad in Worksop with the keys to Worksop Town’s old ground in Sandy Lane. He wasn’t happy, nor were the squad who had to pay for their own blue WKD all day. They changed their name, nevertheless and have not looked back, rising up to the Northern Counties Premier League. This was a club on the up and ready for a charge on Wembley. Standing in their way was fellow Premier League side Glasshoughton Welfare, who famously fielded Bruce Grobbelaar in a game, years before the “Wembley experiment” that went so horribly wrong in midweek. I met up with Worksop’s very own premier football correspondent for some pre-match liquidation. South America has Tim Vickery; if a story breaks in Spain then the media call up Dr Sid Lowe and for all the Polish news we have Ryan Hubbard and Polish Scout on the batphone. In North-West Nottinghamshire there is only one man to turn to, and that man is Beat The First Man. This is a man who knows the politics of the whole Worksop Parramore v Worksop Town debate, the inner workings of Retford United and of course the hold-codes at every fruit machine in all working men’s clubs this side of the M1. His website is a thing of joy, beauty and amazement on all things that make the beautiful game beautiful (i.e no pictures of Rooney, Lumpard or Cole) Our meeting spot was the best pub in Worksop, naturally. The Mallard is not named after a duck, or located anywhere near a pond but after a steam train. In fact it didn’t used to be a pub at all – it used to be the station waiting room. And as it is a real ale pub it has a perfect audience – train spotters meet CAMRA fanatics. All it needed was a couple of ground hoppers and it would have the full set of sad individuals. 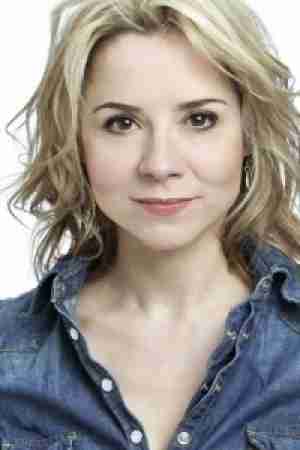 So after a pint of Rat, we headed off to try to find Worksop’s pint of glamour,Sarah Jane Honeywell. Having had to sit through hours (days) of children’s TV in my time I’d put her in my top 10 along with the original cast of Hi-5 and Phillipa Forrester. Whilst we didn’t find the lovely Sarah, we did narrowly avoid the “stag do” who were due to arrive in he pub. Stag do in Worksop..hmmm. Isn’t the stag do supposed to herald the “end of single life” and give a lifetime of memories for those long winter married nights. We arrived at the Windsor Foodstuff Stadium just as the teams make their entrance. Of course this being step 9 in the English Football Pyramid, where average attendances are often less than my waist size, and in a competition sponsored by one of the world’s biggest brewers, you would expect we could enjoy a shandy or two watching the game. Alas, no. This is England. The thought of 35 or so fans enjoying a beer whilst watching the game can see you prosecuted as a criminal. Worksop Parramore 1 Glasshoughton Welfare 2 – The Windsor Foodstuff Stadium – Friday 31st August 2012 On a night where all the drama was taking place in the medical rooms up and down the Premier League, the FA Vase (sponsored by Carlsberg) delivered its first real shock as Glasshoughton pulled off a smash and grab victory at Sandy Lane. 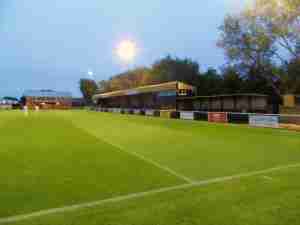 League form saw the hosts come into this game as odds on favourites. If I was a betting man (and I could have technically bet on this game as Lewes FC do not take part in the competition) then I would have staked the Little Fuller’s pocket money on a home win. Worksop have started the league campaign with 6 wins out of 7, winning all three home games so far. But their recent results have exposed a soft underbelly when it comes to defending. It seems they follow the Harry Redknapp school of tactics, simply concentrating on scoring one more than the opposition irrespective of how many they get as the 5-4, 4-3 and 5-3 score lines suggest. But the visitors were hardly in form, having only picked up four points so far this season which makes the win even more impressive. The Windsor Foodstuff Stadium is a non league ground of beauty. I am reliably told it has one of the finest playing surfaces seen this side of the Watford Gap and one where Ronnie O’Sullivan often practices on before heading up to Sheffield each April. The club house is newly refurbished, and offers a warm and dry safe haven, even on an August night (it is irrespective what month you now say it is in England as they are all characterised by rain). A nice pint of Stones Cold would have made a perfect accompaniment to the second half but, according to the FA, it may have turned me into a crazed football hooligan. The game was played out in constant drizzle when helped both teams play he ball on the floor. The first half saw little goal mouth action but the second was a belter with the visitors taking a two goal lead thanks to two well worked goals, the second a smart finish from an almost impossible angle, which sent the away fan into raptures. Worksop then proceeded to get angry with the cross bar, hitting it twice before they managed to pull one back when a home player bundled the ball home from close range. A late surge from the home side came to nothing and the final moment of the game saw the referee red card Workshop’s final substitute for a “lunge” before bringing their Wembley dreams to an end for another season. For Glasshoughton the road would take them to Manchester and a visit to Maine Road in the next round.

I wandered back to the car, taking in the beefy air, having enjoyed my return to Worksop a lot more than I did nearly 20 years ago. The drive home took me passed the OXO “tower” where I stopped and paid homage to Professor Liebig with a salute. Men like him have helped put the Great into Britain and his contribution to civilised life today can never be underestimated. Right – SatNav set to Boston then.
Share
Tweet
Share
Pins
Share
Like

A Gray day I could Ilford to miss

Some time very soon we will be up in arms about the death of another football club in London. It is a beautiful sunny Saturday afternoon at 3.05pm and I have joined barely 150 other payin...