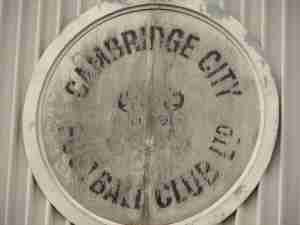 The City versus United debate is not one that is restricted just to Manchester in England. Oh, no we also have the situation in Oxbridge.  When I was at school I often wondered where Oxbridge was, and why the toffs got to sit a special exam to go there (It was like Hogwarts in my imagination).  Years later I realised it was an abbreviation of Oxford and Cambridge, and both have a City and a United too.  In cities, it is the United’s who have had the most success, but it is the City’s who won the right of the name (stop press – we also thought of Lincoln having both a United and a City during half time). In Cambridge’s case the team started off as Cambridge Town back in 1908, competing in the regional non leagues until the Second World War.  In 1951 good King George VI had a night out in Cambridge, enjoying a punt on the Fens, a pint in The Anchor, and a gentleman’s dance in Talk of the Town and agreed to give the city City status.  Both football clubs saw an opportunity to rebrand themselves and wrote a letter to the city’s Alderman and because Town’s application had a first class stamp on and arrived in the morning post, they were granted the title.  Arise Cambridge City. However, it was United who had the success, being elected into the almost closed-shop of the Football League in 1970 to replace Bradford Park Avenue.  City tried to follow suit, applying time and time again for a place in the league.  They were attracting bigger crowds than their cross city neighbours, often welcoming crowds of 10,000 for non league games.  But the Football League were having none of it, and after their last application in 1974, City realised that their place was in the non leagues. The two teams headed in different directions during the late Seventies and early Eighties, with United hitting the heights of the second tier of English Football, whilst City found themselves in the Southern League Midland Division playing the likes of Moor Green in front of a few hundred fans. 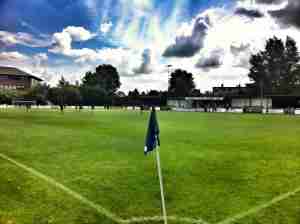 Whilst the inter-city rivalry always existed, it never reached the same heights of other provincial towns.  United fell on hard times in the early years of this century, ironically at a time when City enjoyed their best period in decades, bringing the clubs within one division for a couple of seasons.  However, City’s Achilles Heel in the past ten years has been their ground. Milton Road has been City’s home for ninety years.  It was for many-a-year one of the biggest in Non League football, and reflective of their status as one of the Non League giants.  However, financial problems saw the ground fall into disrepair, and despite an attempt at introducing greyhound racing, the club were forced to sell off part of the ground for redevelopment for office space in 1985.  A few years later I had to visit a client in this building and admired the ground from his office.  All of a sudden he produced a football and within minutes we were having a kick about in our suits, using a Danny Last inspired magic door into the ground. Then all sorts of legal shenanigans took place that saw the club evicted, re-housed, demoted, unevicted and finally given notice to leave.  Through a number of legal loopholes, petitions and sheer dedication from a faithful few, City will start this season for the final time at Milton Road.  This time next year they will be playing their home games down the A14 at Newmarket Town’s Jockeys Cricket Field Road whilst the bulldozers will finally have the chance to do their worst.  The club still dream of a new Community Stadium on the edge of the city but without a financial model in place that could be a few years away. Every year the two clubs meet in a pre-season friendly for the bragging rights of Jesus Green.  It has always been a fixture to tick off, especially with Milton Road on borrowed time and so when Danny suggested a day out in the city, my hand went straight up in the air.  A few real ale pubs, some long-awaited sunshine and the cut and thrust of a local derby.  What more could a man ask for (apart from the love of a good woman, but he wont be discussing the goings on between myself and CMF on these pages I can tell you). 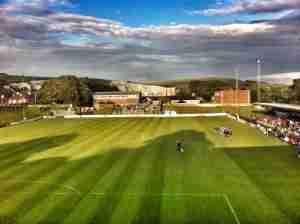 Apparently last night I had ended up at The Dripping Pan to see Lewes v Crystal Palace.  I say apparently as I had spent the day at The Oval with Sleepy John, Fat Matt and my brother.  This annual JBO starts at 8am in Weatherspoons and normally ends around 8pm.  But last night I must have used the early finish due to the rain to get on a train, go down to the Pan and still manage to make it home before midnight.  Palace won 5-1 but my memories of the evening are hazy to say the least. An early start on Saturday wasn’t what the doctored ordered but with the Olympic Torch passing down the end of our road at 8:58am I was up and ready (ironically almost a year to the day when another man ran down the same street with a flame in his hand, although that was a petrol bomb) with one question on my mind –  City or United?  My foolproof method was simple in its genius.  If the first student I saw on a bike that caused me to swear due to their poor road handling ability was female I would support City; male and it would be United.  We’d only left the motor way for a mile or so when a tandem, ridden by a old woman and a man swerved out in front of us.  Bugger – so the draw it was then. After meeting up with Mr Last and Mr Deacon, along with Foreign Office Phil, we headed to the Live and Let Live in the backstreets.  Perfect small little pub with a range of a dozen ales.  Four locals in their usual positions at the bar ready to pass judgment on any beer you ordered..”Oooooh, you don’t want the Summertime Breeze.  You want a pint of Punting Crick..although you’d have to invent a time machine and go back to last Saturday”..oh how we all laughed.  We ordered a taxi to take us to the ground from the pub and right on cue the barman rang the bell at 2.30pm to tell us it had arrived.  Well, not quite.  He was calling last orders….at 2.30pm…on a Saturday…in a city centre…in the 21st Century…Welcome to Cambridge. Cambridge City 1 Cambridge United 3 – Milton Road – Saturday 24th July 2012 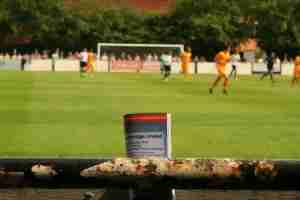 There is no better place to be on a Saturday afternoon than standing watching football in the sunshine with a beer in your hand.  I’ve been to some fine places in my time (Have I mentioned my trip to the Playboy Mansion before or even flying to Vegas First Class after a big win at PartyCasino?) but few can match the feeling.  Today was a perfect example.  Good company, boisterous crowd and even some decent football.  I was so filled with bonhomie that I left Danny Last loose on the camera (on loan from James Boyes’s Camera Emporium). Our first major chuckle of the day was when the teams were announced.  Captaining Cambridge City was Adrian Cambridge.  Of course it was.  Every team should try to make the effort to find a player with their surname.  The Seagulls wouldn’t have to look far as James Brighton was lining up for United.  The City mascot took to the field clutching her doll – again, something that the branding police at a Premier League club would never let happen.  Formalities over it was time for some action. 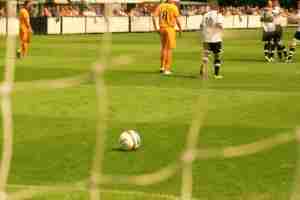 We didn’t have to wait long for the first bit of class.  Just over five minutes on the clock and  David Prada superbly chipped the ball over the United keeper to put the hosts 1-0 up.  The goals here at Milton Road got our thumbs up.  Trevor Brooking stanchions (what do you mean, What?  Look here for the legendary moment in footballing history)and nets so shallow they put the old ones from the Dell to shame (Hang on, what do you mean, Where is the Dell?  Football history 101…ok – look here).  It was almost impossible for any ball to “nestle” in the back of those. Despite the backing of the United fans in the small wooden stand who, in case you wonder, are going to “win the league this year” (I think the betting experts such as Blue Square think otherwise, having them at 16-1 for the title), the visitors struggled to break down an organised City team.  Dave Theobald almost doubled the lead for City and the excitement became too much to bear so we headed inside for a beer. The second half saw United make a host of changes, including Michael Gash who proved to be a cut above the rest, netting the equaliser with a smart header.  No fannying about from young Michael I can tell you although City felt that the original ball in from Moko had been from an offside position.  They scored a second soon after when Gash’s beavering away set up Moko and his cross this time was finished by Luke Berry. United showed the difference in league position in the final fifteen minutes, looking fitter and more comfortable to sit back on the ball.  The third came towards the end when Thorpe’s long-range effort took a wicked deflection and sailed over the City keeper.  Three one was on the balance a fair result for an enjoyable afternoon of football. 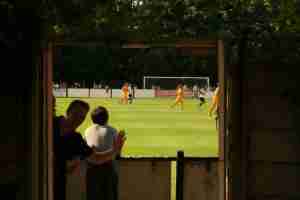 It is always a shame to see traditional grounds like Milton Road meet their maker but that is the world we live in today unfortunately.  Despite the tireless work of the club and from the core support of the fans, economics mean that they simply cannot continue to play here.  Whilst the move down the A14 to Newmarket will be a bitter pill to swallow, if it is a stepping stone to an eventual return to the city then it is a necessary evil.  Having seen the positivity at Maidstone just seven days ago after the inaugural game at the Gallagher Stadium, there is proof that short-term pain can give long-term gain. We couldn’t go any further to the end of the spectrum that our next football outing in just five days – the Olympic Games….stay tuned for all the thrills of Honduras v Morocco from Hampden Park. For more photos from the day including those taken by my official Artistic Director Mr Last, head over here.

The Future of Non League Football – The Inequalities of the leagues

In the first week of May the play off semi-finals took place across most non leagues.  However, whilst the fans at Dulwich Hamlet, Bognor Regis Town and Lowestoft Town stood enthralled at...