The Future of Non League Football – The Inequalities of the leagues

Share
Tweet
Share
Pins
Share
Like
In the first week of May the play off semi-finals took place across most non leagues.  However, whilst the fans at Dulwich Hamlet, Bognor Regis Town and Lowestoft Town stood enthralled at the tense ending to their games, the semi-finals at Sutton United and Basingtstoke Town were less so.  In all instances the games were settled by one goal or in the case of Bognor, on penalties.  But in the case of the Blue Square Bet South games it was simply half time.  Welling United and Dartford took their one goal away wins into their home legs the following week.  Unfortunately, for Wealdstone, Folkstone Invicta and Godalming, their seasons were over. And therein lies the problem.  After 42 league games stretching eight months most teams existed the play offs after a one off “Cup Final”.  So why does the Blue Square league structure have two legged semi-finals (just like the nPower Football Leagues) whilst every league below that has to make do with a 90 minute (plus extra time and penalties) scrap?  Is that fair? We think not. 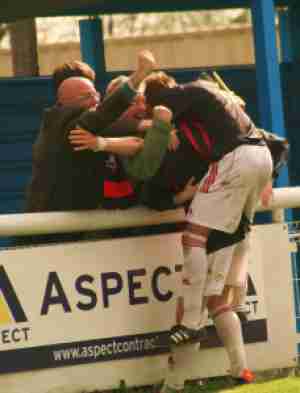 The leagues will wheel out the same old story about needing to finish the season as early as possible to get ready for the next season, but what difference would one more game make?  The Blue Square North and South play off finals do not take place until mid-May, so why not play ALL play off finals on one weekend.  By the time the two teams who will be entering the Blue Square Bet Premier are decided, the feeder leagues will be done and dusted and the players will be on their way to the beach (well, Skegness then). How difficult would it be to have one additional game for the teams in the playoffs?  Who would be the loser in that?  The four clubs involved would see additional gate receipts, which based on the attendances for the one off semi-finals would be substantial.  For instance in you look at the six games played at Step 3 of the Non League Pyramid:- AFC Hornchurch (average 310) v Bury Town (average 420) Lowestoft Town (average 668) v Wealdstone (average 502) Bradford PA (average 408) v Hednesford Town (average 638) Chorley (average 957) v FC United of Manchester (average 1,948) Oxford City (average 241) v Cambridge City (average 348) AFC Totton (average 438) v Chesham United (average 349) For each of the play off games the attendances were higher simply because of the status of the game.  AFC Hornchurch saw 646 for their game,  Lowestoft Town 1,146 for theirs. So if you take a conservative multiple of 30% on top of the normal home attendances, an additional game would have resulted in crowds such as:- Bury Town – 546 Wealdstone – 652 Hednesford Town – 829 FC United of Manchester – 2,532 Cambridge City – 452 Chesham United – 453 A total of 5,464 extra fans, who would have paid a minimum of £9 for the privilage.  And I would imagine based on previous crowds for big games, the figures for Bury Town (Highest attendance of season 868), Wealdstone (876) and FC United of Manchester (3,142) are grossly underestimated. Based on the fact that all leagues were completed by the 28th April, surely there could have been time to fit in two play off semi-finals in these leagues, with the Final being played on the weekend of the 12/13th May – the same one as the Blue Square North and South.  Revolutionary idea or just fair? Some traditionalists will argue that the play offs are not a fair way of settling the end of season promotion places but this year we have seen a play off final featuring the 2nd v 3rd place team in three of the five leagues from step two and three (with the 2nd place team so far winning in two games). So in light of all of our changes this one is a win/win for everyone is it not?  It adds an extra element of competitiveness into the final shake up for places, it gives the clubs involved significant extra revenues and it keeps supporters interest up for a few days more before the barren summer months.
Share
Tweet
Share
Pins
Share
Like